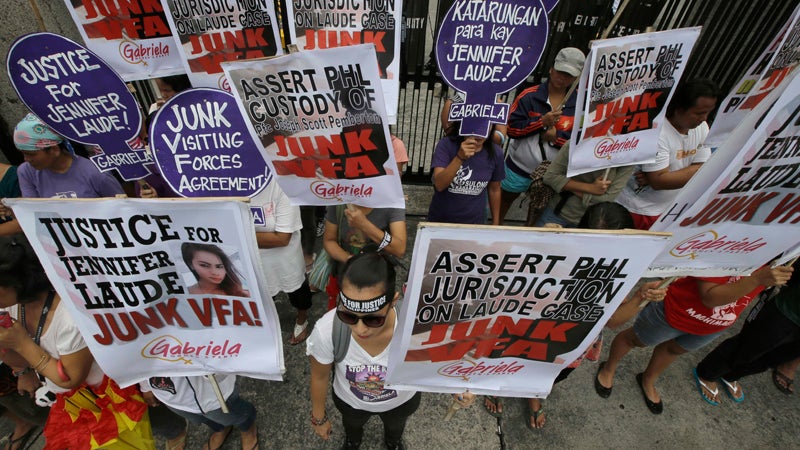 Protesters, mostly supporters of LGBT (Lesbians Gays Bisexuals and Transgenders) display their messages during a rally at the Department of Foreign Affairs to demand justice for the killing of Filipino transgender Jeffrey "Jennifer" Laude with a U.S. Marine as a possible suspect Wednesday, Oct. 15, 2014 at suburban Pasay city, south of Manila, Philippines. The activists demanded that Washington hand over to the Philippines a Marine implicated in the killing of Laude which the demonstrators labeled a hate crime. (AP Photo/Bullit Marquez)

“We are deeply disturbed with the negative comments online reeking with hate, homophobia, and transphobia. Many posts blame Jennifer for her own murder and even condone hate crimes” Kapederasyon spokesperson Corky Hope Marañan said in a statement on Friday.

Marañan was referring to comments on Facebook calling Laude a “flirt” who purportedly deceived suspect US Marine Joseph Pemberton into sleeping with her.

Some netizens also blamed the death on Laude herself for being a transgender, which is the general term for those who identify their gender as opposite from their biological sex.

“(T)hese outbursts of discrimination shows how hostile some sections of the Philippine society can be towards people with different gender,” Marañan said of Laude, whose real name is Jeffrey but goes with the name Jennifer.

Marañan appealed to netizens to be sensitive about what they post about Laude online.

“Instead of adding insult to the already grave injury by posting hate-filled comments, we urge them to use their time online to expand their understanding on the issue,” Marañan said.

Laude on Saturday was found lifeless on the floor of the Celzon Lodge in Olongapo city. She was believed to have been strangled to death.

Laude supposedly entered the hotel with a male foreigner, who was later identified as Private First Class Joseph Scott Pemberton who was in the country for the joint military exercises between the US and the Philippines.

The suspect is held onboard the USS Peleliu while a joint Naval Criminal Investigative Service and Philippine National Police investigation is ongoing.

This is not the first time a US soldier was accused of a crime while in service in the country.

US Marine Lance Corporal Daniel Smith was accused in the Subic rape case and was convicted by a lower court to 40 years imprisonment but an appeals court reversed the verdict after the victim identified as “Nicole” retracted her statement.