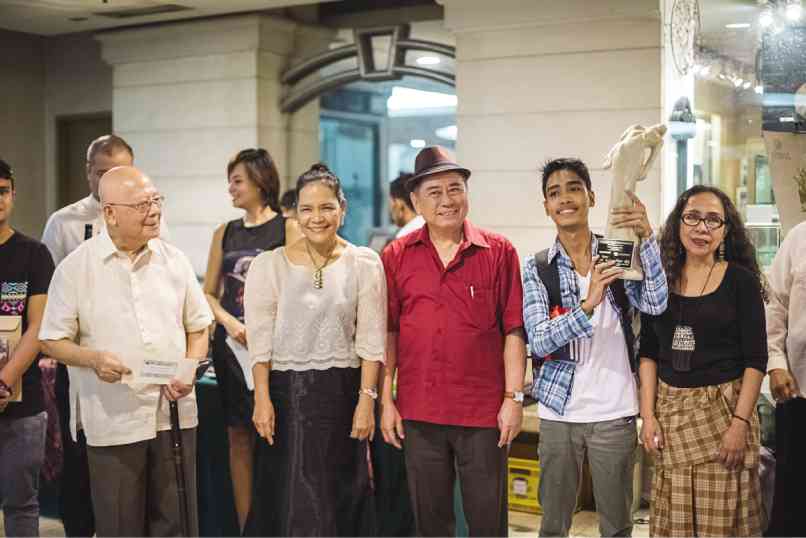 The 2014 Maningning Miclat Art Competition was a celebration not only of art and creativity but also of writer Mario Miclat’s 65th birthday.

Aside from the awarding of the art winner, the affair saw the launching of the festschrift in honor of Miclat, “Fairground: A Literary Feast.”

Mario is the father of poet and visual artist Maningning, who passed away at the tender age of 28. The Maningning Foundation was founded in 2001 in her honor to encourage creativity among the youth.

The awarding ceremony was held at the Art Circle Gallery in Shangri-La Plaza last Sept. 4.

For the biennial Maningning Miclat Art Competition (held alternately with a poetry competition), Niño Cubacub from the Eulogio “Amang” Rodriguez Institute of Science and Technology (Earist) was named the grand prize winner for his oil and acrylic painting, “Abstract Family.”

In her citation, Cajipe-Endaya said that Cubacub’s work was very contemporary and was rendered with a fresh approach on the subject of ageing. She said that she liked the photographic rendition of the portraits that were blurred for contrast.

Cubacub received a trophy designed by sculptress Julie Lluch and cash prize of P28,000 sponsored by the Erehwon Center for the Arts.

Dalena noted that Buenavente’s painting was a “beautiful rendition of color” that you would not think that such work was perhaps just a result of luck. Meanwhile, Vinluan praised how Antimano had done the figures in his artwork in a rather disturbing manner.

Co-edited by Gémino Abad and Alma Cruz Miclat (mother of Maningning), “Fairground: A Literary Feast” is an anthology of poems, essays, monologues and stories by 40 of the best poets and writers in the country, such as National Artists for Literature F. Sionil Jose and Virgilio S. Almario.