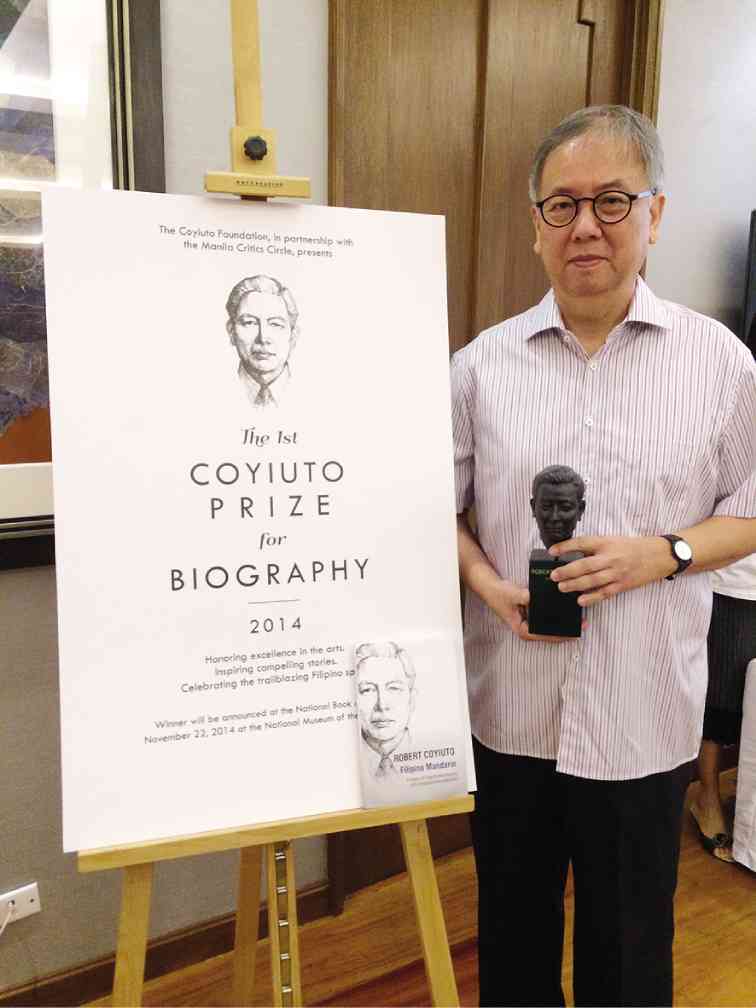 Authors of biographies and autobiographies now have a new prize to win. The Coyiuto Foundation and the Manila Critics Circle announced the establishment of the 1st Coyiuto Prize for Biography in a brief ceremony last Sept. 30 at the Coyiuto House in Makati City.

“Biographies need to be written by people, read by people, and inspire people to emulate and honor those who should not be forgotten,” said James G. Coyiuto at the launch.

He recalled reading a newspaper column by Elfren S. Cruz about the National Book Awards, which are given by the Manila Critics Circle. A conversation with Cruz’s wife, National Book Development Board chair Flor Marie Sta. Romana-Cruz, led to Coyiuto being introduced to MCC chair Dr. Isagani R. Cruz. That introduction “eventually led to this auspicious day where we are not only celebrating the 91st birth year of Robert Coyiuto Sr. but we are also launching the Coyiuto Prize for Biography,” Coyiuto explained. The biennial award boasts of a cash prize of P100,000.

The prize is being given in honor of James’ father, Robert Coyiuto Sr., the pioneering insurance magnate who founded Prudential Guarantee and Assurance, Inc., among other successful business ventures. The first Filipino to join the illustrious insurance market Lloyd’s of London, he died in 1982 at the age of 58 and was the subject of award-winning writer Charlson Ong’s 2008 biography, “Robert Coyiuto, Filipino Mandarin: A Legacy of Responsible Industry and Compassionate Enterprise.”

“Many individuals changed our history, not just individuals in positions of power, but ordinary individuals, ordinary people like you and me,” said Cruz in his remarks at the launch. “People should write about the lives of people they know or can research about. People should write about their own lives, because, as they say in the theater, there is no such thing as a small role. Everybody has a role to play in the history of our nation.”

He added: “Coyiuto himself exemplified the kind of individual that changed history.”

To be given every two years beginning 2014 for the coming decade, the Coyiuto Prize will end in 2023, the birth centennial of Robert Coyiuto Sr. Biographical or autobiographical books written in English about a Filipino individual or family written in the years of 2012 and 2013 will be automatically eligible for the inaugural 2014 prize, with the judges looking at the significance impact that person or family has had in the country. The winner will receive a cash prize of P100,000 and a bust of Robert Coyiuto Sr., sculpted by artist Rafael de Casal. Should no book win the prize in a given year, the prize money would then be added to the next award’s cash prize. Theoretically, if no winner is announced in 2014, then the 2016 prize will have a cash award of P200,000. “But we hope that we will be able to find a suitable book this year,” Cruz said.

The MCC will handle the listing for the awards. “There is no need for publishers to nominate any particular book,” Cruz said. The 2nd Coyiuto Prize will thus be given in 2016 and covers books published in the years 2014 and 2015.

The winner of the 1st Coyiuto Prize for Biography will be announced during the National Book Awards ceremony on Nov. 22 at the National Museum of the Philippines. The winner will receive the award in a separate ceremony at a later date.

“We would like to discover more great people and, more important, to remember them, to immortalize them by reading their stories in books,” concluded Cruz. “We believe that the Coyiuto Prize for Biography will inspire writers, old writers and new writers, to write biographies and autobiographies.”