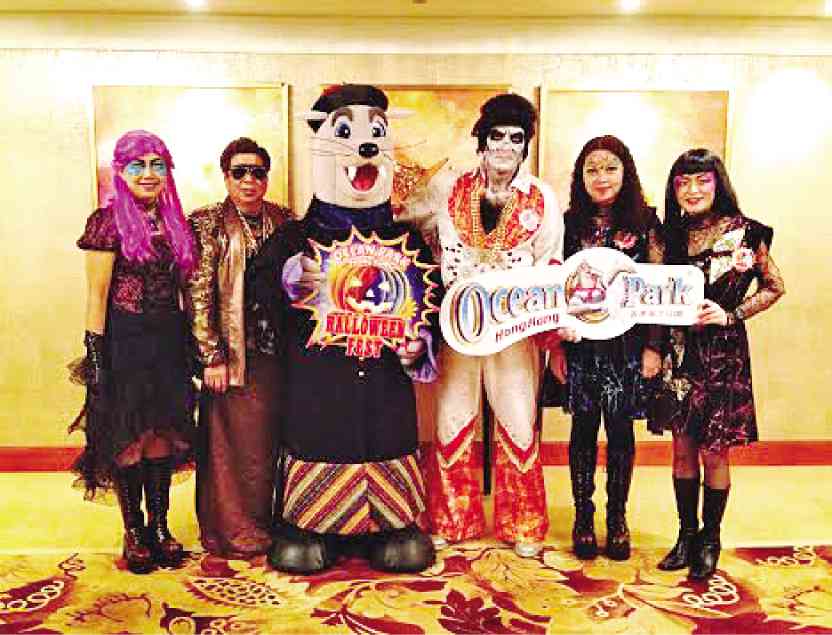 Doraemon and the scariest Halloween

You know the people at Ocean Park take fun seriously when the big bosses from Hong Kong fly to Manila with costumes and their own special effects makeup artist.

Tom was a ghoulish version of Elvis Presley; Paul a goth rock star; while the girls were made to look like Morticia Addams with bright-colored wigs and glittery eye makeup.

Paul, in a long, leathery black skirt, shook his head and quipped: “How do you ladies walk around in skirts? It’s so hard to walk around while wearing this.”

Ocean Park, listed as the 12th best amusement park in the world, considers Halloween one of its biggest events.

Paul, executive director for hotel and hospitality, says, “We started our Halloween events in 2001, and we taught the market how to enjoy Halloween. Every morning we wake up thinking, ‘How do we scare people tonight?’”

The park’s Halloween festivities kicked off mid-September and run till October. The event is so huge that an additional 600 talents—Filipinos included—are hired as part-time scarers. A master pumpkin sculptor is also among them.

“We normally have 85 ride show attractions, and on Halloween, we end up layering on about two dozen more things added on, nine different houses, attractions and shows. We’re encouraging the guests to do rides during the day and do houses by night to get into the spirit of Halloween,” says Tom, Ocean Park’s chief executive.

During the day, small kids can enjoy a more family-friendly offering, beginning with the Doraemon Halloween Party.

Ocean Park is proud of its Doraemon attraction because this is the first time that a Japanese robot cat will appear in a Halloween event.

Other haunted attractions include a movie studio where guests can have photos and videos taken with a selfie camera that can capture their scared expressions.

After 5 p.m., the kid-friendly Halloween houses take on a creepy vibe that will require extreme bravado, and in some cases, a waiver of good health.

Tom says, “We are also promoting what is probably one of the scariest offerings of a theme park, which is ‘H14.’ Guests must book ahead of time and tell us what they’re most scared of, and we basically try to tailor the experience around that—it’s a new offer for us, and we’re really excited about it.”

H14 is so scary that Paul claims he’s been to the attraction only when the lights are on, and that a male reporter who tried it was not able to continue the attraction and even cried after.

H14 is the first reservation-only haunted attraction with limited admission and restricted to people aged 16 and above.

“We give guests different choices—from bugs, worms, fear of falling, and we tailor the house according to their fears,” says Tom.

“What about you?” Paul asks us. “What scares you the most?”

Ocean Park Hong Kong’s Halloween attractions will run until Oct. 31. Visit http://halloween.oceanpark.com.hk. Visitors who fly Philippine Airlines are entitled to a discounted ticket; simply present your boarding pass with “Manila to Hong Kong” when buying a ticket at Ocean Park to get the discount. Download Ocean Park’s free app (App Store, Google Play) to be able to book attractions in advance, get more info about the attractions and navigate your way around the theme park.