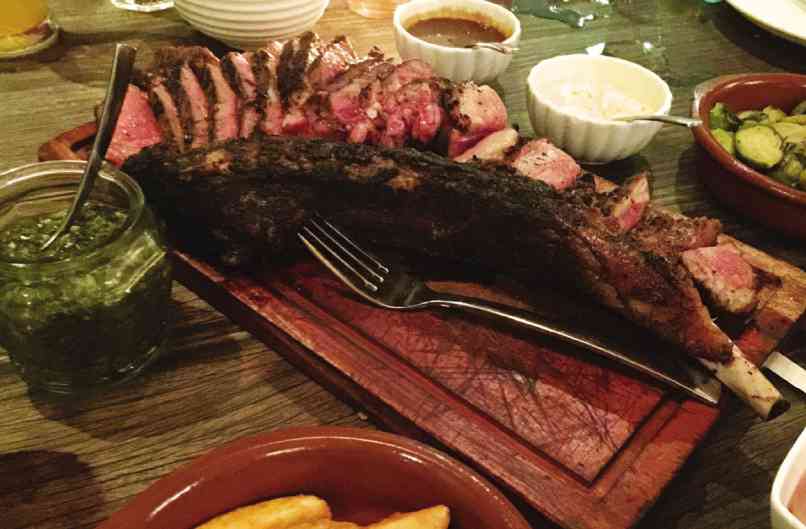 There is surely something nefarious afoot, with the recent string of good reviews from this often cantankerous reviewer. Is he on medication? Is he on the take? Is he being muzzled?

The answer to all three is no. I’ve just had a string of good luck eating out recently, although that winning streak came to a screeching halt last weekend.

This week I explored two regional cuisines I know very little about and would like to investigate in greater depth.

Earlier in the week I found myself north of Metro Manila, which is always exciting because I’m convinced that the Quezon City food scene is more exciting than Makati’s, and the rate of restaurants opening in Bonifacio Global City is finally slowing down.

I was particularly interested to check out a place that had been well-recommended but didn’t seem to be getting much press—Gaucho at Robinsons Magnolia.

The restaurant is tucked away at the back of the mall, among restaurants that looked out onto a courtyard where children were playing on the grass, and a miniature locomotive barreled down the cement pathways.

The restaurant itself has something of an eccentric design—table and chairs ranged neatly around a somewhat disturbing display of small dead pigs and half a haunch of beef strung up inside a glass case.

Gaucho is an Argentine restaurant, though not exclusively a steakhouse, as La Cabrera is. Both establishments have to endure the indignity of being compared to one another for a little while, even if they are very different, because there aren’t many Argentine restaurants in town.

I don’t think it would be insulting to La Cabrera to suggest that it is primarily a steak place, and should be considered in the same specialist’s breath as Elbert’s and Mamou; whereas Gaucho is a regional restaurant, with quite a lot on the menu.

I get nervous when restaurants open with a very extensive list of dishes, because unless the place is packed, a lot of the food will either go to waste or end up being reheated.

But almost everything we had was more than competent, from the scallop ceviche appetizer to the morcilla (less squishy, more familiar than its counterpart at La Cabrera).

The bell peppers stuffed with ground lamb was very redolent indeed, and more mutton in texture than lamb.

For the main course, the tomahawk steak which, at 1.5 kilograms (some of it bone), was more than enough meat for our table of five.

The side dishes were not as bountiful as La Cabrera’s banchan-style deluge of choice, but the ones that did come were well-thought-out and more than adequate.

There was so much else on the menu I wanted to try, including the baby pigs which emerged from their slow roast on long poles.

And now for the not so good. I had eaten at Swagat before, years ago with a vegetarian friend. I had attributed my lack of enthusiasm for the food to the lack of meat in our meal.

My friends and I had been craving Indian food for some time, and having struck off New Bombay and Queens from our list, we had high hopes for the well-reviewed Swagat.

My experiences of eating Indian food outside of the subcontinent have not been positive; even London’s subcontinental fare is better than most, but still a faded palimpsest.

But the food at Swagat really takes the cake, or the barfi. It took half an hour for our orders to be served; they were tiny portions of swill, gloop and slop, in various shades of orange and brown, all of which tasted like nothing at all.

I myself am no expert in the grinding, roasting and judicious combination of spices that make up Indian stews; but let’s take dal, which is a fairly basic dish, and which should not taste like dishwater. I can make dal, after a fashion; a mummyji would probably not approve, but it does taste like something.

We were served dish after dish of thick sauce with small slivers of meat or vegetable that were completely devoid of flavor, and which the Indian family at the table next to ours (probably hired actors in makeup) seemed to be consuming with delight.

Argentine cuisine seems something we would take to naturally, as fellow post-colonials of Spain, and I look forward to delving more into the exotic yet familiar dishes at Gaucho.

Indian food in Manila, at least in commercial restaurants, is simply a travesty. The city has a sizable community of Indian migrants, and if its cuisine could be replicated with a modicum of authenticity, I don’t see why it shouldn’t be more popular.

Still, for a country that had only a handful of fine dining restaurants about 30 years ago, I guess we’re not doing too badly.