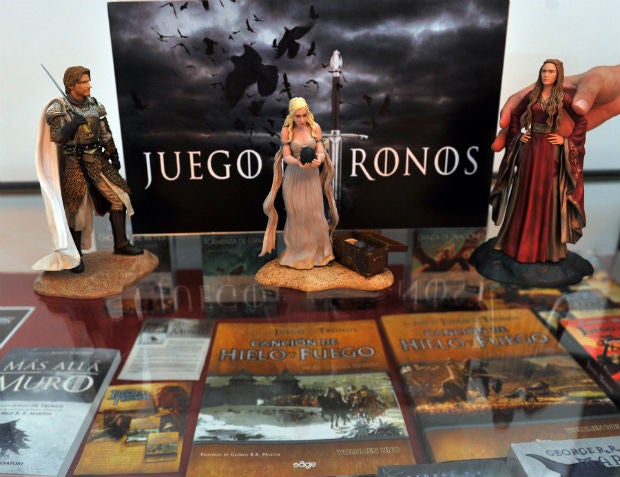 An employee arranges figurines from the series Game of Thrones on October 22, 2014 as film crews began shooting part of the fifth season of the popular US fantasy television series in the southern Spanish city of Osuna, delighting local authorities who expect a tourism boost. The tourism information center in the southern town has extended its hours since filming began on October 16 to deal with the influx and hotels are fully booked until the end of the month when filming ends. AFP

MADRID – Fans of the “Game of Thrones” fantasy TV series are flocking to the historic Spanish town of Osuna, where part of its fifth season is being filmed, fueling hopes the show will deliver a lasting tourism boost.

The tourism information center in the southern town has extended its hours since filming began on October 16 to deal with the influx and hotels are fully booked until the end of the month when filming ends.

“It’s crazy. Everyone is very excited. They want to take photos with the actors, at the locations used in filming,” the owner of the 30-room Hotel Esmeralda in Osuna, Alberto Piedra, told Agence France-Presse.

Officials hope the show will continue to spur interest in visiting Osuna, with its 16th century palazzos and steepled churches, long after the episodes filmed in the town air around the world next year.

To attract fans of the series after film crews have left, Osuna’s business association plans to offer special location tours while one restaurant will redecorate in a “Game of Thrones” theme.

The town hall is also thinking of setting up a museum dedicated to the film shoot and will update its tourism web page to highlight the sites featured in the series, Osuna mayor Rosario Andujar said.

“We want to make the most of the fact that part of the fifth season of this series was filmed here,” she told AFP.

Producers of the series plan to film in Spain for 17 days, until the 30th, mostly in Osuna, a hillside town surrounded by olive groves that is home to around 18,000 people.

Film crews moved to Osuna after shooting for a few days at the Real Alcazar palace, a masterpiece of Islamic architecture packed with columned courtyards, in Seville, about 80 kilometers (50 miles) away.

Producers have kept details of the shoot in Osuna a secret but the town’s bull ring will reportedly be used for a battle scene involving hundreds of extras.

Other cities and towns in Croatia, Malta, Northern Ireland and Iceland all reported a sharp rise in visitor numbers after serving as a backdrop for “Game of Thrones”.

The series has a dedicated fan base and is one of the most watched shows on television.

Season four of “Game of Thrones”, a tale of battles and betrayal mixed with a generous helping of sex and bloodshed, averaged 18 million weekly viewers in the United States.

The US ambassador to Spain, James Costos, a former executive at HBO, the channel which produces the series, predicts visitor numbers in Seville and the surrounding area will rise by 15 percent.

Visitor numbers to Osuna rose by 15 percent in August, and by 30 percent in September, compared to the same period last year, Andujar said.

But the mayor would not predict by how much tourism could rise over the next few years, saying only that she was sure more people would visit because of the series.

While the long-term tourism impact for the town is unknown, the shoot has already generated hundreds of much-needed short term jobs in the southern region of Andalucia, which has been especially hard hit by Spain’s economic downturn.

Producer Fresco Film services based in Malaga has hired 550 people to work as extras during the filming at a series who will be paid 50 euros ($65) per day.

Andalucia is struggling with an unemployment rate of 34.7 percent, the highest of Spain’s 17 autonomous regions.

The series has already provided a windfall for a restaurant in Osuna, Casa Curro, which introduced a special menu of tapas inspired by characters of the show.

The “Joffrey” — named after King Joffrey Baratheon, a character played in the first four seasons by Irish actor Jack Gleeson — consists of trout with bacon garnished with mulled wine.

“It has been very successful. I did not expect the menu to have so much success. People really like it,” the owner of the 17-year-old restaurant, Teresa Jimenez, told AFP.