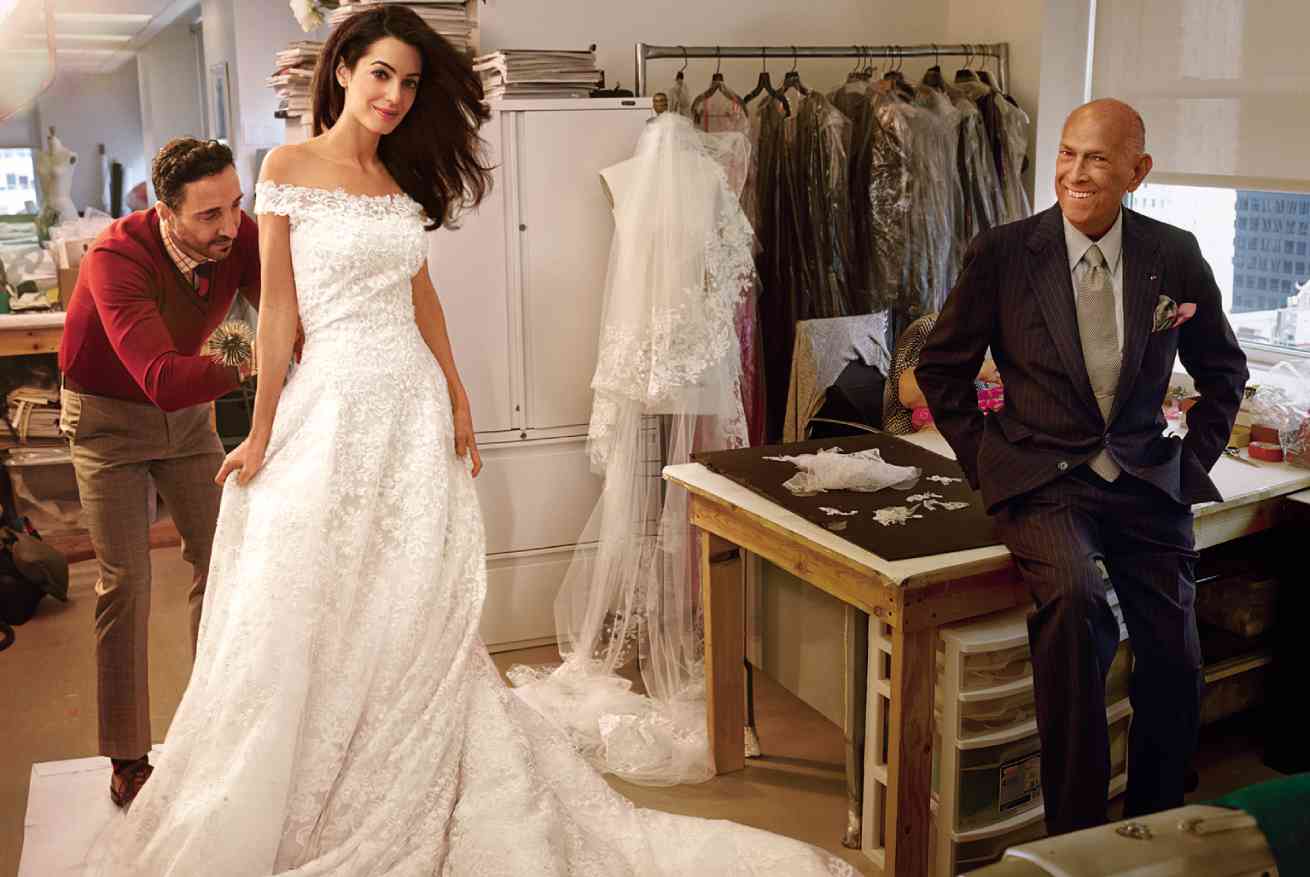 VOGUE captures what would beOscar de la Renta’s last public moment—Amal Alamuddin fitting the gown she would wear to her wedding to George Clooney, designed by a beaming De la Renta.

Oscar de la Renta’s passing on Oct. 20 marks the end of an era.

Dubbed the “Guru of Glamour,” De la Renta died at age 82 after a protracted bout with cancer.

An outpouring of tributes and messages has filled online media and social networks.

A British publication noted that although De la Renta’s name has been identified with the upper class in the United States, “unlike American contemporaries like Bill Blass and Anne Klein, he has remained a worldwide household name, with his high-profile red carpet work speaking of a deep and very contemporary understanding of the power of celebrity.”

And yet, also unlike today’s young designers who willingly tap into the Internet and collaborate with specialty stores and commercial brands in a bid to reach a wider market, De la Renta was content to deal with the perfumed set who likewise kept to themselves.

In 1969, he became a US citizen and was the first American to become the top designer at Balmain, the French fashion house. He headed Balmain for 10 years before designing for his own label.

At the time, there were very few designers who ventured on their own. Instead they designed for department stores like Neiman Marcus and Bloomingdale’s.

De la Renta’s decision paid off as he soon caught the eye of fashion icon Audrey Hepburn. He went on to dress four American first ladies, from Jacqueline Kennedy to Hillary Clinton.

His final fashion statement was doing the fairytale wedding gown of Amal Alamuddin when she wed actor George Clooney last month. The ivory-beaded tulle dress with Chantilly lace appliqué was one of the most photographed wedding gowns in recent years. It is also featured in this month’s issue of US Vogue, a casting coup orchestrated by the magazine’s editor in chief Anna Wintour.

“George and I wanted a wedding that was romantic and elegant, and I can’t imagine anyone more able than Oscar to capture this mood in a dress. Meeting him made the design process all the more magical, as he is so warm and such a gentleman,” said Alamuddin, a British-Lebanese human rights lawyer, in a behind-the-scenes account by Vogue social editor Chloe Malle.

Another British publication quoted Naomi Campbell—whom De la Renta hired early in her career—describing him as a “gentleman of fashion.”

“Designer Marc Jacobs tweeted that the ‘fashion icon’ would be missed.

“Diane von Furstenberg added: ‘Oscar de la Renta was a wonderful designer, a true Renaissance man. His voice will continue to sing in our hearts.”

“It was my idea. He would never in a million years have done it, he’s far too modest,” Parker was quoted as saying.

De la Renta was the recipient of the American fashion industry’s Coty Award in 1967 and 1968.

In 1990, he was given a lifetime achievement award by the Council of Fashion Designers of America (CFDA).

In 2000, he received the Gold Medal of Bellas Artes from the king of Spain.

He served two terms as president of the CFDA, chaired the Queen Sofia Spanish Institute in New York, and was on the boards of Carnegie Hall and the Metropolitan Opera.