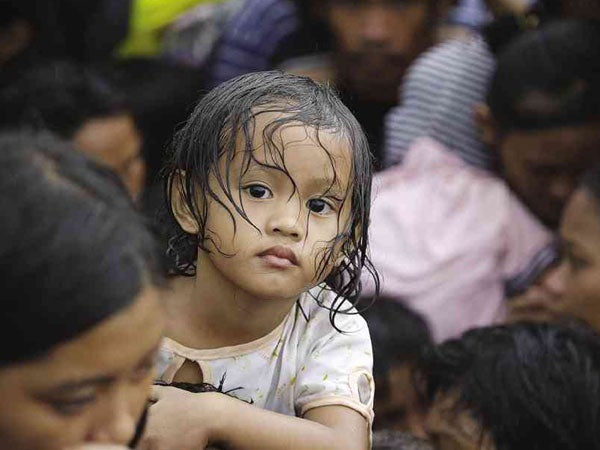 A child waits in the rain with fellow typhoon survivors as they line up in hopes of boarding a C-130 plane in Tacloban City. AP FILE PHOTO

MANILA, Philippines – The nutrition of children is a key factor to make the Philippines more resilient to disasters, such as supertyphoon “Yolanda” (international name Haiyan) which struck the country nearly a year ago, an international children’s rights group said Friday.

“It’s clear that children who are well-nourished are more resilient in natural disasters. The relationship between natural disasters, nutrition, and child mortality, they are very closely related,” Ned Olney, country director of Save the Children Philippines said in an interview.

“If you want to have a resilient population you have to look at nutrition,” he said.

Hundreds of school children in Metro Manila participated in a fun run in the Quezon City Memorial Circle early Friday to join the global Save the Children “Race for Survival” relay race.

Race for Survival has been held simultaneously in around 30 countries for five years in a row to call on governments worldwide to put for more focus and action on child malnutrition.

Save the Children cited the 2013 National Nutrition Survey (NNS) which revealed that nearly one third, or 30.3 percent, of Filipino children 5 years old and below are malnourished.

The survey also showed that there has been very little progress in reducing malnutrition over the past years, with rates at around 33 percent since 2008, Save the Children said.

“Every child should have access to nutritious food and health services. Healthy children will grow up to be productive citizens of this country. With Race for Survival, we are highlighting the need for every child to be within reach of the quality care they deserve,” Olney said.

The survey further found that in Luzon, malnutrition among children remains high due to lack of access to basic health and nutrition services. The risk is even higher during crises and emergencies such as typhoons and conflict situations, it said.

In the Visayas, “Yolanda”-ravaged Western and Eastern Visayas are among the regions with high prevalence of underweight children.

In focus group discussions with children, Olney said that even they were aware of the things that they need such as adequate water, sanitation, and hygiene in all public schools and the need to have nutritious food served in schools as well as the immediate surroundings.