‘It’s about getting to the finals’ | Inquirer Lifestyle ❮ ❯ 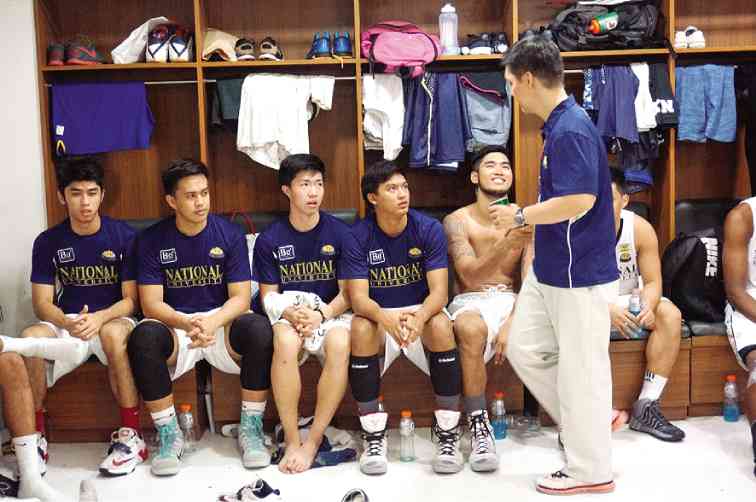 COACH Altamirano giving words of wisdom to graduating Glenn Khobuntin on how winning the championship will not change his life. Instead, God will do it for him. RUTH L. NAVARRA

‘It’s about getting to the finals’

The discussion goes as far back as 1954 when the school won the title for the first time. Talk also includes the past decade when players and cheerdancers had to be careful not to fall during practice—for fear of getting splinters from the rotting wooden floors of their basketball court.

The champions also remember their painful losses last year, especially from the hands of the UST Growling Tigers.

It was an experience that made them stronger and hungrier.

At the center of this determined team is coach Eric Altamirano. After leading his wards to beat the UE Red Warriors in a knockout match for a Final Four slot, he went straight to the white board. Without saying a word he wrote “2.”

The Bulldogs knew that it meant they had to beat the Ateneo Blue Eagles twice.

It would seem that the Blue Eagles were an easy assignment, given that Ateneo has not beaten NU during the elimination round.

But it was a test of mental toughness.

“There was a time when they stepped on the floor to play against Ateneo, they would immediately feel inferior. They would be rattled even with the crowd. It was not easy but we had to go through a process,” said Altamirano. “We tried to change that, so when they got on the floor [they would feel that] they could win.”

After securing their ticket to the finals at the expense of the Blue Eagles, Altamirano told his boys that it is “not about beating Ateneo twice. It is about getting to the finals.” He also told them about the Biblical passage he read that morning, about breaking the Wall of Jericho to get to the Promised Land.

It might come off as weird to describe the dugout of NU during half times and postgames as very calm. But that was exactly what it was.

During half times, the coaches and team managers, including Hans and Manny Sy, had a moment to themselves to discuss the ongoing game.

All the coaches contributed by pointing out the team’s strengths and weaknesses.

Altamirano then relayed to his players what was discussed. “This is our weakness. How do we deal with this?” he always asked them.

The coach never prematurely congratulated his team for a job well done on the first half. Mostly, half times were used to keep the emotions of the players in check. Emotions were regarded as a waste of energy. Too much happiness, anger and frustration could affect their performance in the game.

Huddles always ended with a prayer, with players’ knees bent, their hands and heads on the floor. Most of the time, the best player of the game would lead this solemn rite.

Anyone watching this would feel that leading the team in prayer was an honor and a reward for a job well done.

After beating the FEU Tamaraws in Game 3 of the championship, Altamirano reminded his boys to keep and treasure the championship shirts they wore. He still keeps his from ’86.

Suddenly, somebody threw water in his direction and the players began cheering. Everyone within range started running out of the room.

As soon as things settled, Altamirano gathered his graduating boys around him. With his hand on the shoulder of Glenn Khobuntin (who was still wearing a basketball net around his neck), the coach simply said, “Winning a championship will not change your life. Believe me, I’ve experienced that. It is God who has the power to change it.”