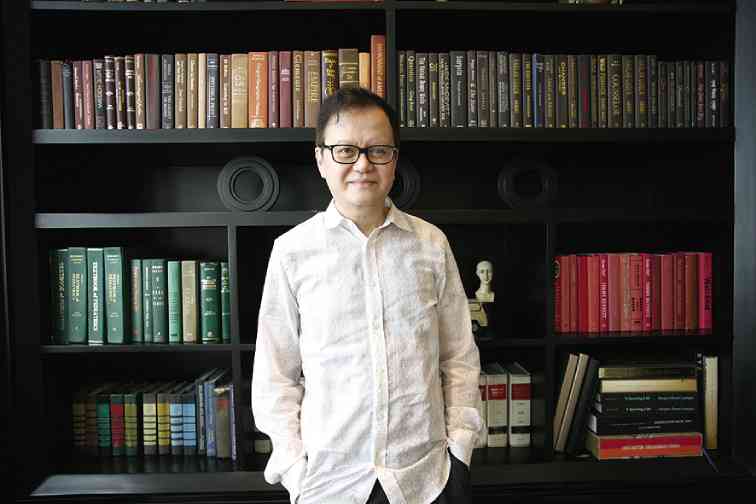 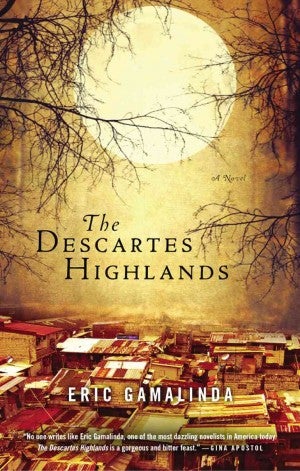 Like a literary shade, Eric Gamalinda seems to be shifting from form to form effortlessly: poet, playwright, journalist, teacher, short-story writer and novelist. But like many stories, there is more to it than just mere trickery. Truth is, Gamalinda is all these things at once, and the transformation is a permanent state.

That is reflected in the variety of Gamalinda’s books, three poetry collections, two books of short fiction and five novels, including his new novel, “The Descartes Highlands” from New York-based Akashic Books.

That state is also reflected in the range of Gamalinda’s awards, so voluminous they almost blur into a single wave of recognition: Palanca, Philippine Centennial, National Book Award, Asian American Literary, Asiaweek Short Story, among many others, various grants; most recently, the original manuscript for “The Descartes Highlands” was shortlisted for the 2009 Man Asian Literary Prize.

The 58-year-old Gamalinda was in Manila to launch “Descartes” at the first Philippine Literary Festival. Fittingly enough, the final book has changed quite a lot since it was shortlisted for the Man Asian.

Gamalinda explains that he began thinking about “Descartes” shortly after his Centennial Literary Award-winning novel “My Sad Republic” in 2000 and 9/11 happened. “I felt that it seemed like America was imploding. There was so much paranoia, so much xenophobia, and I felt I was one of the targets because I was foreign,” he tells the Inquirer. “At the same time I wanted to convey that feeling of alienation. Even though people were supposed to be more connected, I felt that people were more isolated in their loneliness, and it’s harder for people to have real human relationships.”

He found a story about a group of men who made babies just to sell them, and other stories like the one about the bombing of an abortion clinic. “It just all congealed together,” he says.

It would take him a decade to finish the novel, writing on and off, suffering several false starts and chucking failed versions. “It’s a very complicated story,” he admits. “It’s unavoidable, because these are three stories heavy with back story. Even the back story has a back story.”

Much of “Descartes” is set in the Philippines just as martial law is declared. “I was interested in karmic consequences, and even today I think I still haven’t fully figured out what happened to us during martial law. I think we were permanently damaged by it, and I have to keep writing about it. So I wanted the story to begin there,” he says.

“Descartes” tells the story of two half-Filipino men—Mathieu in France and Jordan in New York—who realize they might have been sold as infants by their long-missing father. The book is told from the point of view of the two brothers and their father, Andy, jumping between different points in time and place.

Once the narratives settle in, “Descartes” rushes forward as mysteries of identity and circumstance are unraveled. You won’t want it to end.

Burnished in Gamalinda’s poetic paragraphs and dramatic endings, “Descartes” is also Gamalinda’s most accessible work yet.

“I wanted it to be,” he says brightly. “I want my books to be read. I always felt that my writing was accessible. It was easy to get into my work even if it was experimental. I want my work to be welcoming to the reader. I don’t want to scare the reader away. That can happen later in the book, when I start dropping the bombs. The writing itself is painful but the reading shouldn’t be.”

The time he spent writing the book also reflected a time of metamorphosis for Gamalinda: “I was going through a lot of changes not just because of what was happening around me but also because I was starting to reevaluate my own writing. I was especially interested in the way I used language. My writing was getting more conversational, simpler. Back in the Philippines, we love playing with words, and I stopped doing that. I felt I needed to use language in a more utilitarian way without sacrificing the art or the poetry, but be more direct, be more circumspect.”

He was looking at different forms of media. “I was getting older and I could feel it physically. I started wondering, how much time do I have and what can I do with that time?” he says. “It was probably a midlife crisis!”

His well-attended book-signing at Raffles Makati also reflected just how rare he comes back. He hasn’t been able to come back more often because it’s expensive and the trip’s grueling. This is only his fourth trip back. “I wanted to come back here when I had something to share with people. I came back here to see my mom (Doris Trinidad, who is now 86), who’s getting very old, so the first three times I came here I just wanted to be with her and look at a lot of family pictures. But I also felt that at some point, I wanted to meet everybody again, but only if I had something to offer them, and I thought the book would be a good thing.”

But when he’s back here, he looks forward to the food. “Oh my God, anything native like adobo and bibingka,” he says. He had shifted to a more vegetarian diet and hadn’t had meat in a while, but he’s eating whatever he wants while he’s here.

He’s impressed by the festival. “It’s huge and amazing,” he says. “It’s worth it, coming here.” He’s also stunned by the youth of the readers he’s seen. “There are so many amazing young writers,” he adds.

The festival also saw the release of two revised versions of his novels “Confessions of a Volcano” and “Empire of Memory.” His books are available at National Book Store.

Back in New York, Gamalinda works two jobs: He teaches ethnicity and race at Columbia University and raises funds for the Clemente Soto Velez Cultural and Education Center, which promotes the arts. This leaves little time for his work, and when he’s not writing, he likes walking a lot, tries to go to the gym to stay fit, and, once in a while, he bikes around as far as he can. New York always has something new to offer, and that prevents you from being cynical, he says.

He’s already warned his boss he’s going to disappear for a while to work on his next book. “I can’t tell you much about it yet. The only thing I know for sure is that it’s probably going to be my immigrant novel. I think I’m ready for that after 20 years. I’ve been holding back. I want to address a bunch of issues within the US that affects immigrants. I want to address racism but I want the book to be nothing like what’s ever been written about that topic. I also know that the main character, which took me a long time to figure out, is suffering from a very strange affliction. After living in the US for 20, he has never been able to adjust to the new time zone. He is virtually a vampire. He lives by night. He lives in Philippine time, all the time. That means that the novel will be very dark, literally, a lot of things will be happening after dark and he’s going to be involved in a situation that will overwhelm his entire perception of life in the US,” he says, and then pauses. “I’ve already told you too much!”

It should come as no surprise that he is a dual citizen, straddling two cultures. Interestingly enough, Gamalinda was not allowed to be a dual citizen when he first earned American citizenship in 2002. Then the laws changed, and so Gamalinda essentially became a Filipino again, with the pledge of allegiance and everything. He actually got to vote in the 2010 elections.

Bursting with all kinds of ideas, Gamalinda has never been afraid to blur the lines, peppering the new novel with real events and mixing the visual with the written in past projects. “The Descartes Highlands” is a perfect sublimation of what Eric Gamalinda represents as a being for whom change is natural. “I don’t feel I’m shifting at all. I don’t even feel that I’m moving from one to the other. I just feel that it’s just what I do and I’ve never thought, ‘now I’m going to move to poetry.’ I just do it and I think it’s all just part of what I am.”