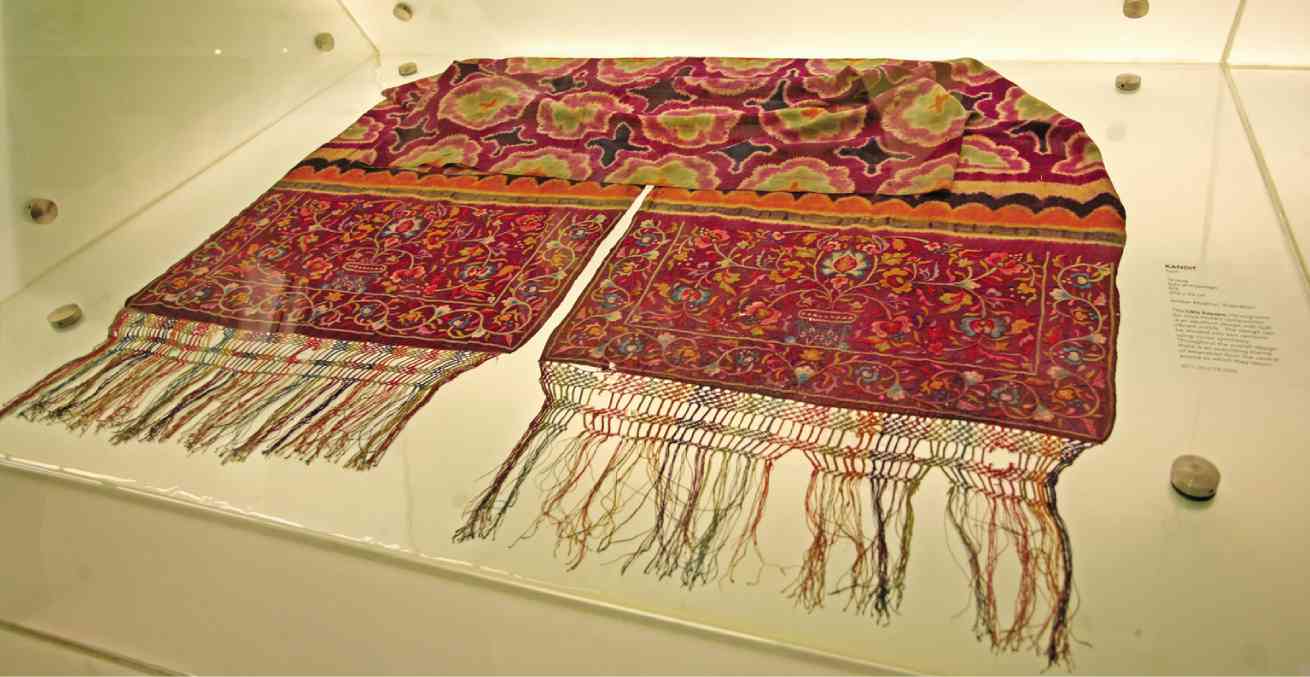 ANALYSTS note that a kandit sash created by the Tausug from the Sulu archipelago exhibits the same graceful geometric forms found in the fabric of other tribes overseas. PHOTOS BY KIMBERLY DELA CRUZ

Evelinda Otong Hamja is a 40-something weaver from the Yakan tribe who, when she was just 9 years old, learned to create beautiful headscarves called seputangan from her grandmother.

Back then, it was important for Grandma that Evelinda learned the intricate skill of mingling warp (the vertical thread of the loom) and weft (the horizontal thread that goes over the warp).

It was only much later when Evelinda realized that the introduction, placement or spacing of specific colors in the fabric led to certain shapes or images.

Evelinda stretched out her right leg to show some of the designs she learned woven into her trousers.

But while the designs her grandmother taught her existed in nature, Evelinda pointed out that the tribe had no known reference for the inalaman.

In fact, it took a while before she learned that it was called a diamond.

“We wove the diamond design into our fabric but the elders did not have a name for it,” she said.

The pattern was actually more difficult to execute in cloth because “there is no existing pattern. There is no diamond shape in the mountains of Basilan. It only exists in our memory. Basta tinuro lang sa akin, hindi ko nakita ang diamond in nature, not even when the tribe moved to the (Zamboanga peninsula) because of the armed conflict,” Evelinda said.

Evelinda’s masterpieces as well as those created by other tribes all over the country, are now on display at the “Art and the Order of Nature in Indigenous Philippine Textiles” at the fourth floor galleries of the Ayala Museum in Makati City.

The 111 textiles donated to the museum by Mercedes Zobel were studied and analyzed by students of the London-based Prince’s School of Traditional Arts (PSTA), one of the core charities of Prince Charles; it was founded in 2004.

The students noted that designs found in indigenous Philippine textiles “reflect the universal order of nature.”

Now, the rest of this story should be told in the simplest way possible. Otherwise, it would lose its mind-blowing quality.

The thing is, Evelinda and all other weavers from tribes that include the Kalinga, Gaddang, Itneg and Kankanay of Luzon down to the Maranao, Subanun, Tausug, Bagobo, B’laan and T’boli in Mindanao were using the same geometric shapes and designs over and over, obviously without being aware of each other’s business.

Araneta said previous studies have already established that the square, triangle and circle shapes have long existed in textile designs and appear to be universal symbols of the earth, humanity and the heavens, respectively.

Araneta said there are also observations that the designs would be repeated as a rhythmic pattern in a fabric, or hidden in other designs and only recognized upon close inspection, or superimposed on other patterns to create new ones.

She mentioned a Tausug headscarf whose tapestry “looks like a mandala,” a pattern that has significant spiritual meaning in some Eastern philosophies.

The lukis kayapo or lotus flower in a Tausug kandit or sash would have the same graceful, flowing pattern found in a Maranao woman’s malong.

Circular patterns found in the upper garments of the Luzon highlanders would be repeated as hexagons or circles arranged like flower petals that emanate from the same radius in the designs of the southerners.

Across the seas, the hexagon is reinvented as a pattern for a snowflake, honeycomb or lily flower.

Araneta talked of an “inspirational/spiritual” realm, a seemingly psychic connection, in explaining how tribes all over the world created the same patterns in their fabric way before man discovered ocean navigation and practiced global trade.

Weavers of one group would observe nature and see circles, triangles and squares and document these in their fabric that, at one point, was most likely considered currency and an indication of wealth and status.

To paraphrase a text found in the exhibit: textiles tell stories of people’s aspirations.

Woven cloth carries the cultural life of a community and could even serve very personal purposes similar to talismans and amulets like ward off evil, attract good fortune or assure an abundant harvest.

Textile designs are also visual representations of an indigenous group’s ideals of beauty and order, as well as belief systems.

Araneta said that since the textiles also mirror a people’s intimate relationship with the natural environment, it is imperative to preserve the habitat if the tradition of cloth making is also to be preserved.

Otherwise, these people would not have patterns, aspirations and stories to document in their fabric.

In a press conference prior to an exhibit preview given to journalists, Zobel said she was “floored” when she first saw the textiles as a collection gathered and later offered to her by friend Ricky Baylosis, an antique dealer.

Zobel eventually purchased the Baylosis collection and donated it to Ayala Museum.

Kenneth Esguerra, Ayala Museum senior curator and head of conservation, said the collection should be studied and appreciated “in relation to universal design.”

Asif Ahmad, ambassador of the British Embassy to Manila, agreed that fabrics tell stories, to the point that they could influence global affairs.

The British embassy participated in the opening night festivities on Thursday in celebration of Philippine-British Friendship Week.

“And the time has come for the Philippines to (use textiles) to transition from replication to creation. To sell to the world and influence (the rest of) us,” the envoy added.