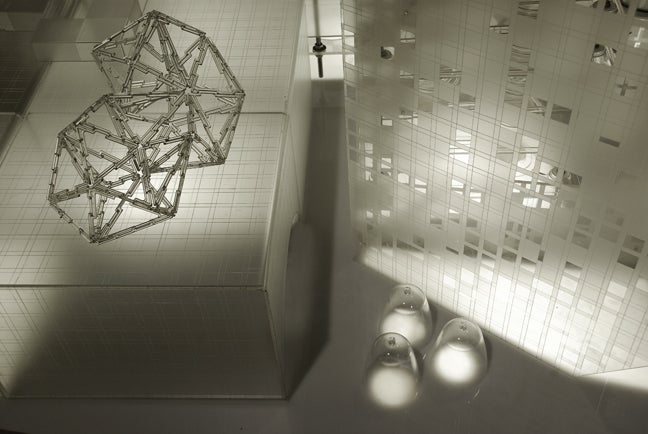 MANILA, Philippines—Transforming spaces and perceptions through memory are at the heart of Anton del Castillo’s “A Child’s Memory” and Eric Zamuco’s “Another Other”.

Drawing inspiration from their experiences as fathers and husbands, the two artists create and construct retrospective worlds of movement and change.

In “A Child’s Memory,” del Castillo presents us with an intensified reminiscence of childhood: a well-enjoyed game of jackstones, each piece easily captured in one’s hand, becomes a monument to an object whose meaning and use is fading.

The travels of a family are visually archived in detail and retrospect in Zamuco’s “Another Other”. Each object represents a specific time-space, a moment in a family’s life, living abroad and moving from place to place.

It is also a speculation of what has come to pass and what will happen next: a documentation of memory, domesticity, travel and anticipation.

The works from the two shows employ materials that can be found used in the building of homes: metal, concrete blocks, wood, screws, varnish to protect surfaces with—things that represent the cohesion and strength that the father’s authority brings to the household.

Yet, it is belied by a certain kind of tenderness that passes by undetected at first glance: a child’s toy embedded in concrete and an article from the wife (proof of the desire to hold on to something that will eventually disappear or disintegrate), and the lines and scratches on the metal surface of a jackstone sculpture (a testament of another kind of “labor of love”).

Form and narrative meet in “A Child’s Memory” and “Another Other,” bodies of work that provide a different angle and insight on the cause of gender equality and roles.

They can also be seen as a call to re-evaluate our sense of sex, that perhaps in seeking to prove that one is better than the other, rather than seek for balance, to meet each other half way, we are merely replicating the biases that we wished to do away with in the first place.

In this respect, the works go beyond mere recollection and revisit but also a re-evaluation of each person’s presence in other people’s life.

Anton del Castillo’s “A Child’s Memory” and Eric Zamuco’s “Another Other” open on November 12, 2014. Museum hours are Monday to Friday from 8 am to 7:30 pm; Saturday 8 am to 6pm; closed Sundays and Holidays. For more information, please contact Ria Aguilar at 4266488 or via email at [email protected]