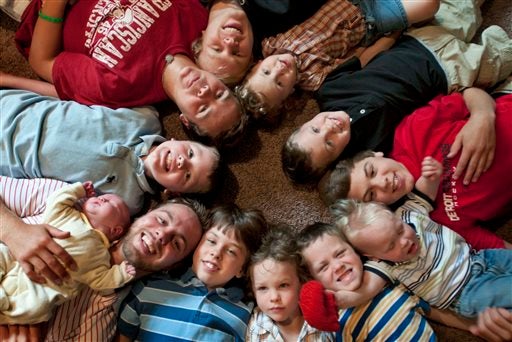 ROCKFORD, Michigan—A western Michigan couple with 12 sons is expecting baby No. 13, and even though they’re sticking to their tradition of not finding out in advance whether they’re having a boy or girl, they said they’d be shocked if their streak is broken.

Jay and Kateri Schwandt’s baby is due May 9, The Grand Rapids Press reported. Even though they expect it will be another boy, the couple said they would welcome either into the family.

“If we were to have a girl, I think we would go into shock,” Kateri Schwandt said. “It would probably be disbelief.”

If he had a choice, Jay Schwandt said he would love to have a girl, but they’re just “hoping for a healthy baby.” Still, he would like to see the effect of adding a girl to the mix in a household with 12 boys.

“I’ve experienced all the boy stuff,” he said. “As long as we are having all these children, it would be really neat to experience the other side.”

The couple welcomed their twelfth son, Tucker, to the world on August 4, 2013. Their oldest son is now 22 years old.

“The stuff that goes on in this house is all-boy — roughhousing and wrestling,” Jay Schwandt said. “If there was a little girl in there, I assume it would be different.”

Kateri Schwandt, after being the sole female in the family for more than two decades, said she would lean toward having one more boy.

“A little girl would be neat to have in the house, but a little boy kind of takes the pressure off,” she said. “We know what we are doing. Why change things up?”

The Schwandts, who live Rockford, which is north of Grand Rapids, consider themselves devout Roman Catholics and don’t believe in using birth control. Kateri Schwandt comes from a family of 14 kids. She said she is feeling well.