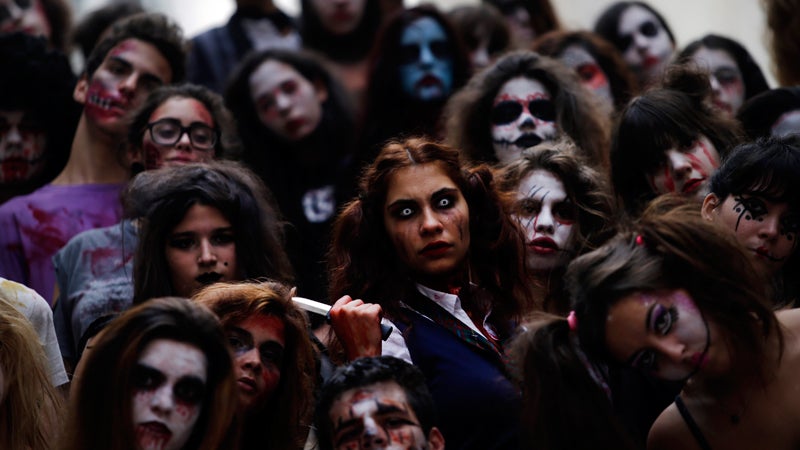 Zombies take over London for Halloween

LONDON—In a dark alley in northwest London, a small group of people desperately searched for water. But it was too late— the zombies spotted them, and they ran for their lives.

After a blood-pumping chase through a deserted industrial area, they managed to shake off the howling horde dressed in tattered clothes, and paused to catch their breath at a bus stop.

Laughing and sweating, the survivors congratulated themselves on a game well played.

It was Halloween, and this was a “street game” that allows horror-seekers to play out their favourite apocalyptic scenes from the movies.

The event in London was inspired by Danny Boyle’s zombie film “28 Days Later”, which is set in the British capital after a deadly virus sweeps across the country.

The action takes place as night falls, on quiet streets in a futuristic London dystopia where a corrupt elite has taken control of the city’s remaining food and water.

“Our players are members of a resistance that is breaking into that city to steal water,” said James Wheale of Slingshot, the games company behind the “2.8 Hours Later” event.

On the mission, the players encounter dozens of zombies on street corners and in empty buildings, dressed in rags, their faces pale and covered with blood.

The living dead have spent hours being made up and learned their howls and staggers during intensive training.

“We’re looking for people who can chase someone, scare them, good vocalisation, lots of noises, lots of good movements,” said their teacher Alex Noble, or the “Zombiboss”.

Being a zombie is “quite empowering, when you get the make-up on you, it’s like a mask and it allows you to go a bit crazy for a few hours”, said the 27-year-old former soldier.

‘Stronger than the movies’

To play the game, a group of four players was given a basic map to help guide them to the water and they advanced slowly and carefully, alert to the smallest movements.

They reached a parking lot where an informant was to give them more detailed directions, but then some zombies blocked their path.

They reacted strategically, three of them shouting to distract the monsters while the fourth got to the informant. Information in hand, they all ran off, pursued by zombies.

“It was really good. It was not like anything I’ve done before,” said Melissa Hartley, 20, after two hours of hide-and-seek and cat and mouse chases around the game’s site.

“We never knew what to expect, where the zombies were going to be. It depends on your actions,” she said, adding that the experience was “definitely stronger than the movies”.

Hartley made it to the exit, but others were not so lucky and got caught by the zombies.

“I got infected because I slipped and then they just jumped on over me,” said Omar Raza, 29.

Such street games are becoming increasingly popular, cashing in on the current fashion for zombie movies, games and books—and giving players an exhilarating experience.

“Being able to take over a public part of the city and for people to run wild in the streets as if they were children again is incredibly liberating,” said Wheale.

They put on their palazzos, drank their zombies and hustled the night away