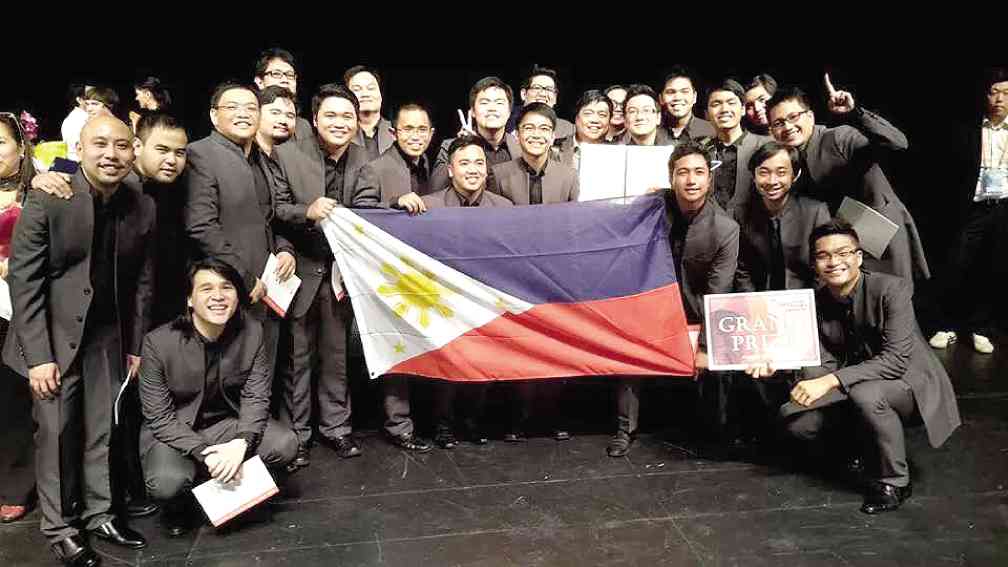 The all-male Aleron Choir from the Philippines received the Grand Prize in the 10th Busan International Choral Festival and Competition in South Korea recently.

Aleron won over 38 other choirs from eight countries, including the Czech Republic, Russia and Colombia.

It won the gold prize in the Classical Equal Voices category.

“It takes a lot of diligence and insight from both the conductor and the choristers,” he explained. “It all boils down to finding that meaning in the material and to be able to transfer it through sound that makes a winning performance, whether in a competition or a concert setting.

“The preparations are rigorous, from training the voice to balancing each section, arriving at an interpretation that each one can own with sincerity, to nurturing their psyche and sustaining their faith in themselves and one another through camaraderie and fellowship. The work never ends until you get the ideal sound.”

Last year, Aleron received the top prize in the Vocal Ensemble category in the 1st Andrea O. Veneracion International Choral Festival at the Cultural Center of the Philippines.

Arceo said it was difficult to find out who the Philippines’ closest competitor was in Busan. “I wasn’t able to hear all the choirs due to the rigorous competition schedule,” he said. “But I was very impressed with the Kyungju Children’s Choir from Korea, which also qualified for the Grand Prize after winning the Youth Choir category. They sounded flawless and disciplined.

“I am fortunate to have highly intelligent people in this ensemble. Their curiosity is simply insatiable. Though most of them are amateurs, their fascination with theory, style, pedagogy and literature is mind-boggling. I have several music majors, some language teachers, businessmen, artists, and even premed students. All of them are excellent in their own fields.”

The jury included Mark Anthony A. Carpio, choirmaster of the Madrigal Singers.

The Ateneo Chamber Singers (ACS) was declared champion of the Musica Sacra category, and earned the gold medal in the Mixed Chamber category at the 8th World Choir Games in Riga, Latvia.

The festival attracted approximately 27,000 participants from 400 choirs from 73 countries.

ACS conductor Jonathan Velasco said Filipinos choirs, despite winning awards abroad, had generally been ignored by Filipinos and their government.

“We were winning gold in music Olympics starting in the early ’80s but, sad to say, it is the boxers and beauty queens who get Malacañang’s attention,” said Velasco, an alumnus of the Madrigals.