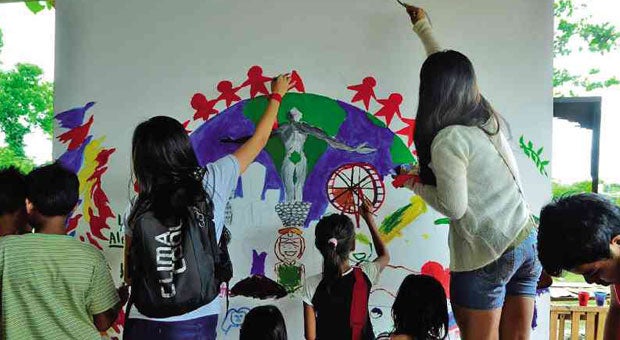 Hues of hope for children of ‘Bayan ni Juan’

They may not have been born with physical disabilities, but “I used to ask myself the same question: What does the future have in store for me?” said the 38-year-old paraplegic from Sta. Cruz town, also in Laguna.

“I told them if not for the arts, I wouldn’t have gone to many places that I’ve been to today,” he said.

With his right foot holding the brush, the artist demonstrated his unique talent with watercolor and a piece of paper.

The children were thrilled at seeing how one man, who learned painting when he was 7 years old, makes use of his good foot. They belong to hundreds of families who were relocated from Manila’s slum communities to a government housing project in Calauan.

Benavente, who also contributes photos to the Inquirer, has been doing a photo documentary of the place for the last two years. “Since I frequently visit the site, I’ve seen a lot of groups or companies conduct medical missions or relief distribution,” he said.

“People are already getting used to (this kind of aid). I thought, why don’t we elevate the way we extend help?” he asked.

One time, while on a photo shoot after Typhoon “Glenda” struck in July, Benavente found himself in a basketball court ruined by the storm. He picked up a piece of charcoal and just started doodling on the floor.

“There were these boys who constantly followed me around and asked me what I was doing,” he recalled. “They, too, started doodling. Actually, one of the mothers had reprimanded us because she said we dirtied the floor.”

That moment inspired Benavente to rally his friends, mostly artists and photographers, to put together Guhit ng Pag-asa. Through individual pledges, he was able to solicit enough money for food and art materials for about 500 children.

On five plywood panels (each measuring 8 by 8 feet), volunteers from the Laguna-based Guhit Pinas, Sarilikha, University of the Philippines Los Baños (UPLB) Painters and UPLB Kalasag and journalism students from Laguna State Polytechnic University outlined the drawings symbolizing the theme of hope.

The children were given paintbrushes to fill in the drawings. Some dipped their hands in paint and left prints on a panel, while others were into face painting, balloon twisting and street painting.

After lunch, the children lined up for ice cream and cotton candy. A dance troupe called Tiklad from San Pablo City, with an advocacy against child bullying, performed for the crowd.

“Everyone was so happy because they felt that other people still cared for them,” said Susan Pullarca, a volunteer social worker at Bayan ni Juan.

“It’s just that the children got too excited to paint that (the murals) ended up looking like graffiti.”

The murals would be used as walls for the community chapel inside the relocation site, she said.

Most of the relocated families lost their houses in Manila to Tropical Storm “Ondoy” in 2009. Although they were provided new houses, Benavente said lack of jobs, prostitution and crimes had remained a problem, making the children vulnerable.

“By seeing (artists, performers and photographers), the children might be able to have models that they might want to be like someday,” he said. “But right now, they are in a situation like when you so much wanted to draw but didn’t have a pencil around.”

Clowns without borders: Healing with laughter