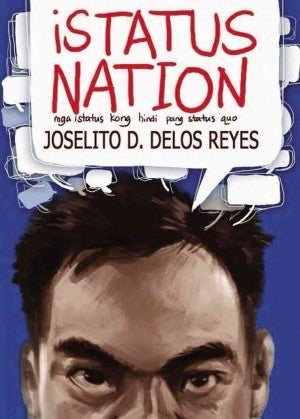 Upon first inspection, “iStatus Nation” is quirky and charming, with the upper half of Joselito de los Reyes’ face rendered as a cartoon with speech bubbles floating over his head.

Open the cover and give it a read and the humor jumps at you with arresting coherence and accuracy.

De los Reyes’ laser-sharp focus and attention to detail—on the foibles of those around him as well as his own—make for an entertaining read. The pieces grab your attention and do not let go. His musings are a laugh riot, but also sensible and true.

Take, for example, his pieces on technology. “Synthetic Friendship” and “One Strike Policy” talk about the changes Facebook has wrought when it comes to making friends. Nowadays, it doesn’t take forging an actual “connection” with another person for you to be able to call them a friend. All you need is an Internet connection and with the click of a button, you have a new friend. It has certainly made making friends easier, but most of those friend requests (FRs), as de los Reyes (receiver of 800 FRs with a waiting period of five to six months) attests to, are made with the intent of gaining something—usually an added life in a gaming app.

“Warranty” talks about his laptops, the first one from a little known brand that died after five years of use and his subsequent branded laptop that died just after its warranty expired a little over a year after it was bought. Branding and advertisement at one time or another has taken us all in. Planned obsolescence and perceived obsolescence factor into our consumerism and the idea that upgrading our gadgets and getting branded, more expensive, goods is the way to go.

De los Reyes’ piece indirectly points out that believing such fodder is a mistake. The death of his expensive, branded laptop has left De los Reyes saving up for another—this next one, for a fraction of his last one’s cost.

Here is a writer who knows his stuff, whose unbridled opinion is laid out in a funny anecdotal way. The statuses are personal, idiosyncratic even, but the stories and observations are also so unequivocally Pinoy that you’d be hard pressed not to relate. Who hasn’t had someone hate on them? Who hasn’t had their heart broken, or had someone they loved betray them? Who hasn’t been involved in a fight?

De los Reyes tackles issues with wit and aplomb that serve as a balm to ease the hurt of misfortune. Life comes with turbulence. It’s an irrevocable fact. Humor gets us through the day.

De los Reyes’ candor is commendable. He doesn’t pull any punches. Case in point his Dear Janet post, a piece lambasting Napoles and her cohorts, which has gone viral in record time—a feat in this day and age where we, the people, respond to images more than words and are said to have the attention span of gnats. De los Reyes’ piece however transcends such barriers because it reflects the emotions of millions of Filipinos. No wonder it resonates with his readers. His post, 32 percent certainly echoes the sentiment of every single tax-paying worker in the Philippines today.

His pieces speak of our culture, the folly of hubris, social inequality, injustice, the prevalence of crime, the absurdity of Philippine politics and much more. You as the reader will barely notice the weightiness of some of the topics because he writes with such a light hand.

The pieces lend themselves well to contemplation afterwards. That’s the mark of good writing. The after-effect. This book will make you nod in agreement, laugh, snort, giggle and roll your eyes in exasperation. It will also change you. Long after you’ve put down this book, you will notice how little things will jump out at you on your way to work, as you converse with friends, as you go about your life.

“A serious and good philosophical work could be written consisting entirely of jokes,” said philosopher Ludwig Wittgenstein. The pieces in De los Reyes’ book have been shaped by the medium—Facebook—but though the form may be a bit unorthodox (status posts published on Facebook and collated into a collection), the craft and crafting is no less true.

With its droll, unapologetic, tongue-in-cheek observations on humanity, the self, and the human condition that is quintessentially Filipino but also universally relevant, De los Reyes’ work iStatus Nation hits the sweet spot between popular and relevant and has certainly proven Wittgenstein’s words as truth.