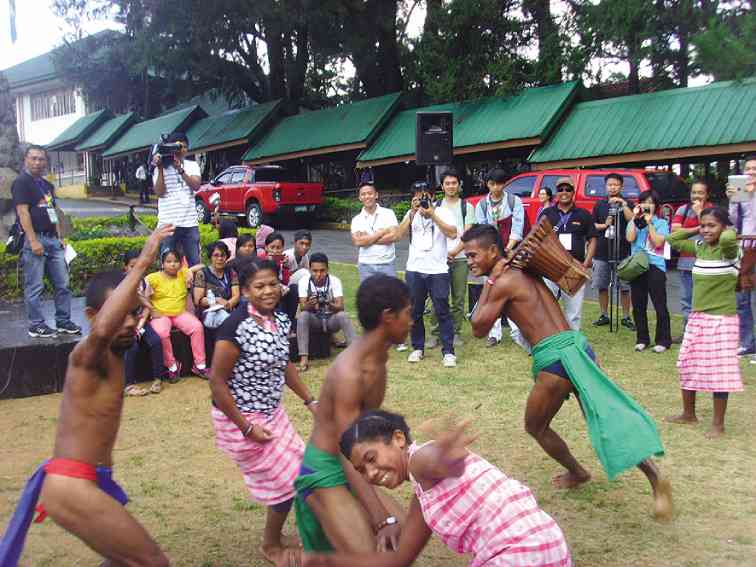 Amid encroachments by commercial developers with the collusion of local and national government agencies, cultural communities recently flocked to Baguio for Dayaw, the indigenous-peoples festival organized by the National Commission for Culture and the Arts (NCCA).

The word dayaw is used by a number of ethnolinguistic groups in the country. It means “respect” in Ilocano; “to take pride” in Ilonggo; and “to praise” in Waray.

Leading the celebration was the NCCA Subcommission on Cultural Communities and Traditional Arts headed by Al Anwar Anzar.

October is Indigenous Peoples Month and Dayaw formally opened in Baguio. Dayaw will also be celebrated in Bacolod City on Nov. 11-12; and in Zamboanga City on Nov. 21-22.

Theme for 2014 is “Katutubong Filipino para sa Kalikasan at Kapayapaan.”

Over 20 ethnic groups from Luzon attended the Luzon leg in Baguio, including the Jama Mapun residents of Palawan. The Jama Mapun are originally from the island-municipality of Mapun in the Sulu Sea, which is part of Tawi-Tawi.

“Dayaw’s aim is essentially to raise the level of the identity, understanding and unity of indigenous Filipinos so that they will be able to help in promoting the initiatives for peace, environment, and other aspects of our needs as a nation,” said Anzar in Filipino.

“We are giving much emphasis on the role of indigenous peoples in taking care of the environment as well as their role in promoting lasting peace in our country,” Anzar added.

Anzar urged all “indigenous Filipinos” to unite; to help and understand each other; and for them not to be ashamed of their culture and cultural consciousness, because once the culture is lost, the identity is also lost.

The event included series of forums on peace and the environment; traditional-cuisine demonstrations; arts-and-crafts demonstrations and sale; playing of traditional games; photo exhibit on the Philippine traditional houses, and the Gawad Manlilikha ng Bayan awardees.

A number of the ethnolinguistic groups showcased their culinary heritage through the cooking demonstration at the Baguio Convention Center.

Viola explained the people of Batanes preferred organic food rather than those fed with commercial feeds.

There were also demonstrations of craft-making to promote indigenous arts.

She called both a “dying art.”

Jamili was one of 12 cultural master awardees during the event, part of NCCA’s School of Living Traditions program.

Jamili said she was happy to receive the award, noting she had passed on the skill to her children and grandchildren.

Traditional games were played at the University of the Philippines Baguio grounds.

Among those played were pulong, pitok, bengel and demet of the Bugkalot of northern Luzon; palsuot of the Iloko; tatus (coconut crab) relay of the Ivatan of Batanes; tugtukan or tachian of the Bikolano; balibagan of the Tagalog; pakapakaak of Bontoc; lipay of the Pala’wan; and baha-baha of the Ibaloi.

But the sport that appealed most to the audience was the indigenous basketball of the Ayta from Zambales.

Called kamatan i-syut sa lubon, the game is played by two teams with three players each. There is only one basket and it is carried at the back of a player. The ball is made of rattan, similar to the one used in sipa or sepak takraw. Teams take turns in carrying the woven basket and shooting the ball.

The game is played in a round court. To score a point, the shooter has to chase and place the ball inside the basket of the running basket-holder.

Tesoro said the different activities gave awareness of the culture of different ethnic groups in the country; appreciation of the environment; and awareness of physical-fitness activities of cultural communities.

In their crafts can be seen the indigenous peoples’ ingenuity and how they creatively make use of the materials surrounding them.

“In their food, crafts, games, dances and music, everything is patterned after the environment,” said Tesoro.

An online article by anthropologist Jesus Peralta, published by the NCCA in 2008, explains why tribes do not exist in the Philippines.

Peralta says a tribe is based on a concept of political identity through patrilineal descent, or descent through the male line, which is defined through the unilineal (patriarchal or matriarchal) descent system, usually patriarchal.

“In the Philippines, technically, there are no tribes since the kinship system among Philippine groups is bilateral, although at times there is a matriarchal bias, especially with reference to postmarital residences,” the article says.

Instead of using the word tribe, Peralta said the correct term for the peoples of the Philippines should be ethnic or ethnoliguistic groups.