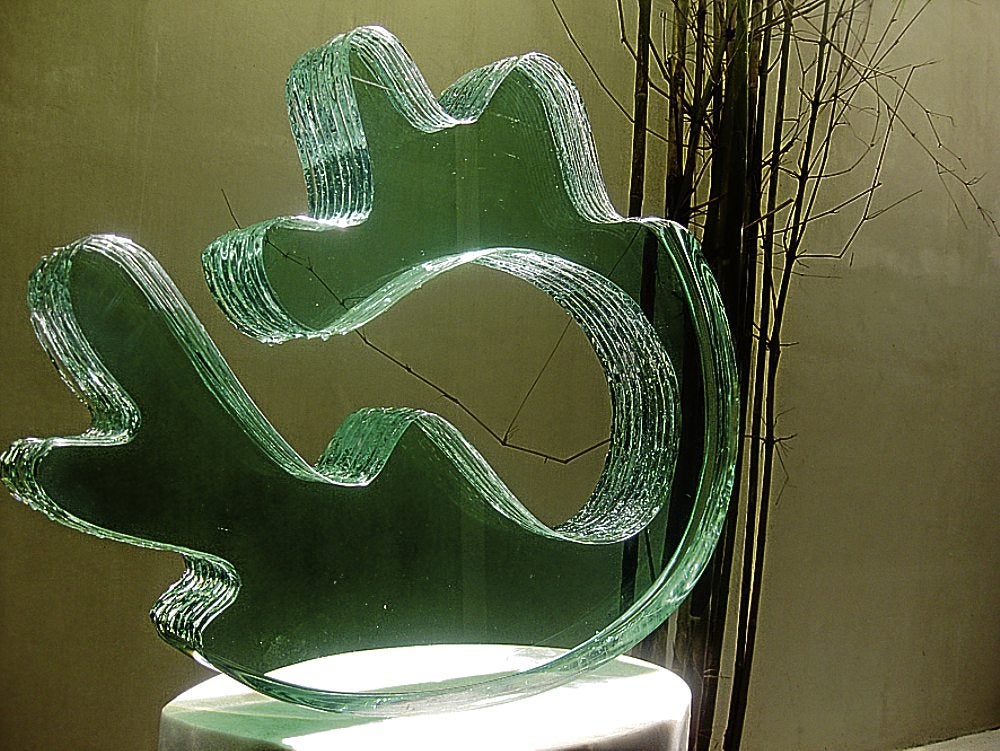 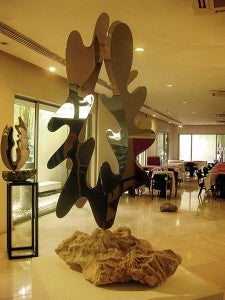 Her every sculptural exhibition is an event, always an occasion for the exploration of her being, each show building upon the previous, not in a manner expecting drastic changes, but as in a scene unfolding an artist’s multiplicity of facets and insights, like the sea’s myriad pinpoints of light glinting in the sun.

Her materials are palpably solid, but beyond their mass and matter, there emanates a halation of spirit and energy, coming onto the viewer in wave upon wave of repose and stillness.

She  said: “As water has been the inherent subject of my work, I think of the ocean as one of God’s life-giving gifts, cradling the universe in its silent and gentle waves, all its sparkling bubbles blowing upward and waving its soul to the world—as if showing the path toward heaven.”

Now on view at  Alliance Française de Manille are Impy Pilapil latest works in a show billed as “Aquabella,” meaning, “beautiful water.” These creations are, once again, three-dimensional radiations of the artist’s continuing journey toward self-discovery and enlightenment.

In her search for a sense of the infinite, through physical materials, she testifies to the capacity of her new sculptures to soar into the vast mysterious realm of the spirit.

It is not too wild a claim to say that Pilapil is, in fact, a rara avis in contemporary Philippine art. She is one of a few and select artists whose initial presence on the scene was marked by a seemingly predestined consistency. Both in sensibility and technique, her works mirror the artist’s spiritual state; that is to say, they were not only embodiments of her aesthetics, wrought in stone, glass, steel and paper, but correspondences and dialogues with the soul.

A dominant subject is the element of water, which, in whatever medium and material, is always a revelation of its essence, remembered in its placid or tumultuous state, in its flow and wave, splash and dribble. Each sculptural work is a simultaneous blend of the lyric and the rhythmic.

Pilapil has already launched several major shows, each a breakthrough in scale and ambition and always anchored on the oceanic theme. 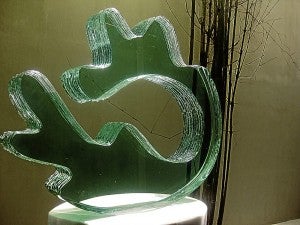 In “Benevolent Force,” large monolithic sculptures were installed in the Ayala Greenbelt and Glorietta gardens.

At the Avellana Gallery, she unveiled a massive and imposing wall of wavelike wood, towering over a spellbound audience.

Compared to such imposing shows, “Aquabella” has a more emotionally intimate and casual resonance, as though the works just breezed through the portals of Alliance Française and cozily ensconced themselves in the pristine white interior space.

Aside from her trademark liquid shapes, the sculptor introduces a most engaging image: the spiral.

Carl Jung, the renowned psychiatrist, regarded the spiral as “an archetypal symbol that represents cosmic force.” Indeed, the spiral is a pervasive presence in disparate cultures, as manifested in Japanese rock gardens, Arabic architecture, African and Australian aboriginal art.

In Pilapil’s hands, the spiral assumes a delightfully exuberant form, dangling from the ceiling as mobiles, consisting of stainless-steel wires spun into a whirl, at the center of which is a glass pane etched with the artist’s familiar wave designs.

Taking pride of place, however, are Pilapil’s “Water” sculptures, rising like a giant splash of crisply glistening steel, balanced perilously on the top of a craggy boulder, projecting a balletic spirit of play.

Declared Pilapil: “The awe-inspiring presence of the ocean has always made me dream about life underwater. The magnificent phenomenon of the aquatic world has fueled this prevailing fascination since childhood. From this I have found continual inspiration to create works depicting the ever-evolving organisms, colors and movement in its vastness—fully aware that all life and spirit of this marine world is a reflection of how everything is connected to the cosmos.”

With the “Aquabella” show, Impy Pilapil proves  she has not yet exhausted mining the depths of the ocean.