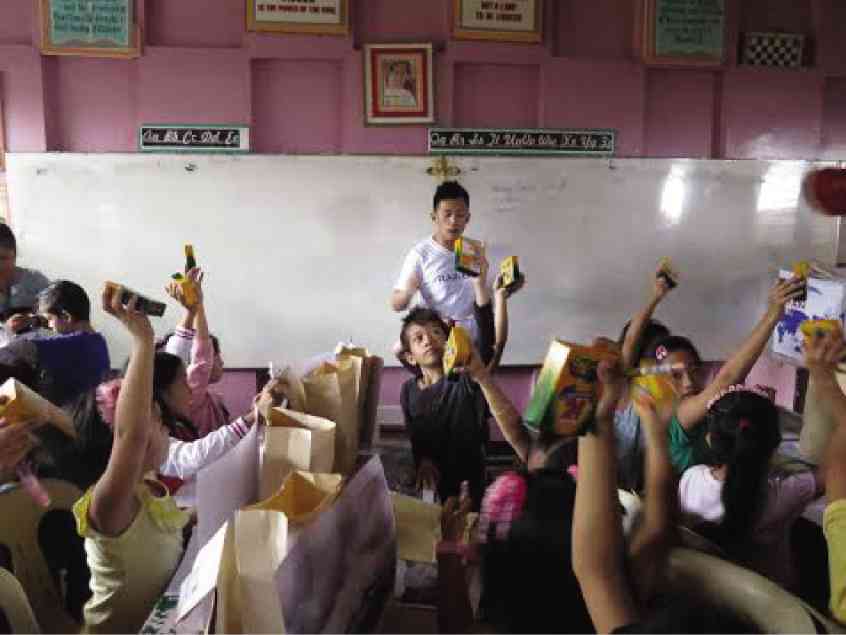 BOXES of crayons are distributed to the children.

Drawing in crayon is therapy of ‘Yolanda’ kids

A year after Super Typhoon “Yolanda” (Haiyan) devastated the Visayas, children who bore the brunt of its long-reaching aftermath have proven to be the most resilient. In the town of Guiuan, a colleague witnessed the opening of several new classrooms.

“The children were overjoyed,” writer Bimbo Santos said on his Facebook status. “Once the ceremonial ribbon had been cut, they rushed inside, eager to sit on their new classroom seats. I’ve been replaying that scene repeatedly.”

Other groups like the Psychology Department of Ateneo de Manila University help the children cope with the trauma through art therapy.

Images by photographer and commercial director Sid Maderazo included an abandoned ship stuck in the sand, clothes set out to dry, a hearse nose to nose with another vehicle, and children playing among the ruins.

These photographs were photocopied. The children were given boxes of crayons and asked to color the photographs. Birds in flight, new houses, suns and rainbows appeared on many of the pictures. A total of 50 “colorized” photocopies were framed and are now on view and for sale at the basement of Globe Tower at Bonifacio Global City.

The entire endeavor has been titled “The Project Rainbow.”

“Hope is innate in kids,” said Angel Antonio, president and COO of Aspac. “On almost all of the pictures are symbols of hope like the rainbow, sun and trees.”

She narrated how one boy colored the marooned ship blue and red. Asked why he chose such distinct colors, he replied that he had seen that ship and that it really was blue and red.

“Children are aware of colors. They may have undergone so much trauma but they are still open and aware of their surroundings.”

Before the official exhibit opening a few days ago, four of the pictures had already been sold. Each is priced from P9,000 to P14,000 although buyers can pay more than the listed price.

Proceeds from the sale of the artwork will go to the rehabilitation activities organized by Ateneo de Manila’s psychology department. The Project Rainbow is ongoing until Nov. 14.