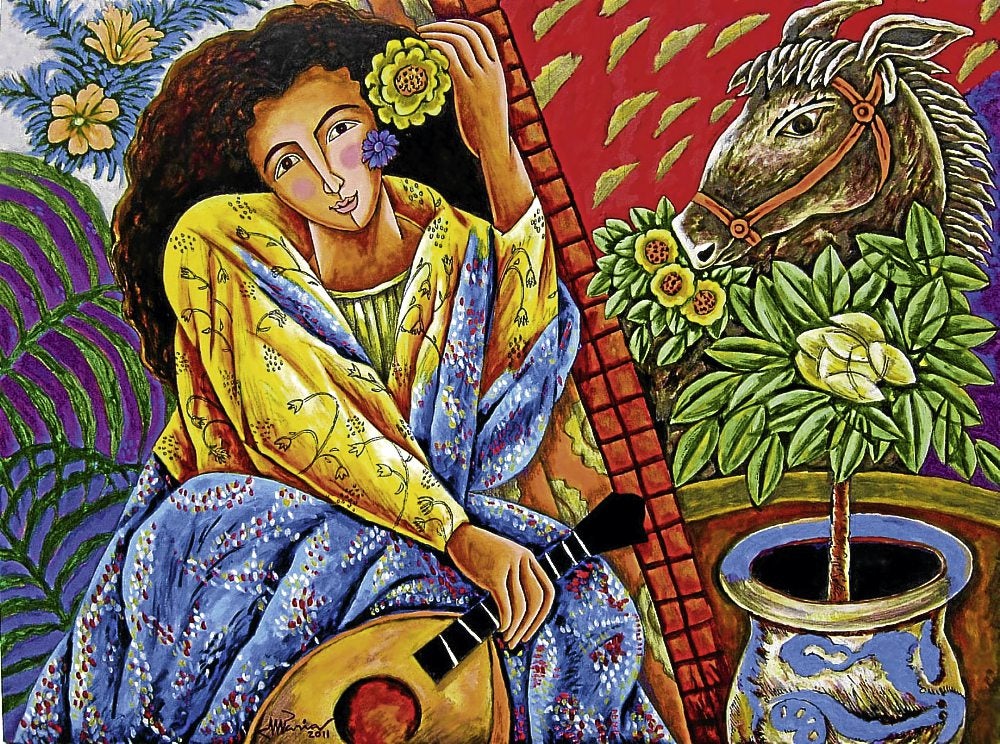 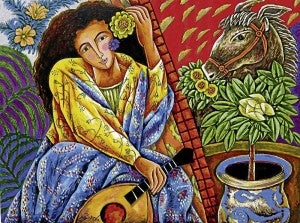 Naïf Artists tend to explore human feeling and expression through simplicity of subject and technique.

Closely related to (and in many ways a subset of) the broad expanse that is expressionism, the term “naïf art” was popularized as a way of describing the works of Henri Rousseau and was initially a pejorative for an untaught painter.

Consequently, it was considered one of many antitheses of Academicism brought about by the advent of Modernism in the twilight of the 19th century. As such, it is often characterized by whimsy, optimism, brightness  and childlike innocence expressed through uncomplicated figurations and fanciful motifs.

It takes an energetic and articulate mind, free from the sense of alienation and antisociety trajectory of Modernism, to see the depth in what is deceptively one-dimensional. In other words, it requires a mindset of innocence and a longing for the utopic (paradise) to understand and appreciate this form.

It is in this light that one should view naïf artist and expressionist Mario Parial (b. 1944). Classically schooled at the University of Santo Tomas College of Fine Arts, Parial belongs to a generation of expressionists from UST that included the likes of National Artists Ang Kiukok and J. Elizalde Navarro, Leon Pacunayen, Antonio Austria, Angelito Antonio and Norma Belluza.

He is a 1972 Cultural Center of the Philippines Thirteen Artist Awardee and has exhibited in many countries, including Germany, the United States, China, Singapore, Taiwan.

His latest one-man show, “Majore: Mario Parial,” featuring 15 major works done during the past year and a half, will open at Galerie Joaquin at 6:30 p.m. on Oct. 12 and will run until Oct. 26.

One may see strains of Rousseau in Parial’s works—the compositional framework is similar and the bold outlines and bright colorization are characteristically expressionistic—or a bit of Chagall with his floating and dreamlike figures, and even a touch of Matisse with his brightly hued patterns. 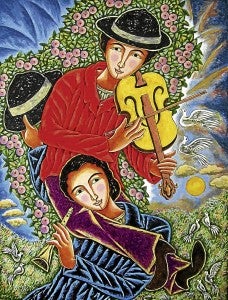 But what sets Parial apart is his use of Filipinized motifs, taking his cue from folklore, traditions, idioms, that are immediately tropical.

Thus the palette Parial uses is unique—the equatorial light giving his hues intense saturation that only play to the whimsical backgrounds he sets his subjects in.

In “Majore,” Parial extends his well-regarded series of women vendors and places his subjects in garden settings, surrounded by floral ornamentation and often in a state of whimsy, as if in a dream. Frequently, his subjects are depicted playing musical instruments, adding to the playfulness of his works.

The overriding feeling one gets from a survey of his works is the creation of paradise. In Parial’s world, there is never any lingering doubt or sense of hostility or estrangement. What viewers get is a sense of joy behind a subtly manic energy that is driven by imagining utopia.

By creating his own paradise, Parial can proudly take his place in the hierarchy of Philippine art without the cynicism that is sometimes attached to his contemporaries.

In “Majore,” Parial presents a magical world in works such as “Dreamlike Serenade,” “As Romance Blossoms,” “Midafternoon Daydream,” “Shower of Blessings.” In this show, Parial revisits themes close to his heart such as music, vendors, flowers and women, the moon and its mystical influence.

“Promises of Plentitude,” “The Quarter Moon and Watermelon,” “A Feeling of Plenty,” “Joyous Afternoon” and “Embracing Abundance” are the artist’s interpretation of the thematic harvest. “Homage to Music,” “As Romance Blossoms,” “Dreamlike Serenade” and “Mid-afternoon Daydream” are his painterly homage to music.