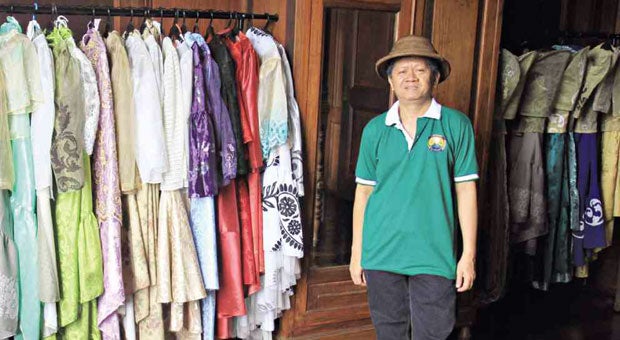 QUEZON, Philippines—Eriberto Ricardo J. Dedace has an endless passion to learn the history of his native town of Sariaya in Quezon province and to protect its legacies in ways he describes as “fulfilling and lots of fun.”

“It’s so nice meeting new people and possible new friends and network colleagues every time. There’s really never a dull moment in the tourism industry and I get to share a lot about my beloved Sariaya in the process,” he posts on his Facebook page “Eric Dedace.”

Dedace sees himself more as a “tour guide,” “storyteller,” “local heritage researcher” and “writer” than an agriculture graduate from the University of the Philippines Los Baños in Laguna in 1983. He is the go-to guy for visitors who want to explore and learn the rich culture and traditions of Sariaya at the foot of mystical Mt. Banahaw.

As a staff member of the municipal tourism office, Dedace’s tasks include guiding visitors—mostly students, media people, academic researchers and local and foreign tourists—who wish to have a glimpse of Sariaya and discover its gem, the Spanish-era ancestral mansions.

Ten heritage houses are found in the town center and a couple more outside.

“A relevant tourism program of any locality should be anchored on its rich and colorful culture and tradition,” Dedace says. He enjoys sharing with his guests the interesting stories behind the cherished past of his town.

The growing interest in Sariaya lies mainly on the distinctive designs of its old yet still stately mansions. Four have been recognized by the National Heritage Institute for their historical and cultural significance.

The ancient art-deco style houses exude a “harmonious marriage of Spanish-era conservatism and modernism of the West during the early years of the 20th century,” Dedace says.

Their owners, just like other rich Quezonians, profited from the copra trade boom with the US during that period, which, he says, “opened the door for their assimilation of modern European and American influence on building and construction style.”

“The owners can afford to hire Western-trained architects in Manila to design their dream mansions,” he adds.

But he laments that Sariaya tourists have not become as frequent compared with past years when they usually came in bus fleets. He attributes the situation to the current tight financial condition of most Filipinos.

One of the most popular parts of the tour experience is the rare chance for every guest to relive the past by transforming themselves into principalia during the Spanish era.

Tourists can wear a Maria Clara costume made of piña fabric with billowing lacework sleeves or the Spanish-period barong Tagalog for P200 as rental fee.

“Do what you want to do. One can imbibe the spirit of the house. Take selfies or group shots for a classic throwback Thursday experience,” says Dedace.

For a complete trip down memory lane, the house guests can enjoy a feast of sumptuous Spanish dishes using the Rodriguez family’s delicate porcelain and silver tableware spread over fine-wood dining table.

In some instances before the tour, Dedace himself prepares the ceremonial welcome for the guests in a ritual called tagayan, a drinking tradition where host and guests sip lambanog (coconut-based liquor) from a single glass amid songs and dances.

Dedace is also one of the vanguards of the Sariaya Heritage Council, which vigorously opposed the road-widening project in the town center as it would tarnish the grandeur of some heritage houses.

US-based lawyer Robert Racelis is one of Dedace’s avid readers. “I like the way he digs into some religious, cultural and social practices in our town by interviewing our old-timers to get firsthand information and sharing them with us,” Racelis, a former vice governor of Quezon, writes in an e-mail to the Inquirer.

Dedace’s writings and advocacy to preserve the heritage houses, monuments, buildings and bridges succeed in “preserving the historic, architectural and aesthetic character and heritage of our town,” he says. “It has sparked in us a sense of community pride.”