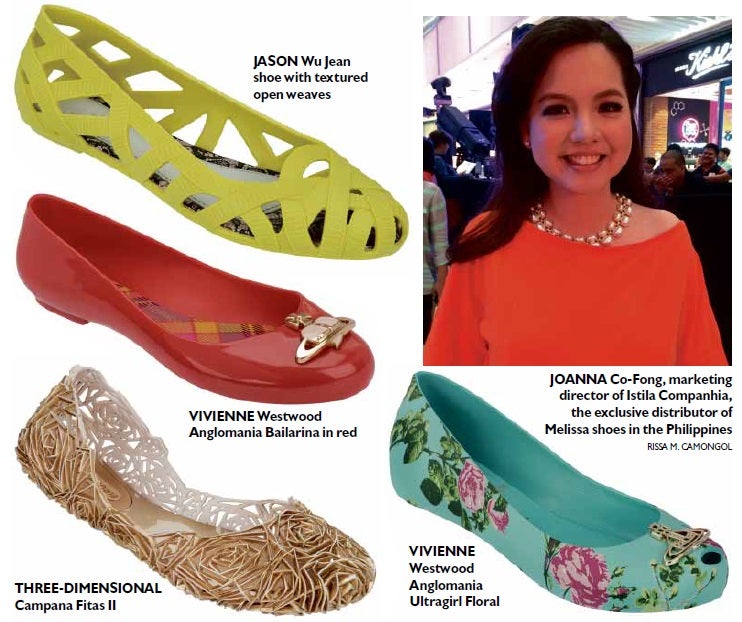 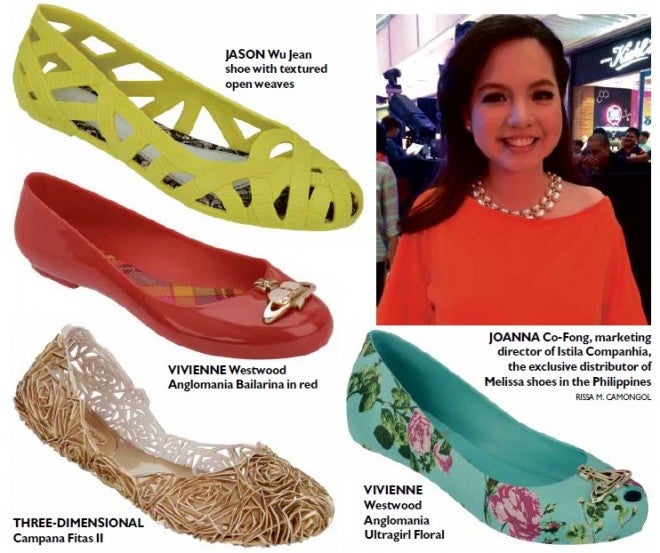 From afar, the celebratory mood was palpable as festive music played loudly and drifted from the activity center to the halls and walkways of the mall.

A closer look showed bright lights, giant illustrations of famous landmarks worldwide, well-executed displays of beautiful and colorful footwear and a quirky photobooth—all designed to whet the guests’ appetite for what was to come later in evening.

This was how Melissa shoes wanted to celebrate its 35 years in the footwear industry—with a grand, colorful and stylish showcase of the latest collection of its candy-scented jelly shoes, held last month at SM Aura.

With the theme Melissa Conquers the World, the celebration highlighted Melissa’s collaborations with some of the world’s most renowned names in fashion and design.

“The inspiration for this season are the designers from different countries,” said Joanna Co-Fong, marketing director of Istila Companhia, exclusive distributor of Melissa in the Philippines.

The giant postcards setup during the event depicted iconic travel destinations such as the Eiffel Tower in Paris, Big Ben in London, Christ the Redeemer in Brazil, the busy streets of New York and the pristine beaches of the Philippines.

Guests were encouraged to have their photos taken with the giant postcards as backdrop and upload them on Instagram for a chance to win prizes courtesy of Melissa.

A fashion show featuring the latest collection followed. Hosted by actress Nikki Gil, the show was punctuated with energetic dance numbers, infusing an electric vibe into the already festive night.

A product of Brazil, Melissa shoes use a patented Melflex technology—a hypoallergenic, recyclable and flexible material—making them “quite comfy,” said Fong. “They mold to your feet, and they’re fashionable.”

Fashion heavyweights like Vivienne Westwood, Karl Lagerfeld, Jason Wu, Gareth Pugh, J. Maskrey and the Campana brothers have all forged partnerships with Melissa to create their own line for the brand.

Furniture designers Fernando and Humberto Campana have built a design empire through their use of ordinary materials to create outstanding products. The Melissa + Campana Fitas and Papel designs with glitter accents in new and bolder colors are also available now.

Legendary fashion designer and style icon Vivienne Westwood comes up with a creation that shows off lovely floral prints in muted colors. Pairs from this line will come out in December.

As part of the collection, Melissa revives the iconic Aranha, its pioneer shoe that came out in 1979. The strappy, closed-toe sandals will be available in new colors in February 2015.

Paris-based German designer Karl Lagerfeld delivers two creations for the collection: a baby doll shoe with a twist, and a shoe featuring intertwined lines in nude tones. These two designs will be rolled out in March.

In addition to the new collection, Melissa will also be offering limited-edition shoe bags as part of the company’s 35th anniversary celebration. The bags will be available next year for a short time only.