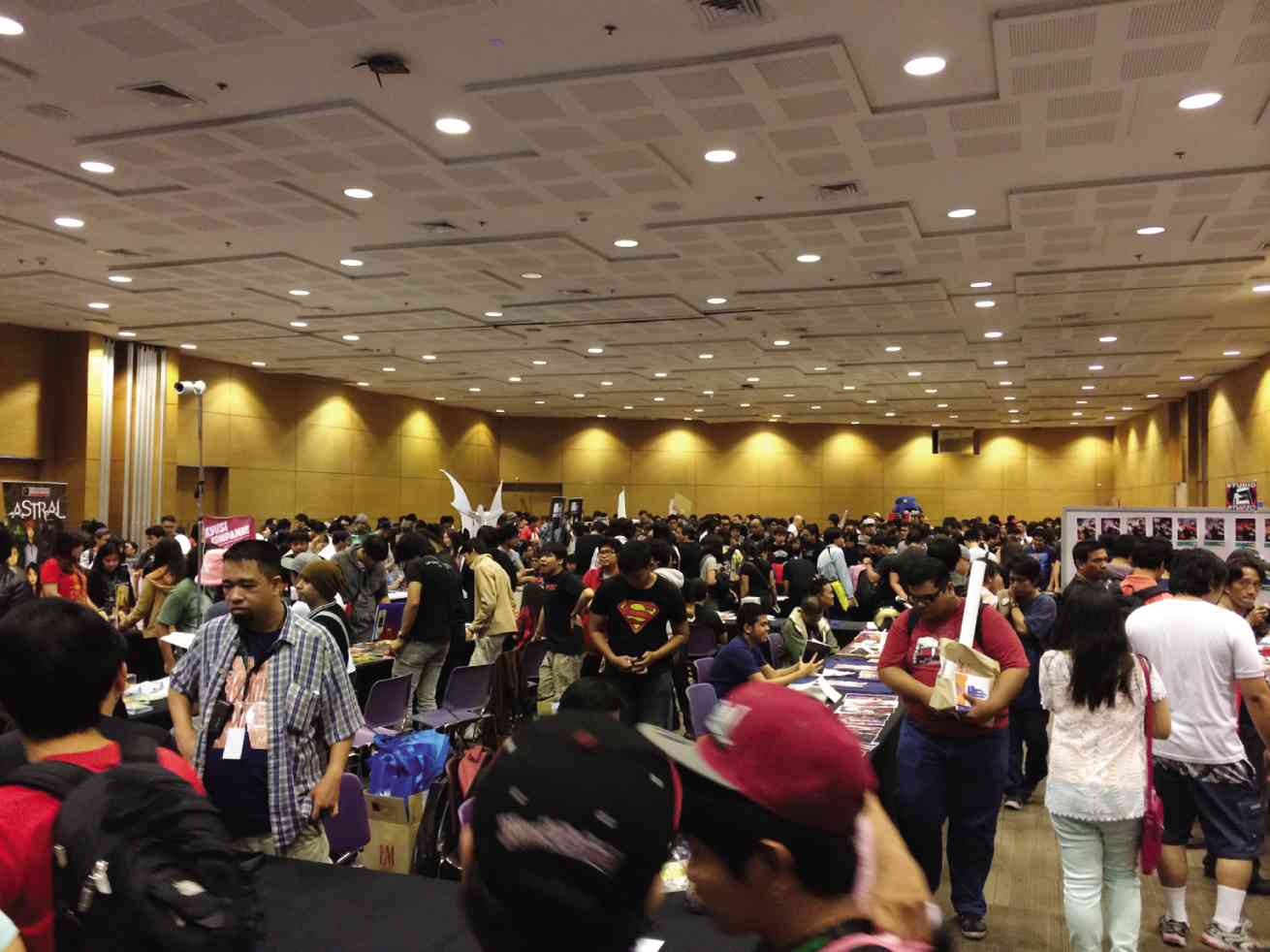 THE crowd at Komikon PHOTOS BY RUEL S. DE VERA

What began in 2005 at the University of the Philippines-Diliman campus as a small get-together for the Philippine comics industry’s movers had grown over the years—including the stopover at SM Megamall and Starmall—to become what it was at the Bayanihan Center, a massive mainstream event for fans and industry members alike.

It had the best showcase for new titles for both established and new publishers; it gave a chance for those new to the fandom to drink in the atmosphere and buy lots of stuff; and it served as a grand reunion for all those who loved and worked in Philippine comics then and now.

The energy was high, the crowd buzzing in the main hall and the conferences rooms. This being the 10th iteration of the Komikon made for a meaningful occasion, and this feeling was rewarded by the presence of many of the comics industry’s brightest lights: Manix Abrera, Gerry Alanguilan, Arnold Arre, Kajo Baldisimo, Pol Medina Jr., Budjette Tan and Carlo Vergara, among many others.

While the fan-voted Fourth Komikon Readers’ Choice Awards recognized the best in the field, the day’s most touching moment came when the Komiks Legend Award was given posthumously to National Artist for Visual Arts Francisco V. Coching. His wife, Filomena Navales Coching, was on hand to receive the award from Komikon president Ariel Atienza.

Komikon, of course, offered up the latest titles from local creators. Graphic literature heavyweight Visprint Inc. had on sale new titles such as Abrera’s unusual “14,” Tepai Pascual’s beautiful “Maktan 1521,” and Mervin Malonzo’s stunning “Tabi Po Isyu 2.” The lines were long for fans waiting to have their copies signed by the Visprint talents.

Probably the most memorable fan in line was a cosplayer dressed as the character No Face from Hayao Miyzaki’s “Spirited Away.” In the crowd, one could see a dad in a “Trese” T-shirt carrying his young son dressed as the DC speedster The Flash. Now that is starting them young.

At the Nautilus Comics booth, Arre and wife Cynthia Bauzon-Arre proudly stood behind the slick new edition of “The Mythology Class,” the first-ever recipient of the National Book Award for Comic Books.

Nautilus marketing director Iyay Dumdum-Bautista was promoting Ballet Philippines’ upcoming “Manhid: The Pinoy Superhero Musical” that features music from, among others, the Eraserheads.

“Bakemono High” creator Elbert Or was peddling his new comic “Baby Daddy & Baby Baby” (it’s as funny as it sounds) while waving the cutest item from the event, a figurine of “Bakemono High” werewolf Chuck. Or says a figurine of adorable witch Salem will follow next year.

Andrew Drilon was back with his “Kare-Kare Komiks Platter.”

There were also passionate first-time publishers, like sportswriter and long-time comic fan Rick Olivares who was selling two books: the offbeat underworld comedy title “Dante: The Afterlife is Just the Beginning” illustrated by Niño Balita; and the spooky “Ang Ilog,” with classic komiks-style art by Rey Asturias, available in two sizes and two languages.

This was just a sampling of the diverse range of books, from off-set, bound ones to photocopied mini-comics, ready to be discovered by the thousands of fans who packed the venue.

You could also watch a movie (“Tiktik: The Aswang Chronicles” and others), commission a sketch on the spot, buy merchandise, fill the holes in your collection at the Comic Odyssey booth or purchase attractively-priced trade paperbacks at the National Book Store booth.

The Komikon has always been about fandom and continuing productivity. The outstanding turnout at its 10th edition proves that its accessibility and ranger of offerings continue to make it the definitive and most fan-friendly pop-culture event of its kind.

The countdown to Komikon XI begins.

Here are the winners of the Fourth Komikon Readers’ Choice Awards, as voted by the fans: