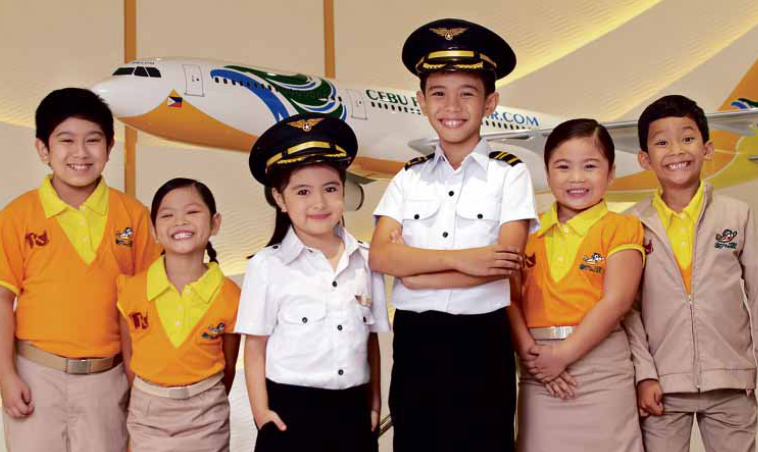 The head of the Philippines’ biggest budget airline, perhaps following his personal story, wants the country’s youth to get an early start in life.

That desire appears to be the driver in Cebu Pacific CEO Lance Gokongwei’s decision to partner with KidZania, the global leader in children’s educational entertainment that traces its roots to Mexico.

Its main focus is on role-playing and teaching children from ages 3 to 14 the value of hard work.

Gokongwei, who played a central role in growing Cebu Pacific from its launch in 1996 to its present position as the Philippines’ leading domestic carrier by market share, said children having early exposure to experiences would enjoy long-term benefits.

“They can have fun while discovering the value of work, even at a young age, which I think is certainly a good thing. We have been taught in our family about the importance of diligence and how work can be fun if you enjoy what you do,” Gokongwei said in a speech during the formal launch of the partnership last week.

“My first real memory of travel was at the age of 7. My parents used to take us to Hong Kong. My main takeaway then was that there was so much more to see and experience, and I haven’t stopped traveling since,” Gokongwei said.

“Opening our eyes to adventure, things can happen, opportunities can open up, and discoveries can be made. This is very much part and parcel of our partnership with KidZania Manila, Cebu Pacific’s newest destination,” he added.

The partnership with Cebu Pacific is expected to enhance the experience and realism for children visiting KidZania Manila, an interactive “play city” built just for them.

KidZania Manila will be operated by Play Innovations Inc., a subsidiary of Lopez Group’s ABS-CBN Corp.

Inside KidZania Manila, children can role-play more than 100 careers—from pilots and doctors, engineers and bank tellers, to actors and artists.

Establishments that are universal favorites among children who have visited KidZania in 16 cities all over the world will also be at KidZania Manila—an aviation academy, bank, fire station, hospital, television station, and a variety of other establishments that form the working core of a real city.

While working at different establishments, kids will earn KidZos, the official KidZania currency. They can choose to save or spend these KidZos during their visit.

In KidZania Manila, children will check in at Cebu Pacific counters, get their Cebu Pacific boarding passes, and enter the facility.

“The plane is a very big part of the attraction at KidZania,” ABS-CBN chair Eugenio “Gabby” Lopez III said.

“When we talked to Lance, he immediately signed up for this particular venture. We’re very thankful to Lance for agreeing right from the start that this is going to be something where both of us share the same values of what kind of world we can build for children,” Lopez said.

The partnership is timely given the expected growth in the aviation industry, meaning early training here could prove a boon for children aspiring for a career in the skies.

The International Air Transport Association (IATA) recently predicted that the Asia-Pacific region would see 1.8 billion passengers in 20 years, swelling the market size to about 2.9 billion passengers. IATA said that figure would account for 42 percent of global passenger traffic.

That means more pilots and cabin crew will be needed to fly more planes to support the bigger demand.

And in the aviation academy, children can train to be a Cebu Pacific pilot or flight attendant.

With the help of Zupervisors, the young pilots of KidZania can experience flying and landing aircraft using state-of-the-art flight simulators.

KidZania flight attendants can learn how to ensure the safety and comfort of passengers through safety demonstrations and games.

“Children with dreams of becoming pilots can now experience safely taking off and landing in various destinations. Kids who aspire to be flight attendants can also get acquainted with the in-flight cabin crew experience,” Gokongwei said.

“Kids and their parents can expect state-of-the-art technology at the brand-new Cebu Pacific Aviation Academy, with the same look and feel of an actual Cebu Pacific flight experience,” he said.

For Maricel Pangilinan-Arenas, governor of KidZania in the Philippines and president and CEO of Play Innovations Inc., the partnership with the budget carrier was a natural choice.

“A lot of kids dream about becoming pilots and flight attendants. Cebu Pacific is the perfect partner to introduce these kids to a Juan-of-a-Kind learning experience and the joys of ‘traveling’ to a new city,” Arenas said.

The first KidZania, founded by Xavier Lopez, opened in 1999. It has since received more than 25 million visitors, with half a million to a million people visiting annually.

At present, there are 16 KidZanias, located in 13 markets, with nine others expected to open over the next few years.

Here we go with KidZania Go!