Saved by the storytellers | Inquirer Lifestyle 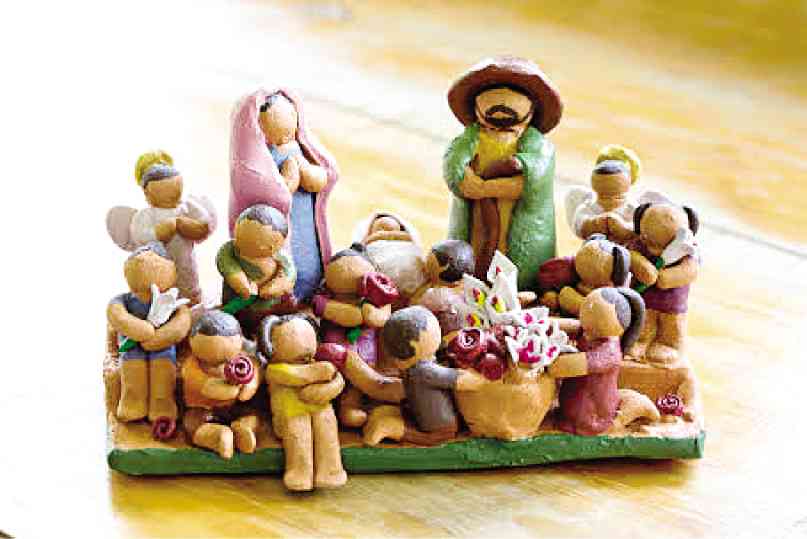 Saved by the storytellers

Before anything else, you are struck by how absolutely cute they are, little clay communities of rotund people dressed in bright colors, congregating around a central figure—an  image of the Virgin Mary,  or a corpulent woman overrun by little companions climbing affectionately all over her.

And then the minutiae strike you: an intricate rose here, a nonchalantly crossed leg there, even a vendor’s tray of tiny pieces of puto bumbong—little people getting together, interacting and telling very Filipino stories.

They are, after all, called storyteller dolls, and they are the creations of former corporate publishing executive-turned-clay artisan and innkeeper An Mercado Alcantara. To be sure, they’re not just her stories, although her primary inspiration is the culture of the people of San Pablo, Laguna, hometown of her husband of 22 years, businessman Boots Alcantara—a town she has, An emphasizes, “fallen in love with.”
The couple runs Casa San Pablo, a lovely inn with quirky rooms, green spaces and homegrown coconut-based cuisine.

An talks to her organic creations, which often materialize between her hands without much thought or planning. “Sometimes I look at the clay and say, ‘O, anong gusto mo?’” she admits. “And then, when something becomes clear, I say, ‘Oh, that’s what you wanted,’ or ‘Hello, there you are.’”

The effect, then, is a doll who, despite a lack of features and details—“I never did learn how to do proportions,” An says—somehow resonates with the small-town, neighborhood kid in all of us.

An’s love affair with clay was a long time coming. This Interdisciplinary Studies graduate of the Ateneo was a preschool teacher, a newspaper writer and proprietress of her own graphics design firm before becoming the founding editor of Good Housekeeping Magazine in the Philippines. She later established Working Mom magazine for ABS-CBN Publishing before chucking the corporate world and slowing down.

“I actually got to know clay playing with my son, Diego,” she recalls. “Sawa na ’yung bata, ako hindi pa. I’d make little animals.” One day, she attended a pottery party where ceramic artist Lanelle Abueva-Fernando conducted a demonstration. “She gave us all pieces of clay, and the minute I held it, something in my past felt connected. It was like, I knew clay.”
Play

In 2004, she sought the guidance of her friend, potter Ugu Bigyan, a virtual neighbor in Tiaong, Quezon. “I don’t make stuff like that,” he said about her little figures, “but if you want, we can just play.” So An would visit every week and tinker with the medium some more.
One day, she opened one of Bigyan’s books to find a feature on Helen Cordero, the  Cochiti Pueblo clay artisan of Cochiti, New Mexico, herself an unschooled potter who invented the storyteller doll. “The first time I saw the works, it was that feeling again, like I knew them. I learned that storyteller dolls actually became a genre because of Cordero. She’s my cosmic mother!”

More lessons followed, including some with Jon and Tessy Pettyjohn; it was Jon who affirmed to An that “You have something there,” she recounts. The exploration was interrupted, however, by a brief return to corporate publishing. “But I kept one of the earliest figures I made on my desk, just to remind myself that I was going to return to it in a couple of years.”

By 2012, An was back at the potter’s table. The plan was to go full-time into pottery and writing books. It was then, however, that a series of personal crises actually cemented her resolve to seize the day and do what her heart wanted.

Earlier, An had had a health scare, a breast mass that miraculously disappeared when doctors tried to locate it again. “What do you do after something like that? You can’t just go back to normal,” she recalls. Then, a close friend and her partner in book projects, writer Raul Rodrigo, died suddenly, followed shortly after by her younger brother, Wawel Mercado.

An recalls just holding on to a piece of unshaped clay, almost like a security blanket, to keep herself focused during those trying times, along with the Zen meditation she has been practising for years.
“It’s funny, the clay was always there, there was a plan, it could be—but the drive to really make it happen did not come from the dream, but became a matter of survival. It was like Wawel was telling me, ‘Go, do what you want to do.’”

Ironically, her first works, the first storyteller dolls, always had happy, innocent faces with bright, wide-open eyes. “People would say, ‘Oh, you must be so happy.’ I knew there was a dissonance between what I felt and what I wanted to show, but then again, maybe there was that happiness inside me. It was like the clay was showing me that there was a way out.”
Expressiveness

In An’s more recent works, the faces have totally disappeared—and yet, the level of expressiveness has been conversely heightened, with a refinement of the details, thanks to a more practiced hand. “Now that I’m no longer so caught in the grief, I realized I didn’t need the happy faces anymore.”
The dolls “debuted” in artisan fairs, appearing in the Maarte fair at Rockwell and most recently at the Yuchengco Museum’s “Habiness” event; they’ll be in more bazaars around town as the Christmas season draws near. The pieces are now also available at Resurrection Furniture and Found Objects Gallery in Quezon City.

It’s a pretty straightforward production process. The shaping of the clays happens fast, in about 15 minutes, then the figure is dried for two weeks before being fired in a kiln for three to six hours.
An brings her figures for firing to Ugu, who also provides her clay, but at the rate the little folks are multiplying, she may just need her own kiln soon. After firing, the figures are then painted.

Among An’s favorite subjects are the Virgin Mary, in several incarnations, including her favorite, Our Lady of Guadalupe. There are still storytellers, and tablets featuring colorful processions or village regulars, like a rice or vegetable vendor. She even incorporates some figures with potted plants. For Christmas, her belen come in different sizes and settings, festooned with parol or with a church as a backdrop.

The Filipino flavor is unmistakable. “The people of San Pablo are such great storytellers, and the processions here are so grand. It’s always a great opportunity for families to come together, and this value for family heritage is one of the things I truly love about this place.”

Now that her dolls are getting more popular (they have a Facebook page, Casa San Pablo Clay Storytellers), An has had to deal with order forms, production schedules and hiring people to help execute her work—“Thank God for Boots, or we would have closed shop yesterday!” she says with a laugh.

Still, she admits to being “conflicted” still about whether or not to sign her pieces. “Well, part of my vision from the start was to make this a folk art, teach it to the women of San Pablo, so they can pass it on, as well. At this point, it’s my concept, but it’s already the work of many hands.”

It’s safe to say An is never going to return to office work. She credits Boots for being “my driving force—not just pushing me beyond my insecurities, but giving me structure.” Diego is 12 now, and would rather hang out with friends than join his folks at Casa San Pablo.

Still, being caught up in a new passion at age 50, An has only encouragement for others in search of a second wind. “Clay saved me. If there’s that uneasiness, and you feel there’s something more, follow it, because there is something more. There are risks, but it’s definitely, definitely worth it.”

For more information about the bed-and-breakfast Casa San Pablo, check out www.casasanpablo.com.