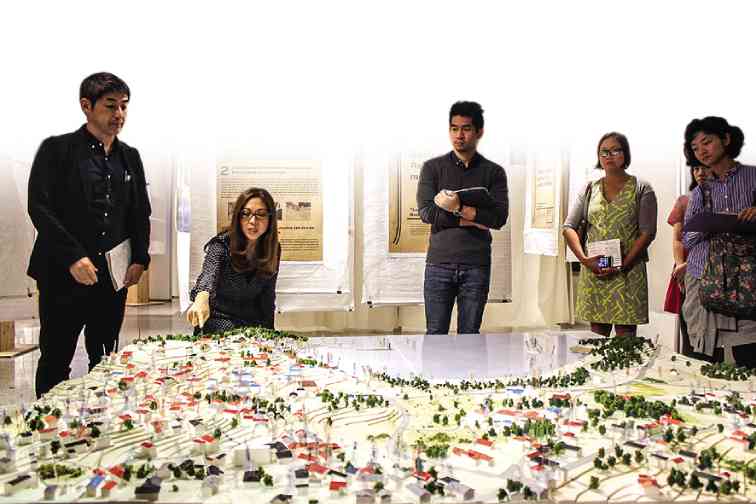 SCALE model of Nagasaki and Odonahoma district in Japan before the Great Hanshin-Awaji Earthquake in 1995 JOHN ERNEST F. JOSE

Art as a tool for disaster preparedness is the main idea behind Earth Manual Project, a Japan-sponsored travelling exhibit showing the creative outputs of artists from different countries in response to floods, earthquakes and typhoons.

Hirokazu Nagata, chair of the project, said the tagline of the exhibit was “A country of frequent natural disasters can also be a country of high disaster preparedness.”

“I had seen various exhibits that tackle disaster preparedness from different countries and they had innovative ideas, and we decided that these ideas be collated and be shared internationally,” Nagata said.

The caravan also made a barter system in which children donate their toys in exchange for other used toys, instilling the value of volunteerism.

“The program has been conducted more than 150 times in 20 prefectures throughout Japan,” said Nagata.

Focusing also on children is Red Bear Survival Camp, where participants are taught basic survival skills such as knotting ropes, filtering water, pitching tent and producing fire. Skill badges are given to children who successfully complete each task.

The Jishin Itsumo Project uses the print media as means of spreading disaster awareness. Its major publication, the Jishin Itsumo Note, records the stories of 167 earthquake survivors in Japan, as well as tips on disaster preparedness based on their firsthand experience.

“People could not move at all when the big earthquake hit,” says a survivor in the book, “they could not hear people crying out for help because their cries were muffed by the sound of the helicopters used by the media.” Paper Partition system, a brainchild of renowned Japanese architect Shigeru Ban, is a partition system that could be used as evacuation facilities. It uses paper-based materials for posts, beams and joints, and curtains.

Proper partitioning gives evacuees much needed privacy and provides orderliness even in a chaotic setting. The material itself is recyclable, easy to install and cost-effective.

The “Lost Homes” model Restoration Project is a scale model of Nagasaki and Odanohama before the Great Hanshin-Awaji Earthquake in 1995. It was conceptualized by Kobe University professor Osamu Tsukisashi. The models were made by university students based on inputs from locals.

“You can have a more relaxed conversation when talking through the medium of the miniature model, an object, than talking directly to people, said Tsukisashi. “The model brings back memories associated with (the survivors’) former homes and is an effective medium for communicating memories to the future generations.”

Thailand’s RooSuFlood: Knowledge to Fight Flood is a series of animated ads that aims to educate Thais on how to respond to floods. The project is a collaboration between students, media professionals, creative artists and volunteers. It is a response to massive flooding in the country in 2011.

Project leader Thawatchai Saengthamchai said public information spread during the emergency was so inadequate and difficult to understand that the viewers didn’t prepare for the disaster.

“We wanted to give information that was accurate, easy-to-understand and truly helpful for their survival,” Saengthamchai said.

Another project from Thailand is Design for Flood, a collection of furniture, equipment and signage designed to float during floods. Examples include school chairs and tables for kindergarten that double as a flotation devices; a foldable boat, a floating toilet, and emergency food rations and manuals kept in a floatable bag.

Indonesian architect Ikaputra designed a temporary housing system called Core House, which serves as temporary emergency shelter for the victims of the Java earthquake in 2006. Its major characteristic is the extension system, which allows the house to expand to accommodate the needs of its user. The money for the extension can come from various aids or from the user’s own money.

Ikaputra was not satisfied with the aesthetics of the houses at first because of the cost restrictions.

“I was very frustrated because I could not feel I was using all my skills as an architect,” said Ikaputra. “But I eventually realized that the important thing was not the aesthetic design, but the system.”

With earthquakes and typhoons afflicting the country over the years, Filipino artists and designers are doing their share to increase public awareness for disaster preparedness.

The Climate School Project is a series of activities by Dakila to raise environmental awareness via music video disseminating climate-change issues (BasuROCK), art exhibits made from recycled materials (BasurART), and collaboration projects with government (BasuraHAND) such as holding a “plastic holiday” in the public markets of Malabon.

Dakila is composed of students, activists, artists and young professionals.

Utilizing social media, Ayala Museum came up with the campaign The Filipino Spirit is Waterproof to give moral support to Filipinos affected by Typhoon “Yolanda.”

The slogan was created by Ayala Museum’s marketing and public relations officer Spike Acosta. It quickly grew into a campaign. Various inspirational posters made by students and creative artists were designed with the slogan attached to it.

Floating Wombs is a series of workshops seeking to treat the psychological trauma of the victims of floodings and typhoons in Cagayan de Oro City and the Bicol region.

Children participate in workshops in drawing, dance, theater, creative writing and storytelling to draw out stories of their experiences during the disasters.

The women attend sewing and cooking workshops. The workshops are facilitated by artist Alma Quinto.

“When you work with the community, you should not behave like an artist who dictates how the workshop will progress, but as a facilitator who works with the participants,” Quinto said.

Forms of Recollection are sets of furniture in resin that contain debris from houses ruined by disasters. Conceptualized by Dan Matutina, the furniture items transform ruins into symbols of hope.

“Forms of Recollection is melancholia put to good use. By encasing rough and broken materials, we create a graphic memento that is functional in everyday life,” Matutina said in his website.

The Earth Manual exhibit is running at Ayala Museum until Dec. 7. Visit www.earthmanual.org/exhibition/en.