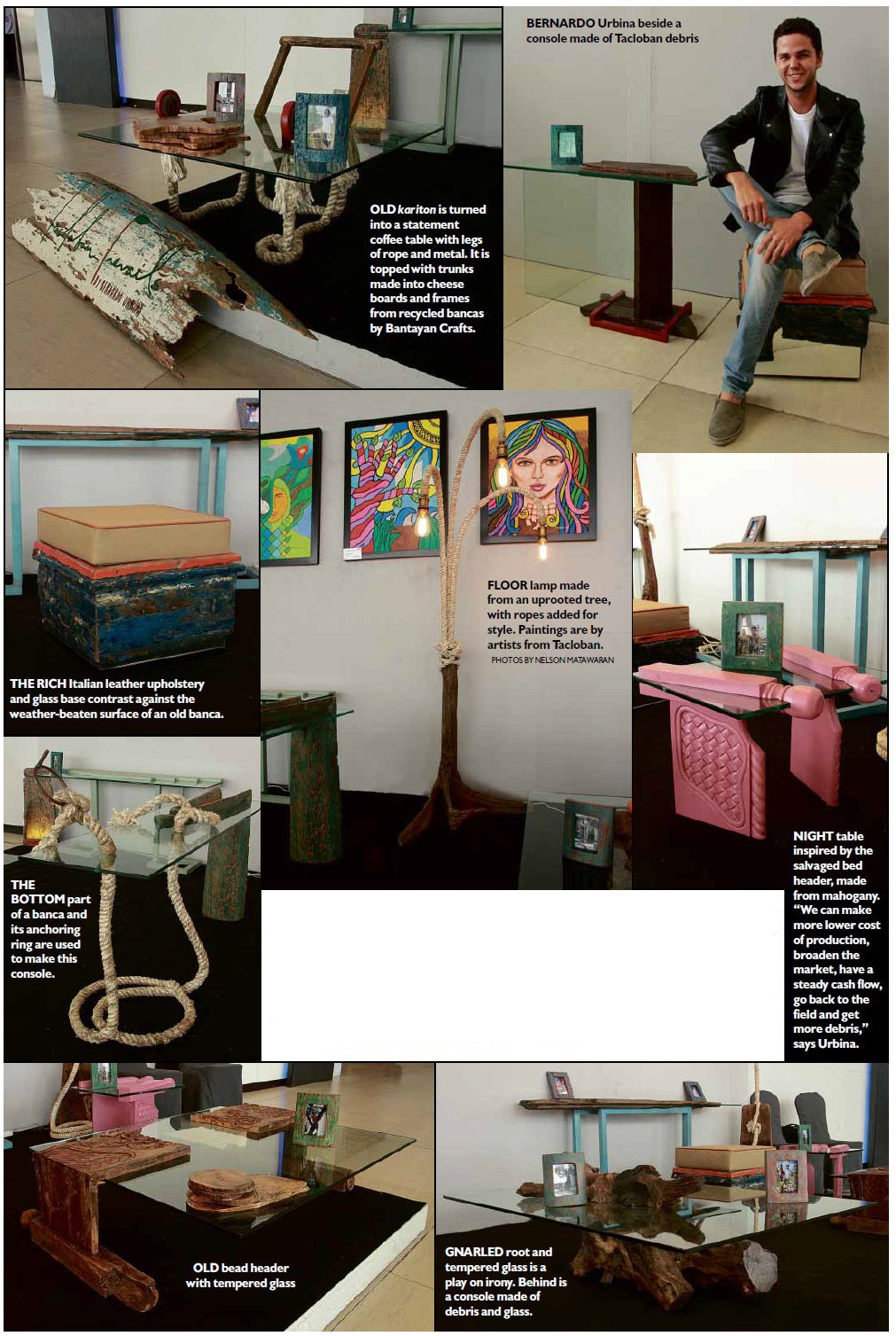 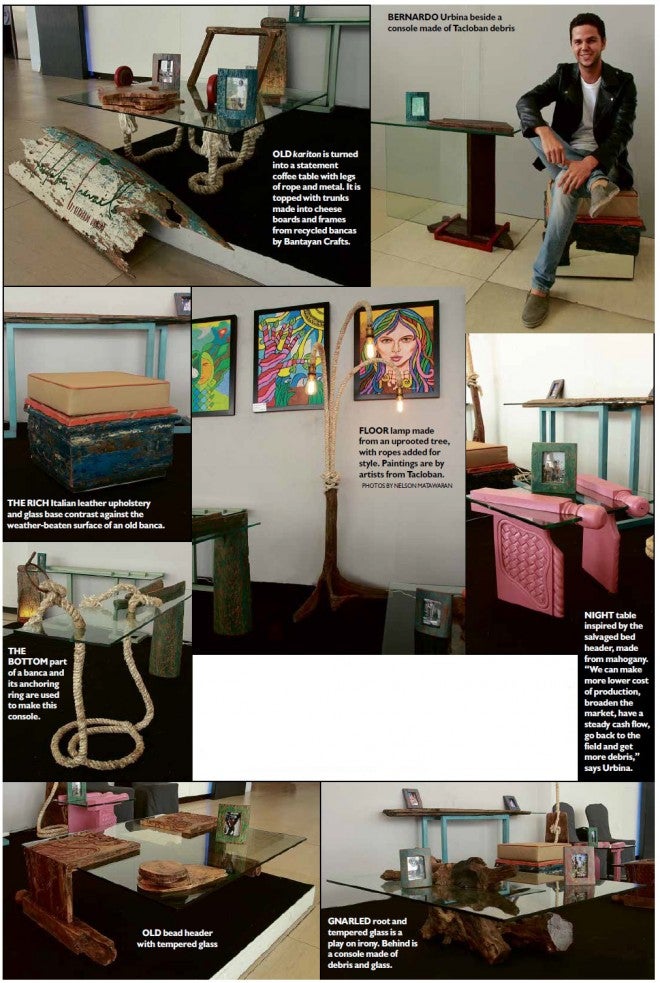 A young designer has been working in the field of socially responsible design, collaborating with Super Typhoon “Yolanda” survivors, Cebuano craftsmen and manufacturing companies.

Bernardo Urbina from Costa Rica has come up with Tacloban Prevails—a template for a furniture line that has been repurposed from items salvaged from the Yolanda disaster.

His industrial design degree from the Pratt Institute in New York helped Urbina land a job at John Houshmand, a design firm in SoHo. The company is known for combining the rawness of wood with the sophistication of steel and glass to produce furniture that is both functional and sculptural.

Although he enjoyed his work, he felt the urge to take his skills to another level. He moved to Milan to get a master’s degree at Politecnico di Milano. He went on to design booths for Italy’s furniture trade show, Salon di Mobile; 100% Design London, the UK’s largest design trade show; and a design exhibit at the Triennale Museum in Milan.

Urbina struck friendships with a few Filipinos who invited him to the Philippines for work and leisure.

For six months, the Costa Rican was a senior designer for Cebu’s Vito Selma. Urbina was here when the earthquake struck the Visayas in October and then Yolanda in November.

Between work projects, he would go home to Costa Rica and see fallen trees and debris. At the back of his mind, he wanted to create furniture that combined the organic with the modern.

Last January, Urbina and his girlfriend visited Malapascua, an island off northern Cebu which had been badly hit by Yolanda. Seeing the depressing conditions, he thought of buying the debris which seemed to hold no value. He saw the potential of it being transformed into one-of-a-kind furniture and allowing the storm survivors to earn a modest income.

“I could use my knowledge and skills to build furniture and help someone else at the same time,” said Urbina.

Urbina credits a British driftwood sculptor, James Doran-Webb, for mentoring him in this undertaking. A longtime resident of Cebu, Doran-Webb had helped create a livelihood project in Bantayan Island. When Urbina broached the idea to him, Doran-Webb linked him up with his contact in Tacloban.

Urbina chose to forego his tour of Southeast Asia and used his savings to buy debris and other materials for his project. To test the waters, Urbina worked with small production shops, explaining in Bisaya his designs. He was also assisted by Carlo Cordaro, the Italian founder of the leading export company Atelier A.

Broken ladders were combined with tempered glass and metal to create coffee tables and consoles. An old kariton was transformed into a wine glass holder. A gnarled branch dramatized a glass table. Broken pieces of bancas became parts of a coffee table or flower vases and candleholders.

The 26-year-old Urbina designed a business model for Tacloban Prevails. The purchased debris would be photographed and displayed in frames that had been recycled from old or damaged boats. These frames were produced by Bantayan Crafts, put up by Doran-Webb for the women in the northern Cebu island. At the time of purchase, the buyer gets the photo of the debris in its original state.

“People are more conscious about the products and materials that they use and how they use it. The consumer wants to understand why the product is the way it is. Telling the story gives more value to the product. There is an emotional resonance with the designed piece,” Urbina said.

When the first collection was launched in Cebu in September, 90 percent was sold just on opening day. Urbina noted that people bought the furniture not for charity but for the design. The influence of John Houshmand was evident in the combination of coarse debris with refined modern materials.

“We want a project that helps a social cause. The furniture piece serves as a bridge of communication between the end user and the affected Filipino. You can see the product’s previous life and how we gave the debris and scrap wood new life by finding a new purpose in someone else’s home,” said Urbina.

Ten percent of the revenue will go to Yolanda survivors who sold the debris, while the customer gets a unique piece of furniture with history. “The affected Filipino not only gets a small income but also a slice of hope,” said Urbina.

In the Manila FAME show last October, Urbina collaborated with Cebu Crafts and Atelier A. With his industrial design background, Urbina’s pieces are structurally sound. The beauty lies in the contrast between the flaws of the felled trees and roots, broken boats and furniture, with the polish of half-inch-thick glass or the use of modern LED for a broken boat tip.

“John Houshmand grabs slabs of wood, leaves the organic shapes and converts them into tables. His influence on me is on leaving the wood in its original state. With the debris, I let the wood stay as it is. I don’t correct it. I try to expose those imperfections that for me are beautiful. Other people might say, ‘This is not straight. I can’t use this for anything.’ I try to work around the flaws and give value by upcycling the materials,” explained Urbina.

The weather-beaten handle and wheels of the kariton were playfully composed with the glass table. Its metal legs were covered with rope to give the illusion of movement. An old headboard with its twin poles was transformed into a coffee table. The end of a banca became part of a glass console table, complete with its rusty ring that once held the anchor.

An ottoman made from distressed pieces of banca slabs was supported by a glass base. However it was wittily topped by an Italian leather cushion.

Urbina designed an inspirational collection, pieces of furniture made from new mahogany that was inspired by the original furniture with debris.

Asked if he had found what he was looking for, Urbina replied, “Living in two design capitals of the world was a bit tiring. Everything there is structured within a time frame. I was missing nature in my life. There was so much movement and hectic pace in those cities that I wanted to go back to the basics.

“Cebu offers not only nature but it is also one of the biggest production centers in the world. Here, everything takes time when done manually. They understand the materials and can craft any design they are presented with. I’ve had the opportunity to work with debris and help people at the same time. It has been a perfect combination of doing what I’m passionate about and giving hope.”