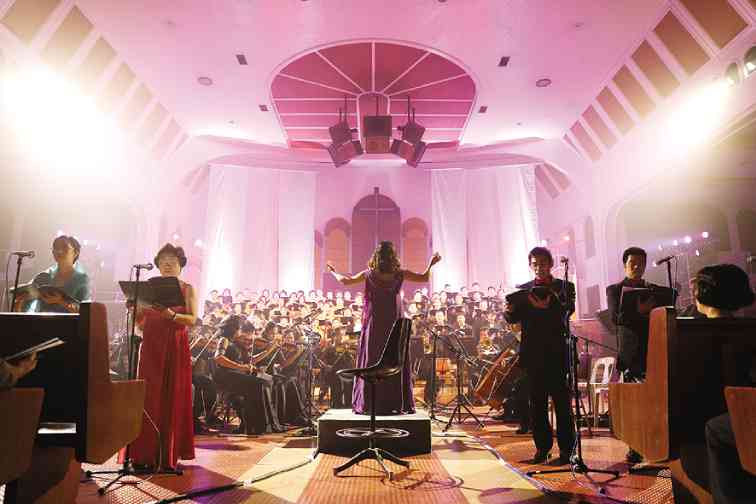 MANILA, Philippines—Music always plays a special role in worship. Hymns and songs uplift the worshipper’s spirit in giving honor, glory and praise to the Heavenly Father.

This, Rev. Tony Cheng, senior pastor of the United Evangelical Church of the Philippines (UECP), said in his welcome remarks at the concert that recently marked the church’s 85th anniversary on Benavides Street in Binondo, Manila.

Highlight was the rarely heard (on the local scene) sacred work by Mozart, “Vesperae Solennes de Confessore.” The Manila Symphony Orchestra (MSO) was conducted by Beverly Shangkuan Cheng, a young woman who holds a doctorate in musical arts in Choral Conducting.

The Hope Handbell Choir complemented the choral singing with the merry chimes of its bells.

Mozart’s “Vesperae Solennes de Confessore,” a work composed of six sections for choir, orchestra and soloists, was rendered with finesse.

Guest conductor Shangkuan made the performance proactive. She provided appropriate information for the audience’s appreciation of the work, which resulted in intense listening.

Vespers are evening prayers, and, set to music, praying indeed became doubly effective. The text was conveyed in arresting aural colors brilliantly etched by the soloists, the choir and the orchestra.

There was unity among the performers. For an amateur, church-based choir, the anniversary choir sounded quite professionally. Tonal balance among the voices defined a well-blended mixed choir. Also, there was balance among the chorus, soloists and orchestra.

In the first movement, “Dixit Dominus,” for instance, the soloists, soprano Yolly Chan; alto Bee Ngo Paredes, tenor Ervin Lumauag, and bass Jonathan Beltran, essayed a well-combed ensemble that matched the ardor of the chorus. The chorus forged a joyous tandem with the orchestra.

Contemplative listening was at its height in “Laudate Dominum,” as soprano Karlyn Kimberly Kwok Tan intoned ravishing melodic lines that inspired rather than dazzled.

The quiet entrance of the chorus in “Gloria Patri” at the end, and the soloist joining in the “Amen,” was nerve-chilling.

The choice of the soloists was splendid. It takes a knowledgeable conductor to consider oneness of vocal texture that fits Mozart’s fine and exquisite lines.

Cheng cut an authoritative presence and wielded the baton with utmost confidence and precision. Dynamism marked her conducting, which showed utmost understanding of the work, resulting in an arresting rendition that lifted the soul, so to speak. Indeed the music was a much-needed balm to the tired spirit.

Providing coherence to the entire program was MSO’s rendition of the prelude and postlude, conducted by Jeffrey Solares, of two Mozart’s works: the Church Sonatas in B Flat Major K. 212 and in A Major K. 225.