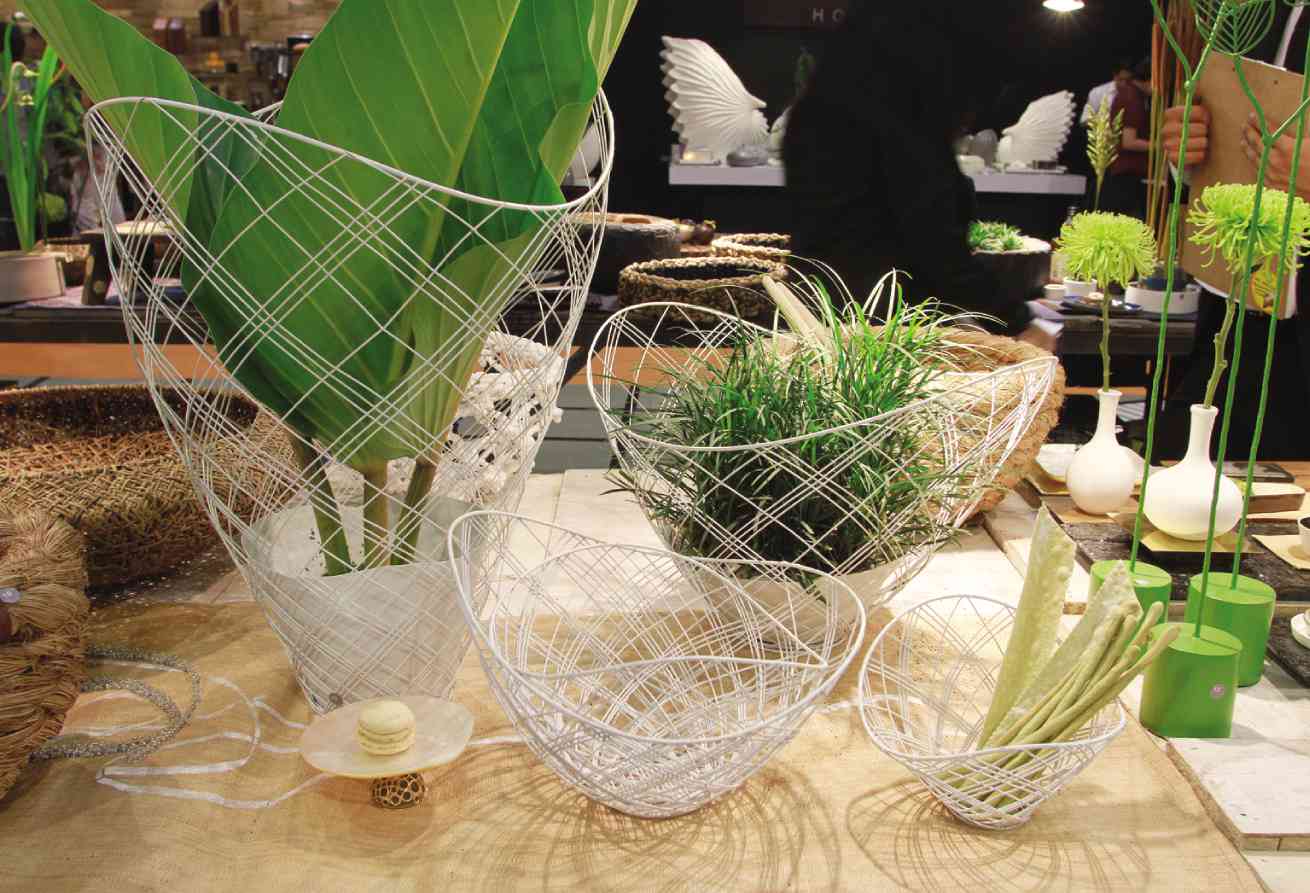 “Buyers had been ordering the same crisscross technique for so long. I wanted to use the same material, but change the function and shape. It goes with the trend for open, light and airy products,” says Prado.

Google Prado Filipino Artisans Inc. and you’ll find a Facebook page instead of a website. Prado doesn’t have one to avoid copycats. “It’s happened many times,” he says.

Prado never had any formal training in art or design. An economics graduate of University of Santo Tomas, he started out in the ’70s as a buying agent, selling wicker baskets and accessories to foreign importers.

However, it became difficult to work with manufacturers who got stuck in formulaic designs.

Color has always been a strong element in Prado’s work. He started the trend in hand-dyed, colored wicker baskets which were imitated later on by other companies.

The more popular designs were made of multicolor woven wicker which made a small fortune for him.

The wicker baskets were found in airline shopping catalogues. His products were displayed in big department stores such as Saks.

Prado also made his way to prestigious stores such as Galeries Lafayette in Paris and Harrods in London.

“I love to conceptualize,” he says. “Buyers say I have an eye for design and color. When I blend the colors, the beauty of the product comes out.”

As the wicker trend waned, Prado shifted to metals such as black iron, wrought iron, tin and wire—their textures a contrast against those of abaca, glass and handmade paper. The metals allowed him to play with shapes and proportions so that, eventually, life-size figures became a staple in his collection.

At the turn of the new millennium, Japan Asean Center chose Prado as one of the Philippine representatives of the Asean Trade Mission for Tokyo International Gift Show and Fukuoka

International Trade Fair. For three years, he was part of the mission and was given a subsidy by Japan.

The grand prize in the Swarovski Design Competition at the Manila Fame Show in 2002 was another career highlight. Prado’s prize-winning entry was a wooden, black, squarish cocktail table with tapered legs, with tasselled Swarovski crystals on the corners.

His other entries, an angel with a votive candleholder and a woman holding a vase, both encrusted with Swarovski, made it to the Top 10 finalists.

His career was at a turning point during the global financial crisis in 2007. As orders stopped due to the economic meltdown, Prado had to downsize his factory in Antipolo.

It came to a point that he asked God if he should continue.

“Still, I was grateful to the Lord. I believed there was an end to everything, including hard times. That’s faith,” he says.

While exhibiting at the Frankfurt Fair, a European came up to Prado to ask him more about his company.

The meeting led to a solo exhibit in a palazzo in Bologna, Italy, in 2010. Prado presented metallic latticework rendered in figurative studies, planters, urns, wall décor, dragonflies and mirror frames in different finishes.

Since then he has joined Seoul and Japan trade fairs, both exhibitions subsidized by the hosts. At the Seoul Furniture Home and Living Fair in April, Prado’s booth was the most photographed.

On the prodding of buyers, Prado experimented with delicate wire.

For the Manila FAME show in October, he collaborated with German design consultant Detlef Klatt to produce tableware.

“I mixed wire with wood or wrought iron with wood. You can see how the industrial mixes well with the natural,” says Prado.

Prado attributes his success to his artisans. “Everything is handmade and hand-tooled. When we work on wire-framed products, the artisans are challenged.”

Buyers were amazed at how the metal was curved delicately to form looping petals and butterfly wings.

“This has been a blessing. From His inspiration, I became wired,” says Prado.