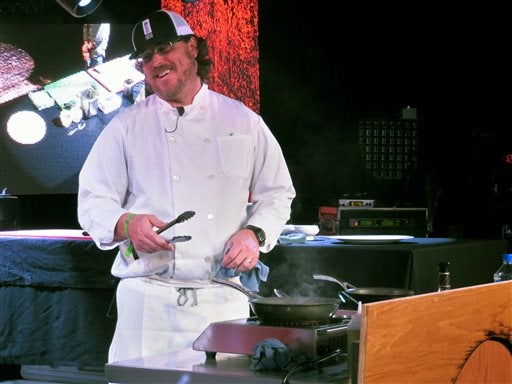 ASPEN, Colorado — Acclaimed chef Chris Lanter is talking through a demonstration on cooking with marijuana. As he prepares steak au poivre, he describes how to deglaze the pan with pot-infused brandy. How to pair marijuana with fine foods. One catch — there’s no actual weed at his demonstration.

Marijuana aficionados paid $250 for a weekend-long celebration of marijuana and food, yet state and city regulations prohibit any “open and public” use of the drug, even at licensed businesses holding private events.

It’s a strange dichotomy. The nascent marijuana industry in Colorado is moving well beyond just pot brownies. Dispensaries are doing a booming trade in cookbooks, savory pot foods and frozen takeout dishes that incorporate the drug. But for now, halting attempts at creating a marijuana dining scene have had mixed results.

Colorado may have legalized marijuana, but it still prohibits “on-site consumption,” a caveat aimed at preventing Amsterdam-style coffee shops where pot can be purchased and consumed in the same place. Recreational or medical marijuana is now legal in 23 states and the Washington capital district — though each state prohibits on-site consumption and pot sales in bars or restaurants.

As Colorado’s recreational industry nears its first anniversary, authorities increasingly are cracking down on attempts to push the pot-dining envelope.

The city of Denver, where the marijuana industry is concentrated, wrote 668 tickets for “open and public consumption” through September, up from 117 the year before, when marijuana was legal, but sales were not. And the county that includes Colorado Springs is trying to crack down on so-called “smoke-easys,” or private clubs that allow marijuana use, sometimes paired with refreshments.

Even private events at restaurants aren’t safe. Denver authorities are using permit codes and alcohol laws to fine and even press charges against people trying to throw private events at which pot foods are served.

The result has been that chefs interested in infusing foods with pot, or pairing regular dishes with certain strains thought to accent a particular flavor, are unable to try it outside catered events at private homes. Even chefs who will talk publicly about doing “medicated” catered house parties, like Lanter, are skittish about sharing details.

“There’s so much potential here, and the interest is unbelievable. But right now, everybody’s kind of scared to be doing it,” says Lanter, owner and executive chef at Aspen’s tony Cache Cache restaurant.

Which isn’t to say folks aren’t experimenting with the limits of the law.

A bed-and-breakfast in Denver offers guests samples of cannabis strains alongside regular breakfast dishes. Guests at The Adagio get marijuana samples at daily happy hours, too, where strains of pot are paired with crudites and bacon-wrapped chicken bites, complete with tasting note presentations from growers.

“It’s a way to bring our guests together and move away from campy, stereotypical pot foods,” says Joel Schneider, CEO of the MaryJane Group, which operates two marijuana-friendly hotels.

But Schneider has to be careful. The pot he hands out goes only to paying hotel guests over 21, allowing him to argue the tastings aren’t public. His attempts to do more public events have been shut down by police. He also avoids serving any foods that contain marijuana, something that could land him a criminal citation.

The events were held at tony bars and art galleries, where guests paid $95 or more for an open bar and a place to use marijuana. Dannemiller received a deferred six-month sentence. Now she is pushing for a new law to clarify how marijuana can be consumed at adults-only events.

Foodies interested in marijuana dining insist the law eventually will change to permit cannabis dining. They say the drug pairs well with food and that public acceptance will grow once people stop associating cannabis dining with brownies and junk-food munchies.