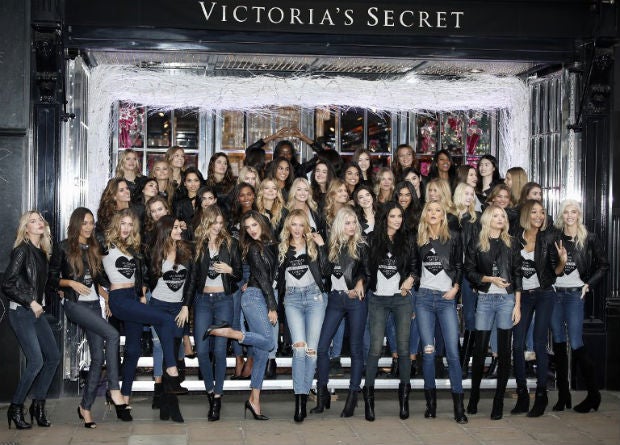 The event was billed as the US company’s most expensive ever with a price tag of $20 million (16 million euros), and featured some of the world’s best-paid models including Brazil’s Adriana Lima.

Only the second time the show has been held outside the United States since 1995, the event began on a glamorous note with the so-called “Victoria’s Secret Angels” dressed in white and sporting gold wings.

British singer-songwriter Ed Sheeran took to the stage to perform his hit “Thinking Out Loud” as models walked the catwalk in colorful outfits inspired by exotic destinations.

US superstars Taylor Swift and Ariana Grande also performed in the show in London — a city chosen over Paris because of its “convergence” between fashion and music, according to marketing director Ed Razek.

“The show is seen in 192 countries, the show is seen by 500 million people. That is completely unique in the industry. No one does what we do,” Razek said.

Swift, dressed in a pink and black negligee, performed her single “Blank Space” in part of the show inspired by dreams and decorated with pearlescent balloons.

A change in ambiance arrived in the fourth section of the show, which was hosted by Grande and was dedicated to the brand’s more casual PINK line aimed at students, with models dressed in leopard prints and bright colors.

Irish musician Hozier then performed his hit debut “Take Me to Church” as models dressed in pale green and pink with transparent fairy wings strutted in a magical setting of white trees and autumn leaves.

Swift then returned to the stage to bring the show to a close with a black and white themed performance as the Angels modeled garter belts and stockings sets.

Created in 1977 and with 1,000 stores in the United States, Victoria’s Secret is the market leader there and made $6.68 billion from sales last year.

It has been on the British market since 2005 and has a flagship store on London’s New Bond Street, one of 15 outlets in the country.

The flashy brand is not to everyone’s taste, however.

Three British students led a successful social media campaign that forced the company earlier this month to change its adverts featuring models wearing its new “Body” bras under the slogan: “The Perfect ‘Body’.”

The ad now reads: “A Body for Every Body.”

But Razek dismissed the controversy as “absurd” as he said the company had never intended to present “an example of the one and only perfect body in the world”.

Describing the models as “healthy” and “confident”, Razek said that those who performed in the show were “genuinely nice women” who defied stereotypes.

“The image of a vacuous supermodel who never eats and only worries about what she looks like is certainly not the image of our girls,” he said.

Swedish model Elsa Hosk said she had prepared for the show, which has helped launch the career of several famous supermodels, with “a lot of different workouts” including a mix of ballet and boxing.

“It’s one of the biggest shows that you can walk in as a model,” she told AFP ahead of the event.

“It’s such an honor for a model to walk in this show, just because it’s huge publicity for us.”

Is lingerie all about pleasing the man—or the woman herself?