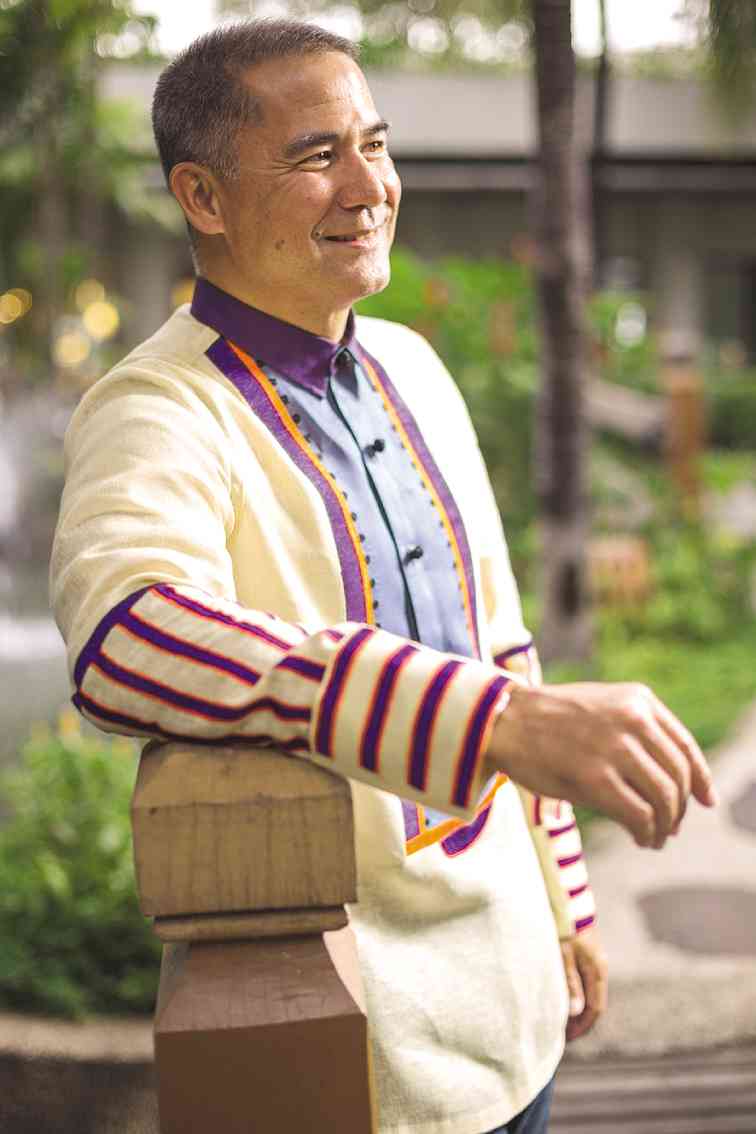 A mutual love of color, wit and whimsy is the inspiration behind designer Jeannie Goulbourn’s collaboration with artist Charlie Co. It has produced 24 unique designs on barong based on 14 of his latest works.

The Co paintings that served as Goulbourn’s pegs are on display at Silk Cocoon, her shop at New World Hotel Makati City. It will also be the venue for “Happy Beginnings,” the theme of the shop’s 19th anniversary celebration on Tuesday night.

Goulbourn said part of the sales of Co’s paintings on Tuesday would benefit Hopeline, the 24-hour hotline that aims to listen to callers suffering mainly from depression.

Goulbourn said she has seen Co’s works and was very intrigued by them, noting they reminded her of Russian-French modernist painter Marc Chagall.

As luck would have it, Goulbourn was in Dumaguete City not long ago, visiting art enthusiast Karl Aguila, when she saw one of Co’s works displayed on his wall. It was time for a proper introduction.

Goulbourn has blazed the trail in addressing depression and the incidence of suicide in the Philippines after her daughter, Natasha, died of overmedication while struggling to overcome depression more than a decade ago.

Hopeline is a project of the TaosPuso Foundation in partnership with the Natasha Goulbourn Foundation (NGF). Set up in September 2012, it has 10 responders manning three Globe-sponsored hotlines.

Goulbourn said the hotline’s records had already tallied around 3,400 calls for the past two years. The calls would spike whenever suicide cases like those of Hollywood actor Robin Williams were reported in the news.

She said these developments have made those behind the hotline realize “we must expand Hopeline to hospitals and churches.”

NGF said the new fundraising effort involves securing more phone lines (by forging a partnership with Smart); setting up these lines in hospitals and churches nationwide; training more responders and gathering and analyzing the data that Hopeline collects from the calls.

Goulbourn said the initial batch of Hopeline responders were trained by a team from Medical City based on a workshop manual authored by doctors Cornelio Banaag, Honey Carandang, Eleanor Ronquillo and Ricardo Soler.

She added that Health Undersecretary Paulyn Ubial is supporting an expansion plan to boost Hopeline’s presence in the Visayas.

The chance meeting between Goulbourn and Co could not have come at a better time.

Co had undergone a kidney operation and spent countless hours strapped to a dialysis machine for months before their meeting. He recorded the experience through art, eventually emerging from the proverbial dark tunnel with a realization that each day must be lived with meaning, energy and a sense of gratefulness for another well-lived day.

“For me, art is healing. I forget that I am sick. I was very productive that time, even while undergoing dialysis. I realized I didn’t want to waste time,” Co said.

He describes the first meeting with Goulbourn as “quite interesting,” adding that he had always wondered how it would be if a known designer “would create fashion from my work [because] I have always been interested in fashion.”

“Not only was his health journey comparable to mine (following Natasha’s death)… I really admire his whimsical paintings and characters. And the colors he used allowed my imagination to come up with 24 designs. There are more percolating in my mind,” she said.

Co’s empathy with Goulbourn and Hopeline is clearly reflected in his “flagship” painting measuring five feet by five feet. At the center is a man with flowers for a face, donning a bowler hat. One hand holds a phone while the other is perched atop what appears to be a metal safe.

The painting’s title, “Your Secret Is Safe with Me,” refers to Hopeline’s vow of confidentiality in handling distressed calls.

Co said he has not yet thought of specific titles for most of the other works. He’s thinking of the word “Being” to call the series—as in “Being happy, being positive, being beautiful…”

Co approached one of the smaller paintings of a man leaning on top of a cloud while taking a selfie. “This one is a dreamer. This one is me,” he said.