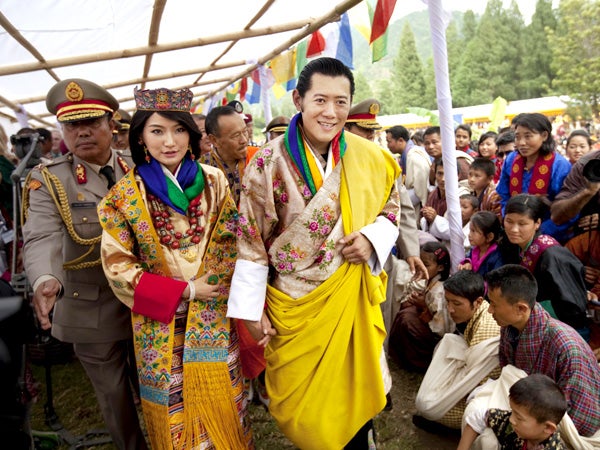 King Jigme Khesar Namgyal Wangchuck, center, and Queen Jetsun Pema walk through the crowd during a celebration after they were married at the Punakha Dzong in Punakha, Bhutan, Thursday, Oct. 13, 2011. The 31-year-old reformist monarch of the small Himalayan Kingdom wed his commoner bride in a series ceremonies Thursday in the 17th-century monastic fortress. AP Photo/Kevin Frayer

THIMPHU—Bhutan’s newly married king is a 31-year-old with a popular touch known to invite his people into his home for tea and a chat.

Jigme Khesar Namgyel Wangchuck took to the throne in 2008 at the start of democracy in the inward-looking Himalayan nation, which is known for its policy of pursuing “Gross National Happiness” and its pre-1999 ban on foreign television.

In three years the young monarch, known variously as K5 – the fifth king – and the “prince charming of the Himalayas,” has emerged from the shadow of his revered father and inspires almost as much devotion from his 700,000 subjects.

He is one of 10 siblings born to the former king and his four wives, who are all sisters.

“The fifth king in a short space of time has performed exceedingly well,” parliamentary opposition leader Tshering Tobgay told AFP. “He has walked the length and breadth of the country and met nearly every citizen.”

But few know much about their new queen, who he wed Thursday in a colorful traditional ceremony, save for a few details about her competitiveness on the basketball court and her tender age.

Jetsun Pema, a 21-year-old student, was introduced to the public in May and has since discreetly joined the monarch on his domestic trips, most recently to earthquake victims in the west of the country.

Since the engagement was announced, her face has adorned a thousand posters, commemorative plates and badges, and her demure looks have apparently won over the public in the country known as the “Land of the Thunder Dragon.”

“I don’t know that much about her, but she’s beautiful,” said Zhung Chuck, a 23-year-old business student. “His Majesty chose the right one.”

Others admire the impact Pema, the daughter of an airline pilot, has made on the king, who talks openly of his love and admiration for her, even holding her hand at public functions.

“He really loves her,” said 16-year-old schoolgirl Jurme Choden as she waited to practice a dance routine for the public celebrations on Saturday. “Wherever he goes he holds her hand. Now young people are starting to copy.”

The royal couple apparently met aged 17 and seven at a family picnic in Thimphu.

After schooling in India and then the United States, the king took a degree in political science and economics at Oxford University, where fellow students remember him as someone serious about his studies.

“He didn’t go to social occasions that much, but he had friends,” said one contemporary, who asked not to be named. “He was very much the same sort of person as you see now as king: solid and reliable.”

The principal of Lungtenzampa secondary school, Kinley Pem, taught both the king and the future queen at different times.

She remembers Pema, who has two brothers and two sisters, as an accomplished captain of the school basketball team and someone who won prizes for public speaking.

“She doesn’t have any airs. I think she didn’t even dream of becoming a queen,” the school principal told AFP.

Pema pursued part of her studies in London, where she is said to have developed a keen interest in the arts. She is now studying for a degree in international relations.

Her future role is likely to be doing charity work and, it is hoped, looking after the heir to the throne once the couple have children.

Since the start of democracy in 2008, the king has a largely symbolic position, occasionally giving advice to the government on constitutional matters but steering well clear of the daily acts of governance.

The Elvis fan and keen mountain-biker, who has vowed to help shield his people from globalization, is known to invite citizens to his modest cottage in the capital, where he listens to their problems and fears.