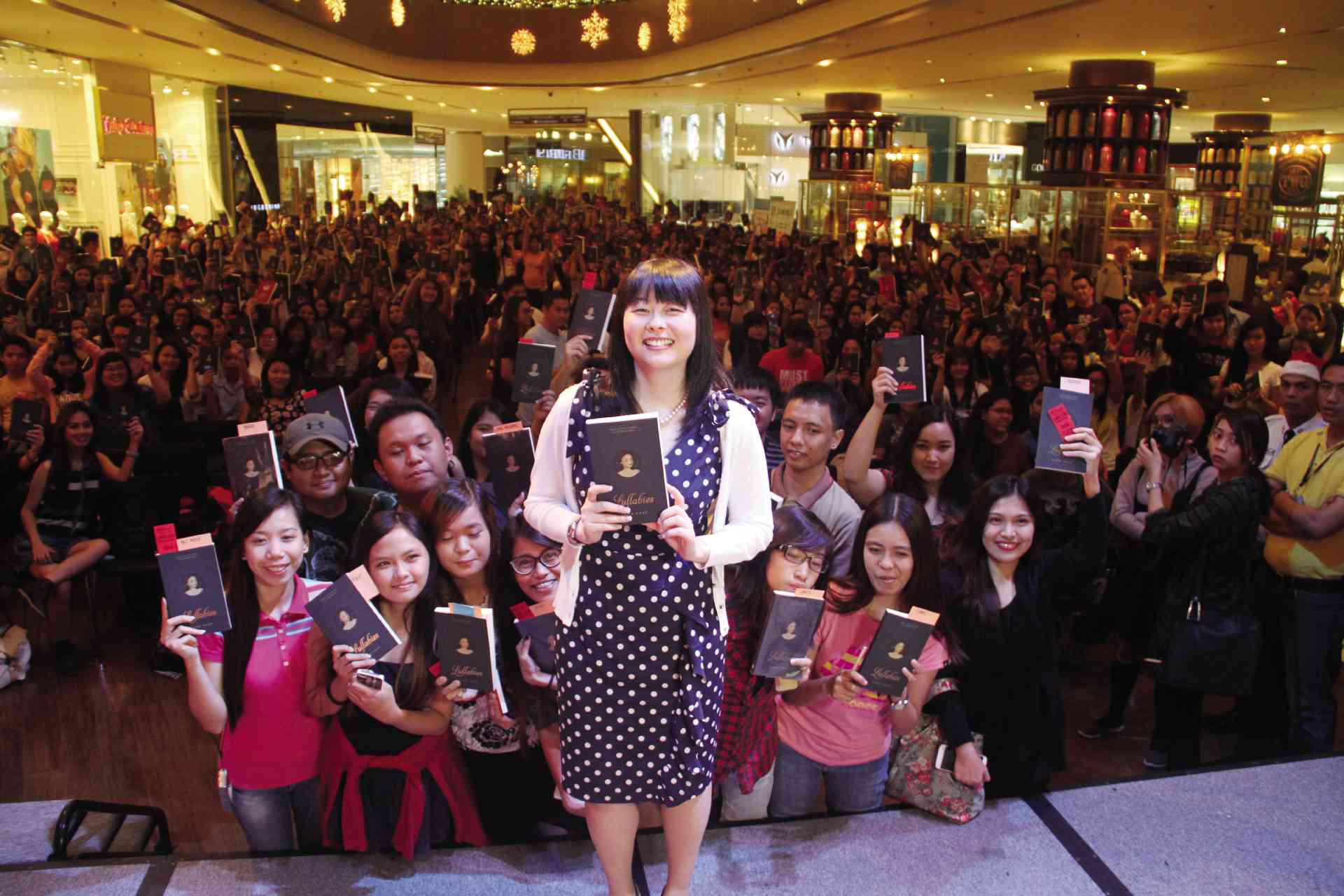 We walked into Raffles Makati’s Writers Bar to find Lang Leav seated at a quiet little corner table, huddling with a girl in a red beanie. Spotting us, they said their goodbyes.

As Lang sat down at our table for an interview, she said, almost giddily, “That was Kylie Padilla.”

The unlikely friendship between the author and the actress started about two weeks ago on Twitter, when Kylie posted a link to an article that listed her favorite books. One of the books was Lang’s bestselling book of poetry and prose, “Love & Misadventure.”

Since then, the two have been exchanging tweets. And when Lang arrived in the country last week for National Book Store-sponsored tour to promote her new book “Lullabies,” she sent Kylie a message.

Kylie said, in a phone interview with Super, “Lang asked, ‘Are you free on Thursday?’” and I said, ‘I’ll make time!’ It was very overwhelming and I was so excited and nervous! She’s just as inspiring as her books so I’m really happy that I got to meet her. She’s really nice and down-to-earth.”

Lang felt the same way. “It was really amazing. Kylie’s so lovely. I was nervous before meeting her because I thought she’s this huge celebrity here. I didn’t know what to expect, but she is such a lovely person, a wonderful soul. We had so much to talk about.”

The two share a passion for poetry. Kylie said, “I really love poetry, I also write. But whenever I read Lang it’s like she’s speaking from my heart. The things that my heart can’t say, she’s putting into words.”

Lang’s legion of fans—in the Philippines and the rest of the world—agree. Many of them came out to National Book Store’s events—at the East Atrium of Shangri-La Plaza and Powerbooks Greenbelt 4 (the Cebu leg had to be cancelled because of the typhoon)—where they lined up patiently for a chance to listen to their favorite poet read her work and have her sign their books.

Why did you say yes when National Book Store invited you here?

I thought it would be exciting to come back to the Philippines and do another tour. It was a natural thing. It feels wonderful, really lovely to be back.

The last time we spoke, you said you still weren’t sure how big your fan base here was. Are you more aware now?

Yeah. It’s gotten pretty crazy. Now I’m being recognized when I’m just out and about. That’s something that’s never happened before. I was going to the bathroom and then this girl followed. She was so sweet. She’s like, “I’m a really big fan. Can we take a photo?”

Your first book was a huge success—did that put any pressure on you as you worked on “Lullabies”?

No, not really. Because I was writing anyway, I was trying to write as much new material as possible so I was writing on a regular basis and I had gotten into the habit. I had enough content for a second book. I knew from social media the reaction to some of the poems that I posted from “Lullabies” that the second book would do well.

Was there a difference in the writing process for you this time?

I think this time the writing has developed, there’s a more mature tone to it than “Love & Misadventure,” it’s less whimsical. I think that’s just a natural progression, me growing as a writer.

Do you feel like your readers are growing up with you?

Yeah. I do get that sense, absolutely. I think two years, when you’re young, can make a huge difference; to go from 19 to 21 is a huge leap.

Do you ever feel the need to edit yourself? Do you sometimes stop and think, wait, that’s too personal?

I write a lot from empathy and imagination, and a lot from my readers sending in their stories. I think that everything I write is quite universal, and that if it applies to me in some way then it would apply to someone else. I don’t have any problem with sharing.

You wrote that you want your readers to experience “Lullabies” the way they want to—whether from start to finish or by reading random pages. Is that how you also enjoy poetry books?

Yes. Absolutely. Because with poetry books, it’s so great that you can just flip to a random page and read something that speaks to you. It’s really strange but when you do that, it always seems as though it applies to your life right there and then. You always seem to flip to the right page at the right moment. It’s magic.

How did you celebrate after finishing “Lulllabies”?

I don’t even remember. Michael and I are so laid-back that we probably just ordered takeout and watched DVDs and that was our celebration. That’s what makes us the happiest.

How does it feel to have won the Goodreads Choice Awards for Poetry?

Really wonderful. I’m so grateful to everyone who voted.

It’s amazing how connected you are to your fans on social media—is that something you consciously do?

I’ve always done that from the beginning. I just love interacting with them, and I think they’ve added so much to my writing. On this tour, I haven’t really been able to go on social media… After the interviews, it’s just straight to bed because I’m so tired. But I do think that it’s an important part of my working process.

When your readers react to something you’ve written, does it affect your writing process?

Absolutely. They influence it. It’s impossible not to be influenced by that sort of stimulation I’m getting from everyone. From all the messages I get, I get a sense of what people want to read and what their stories are.

You have touched a lot of young people with your words. But growing up, who was your Lang?

I wrote a piece in “Lullabies” called “Dead Poets,” and I wrote about Sylvia Plath and Emily Dickinson and Katherine Mansfield. I’ve always looked up to them.

Do you like that you’re reintroducing poetry to a new generation?

Absolutely. I spoke to an owner of a bookshop in Singapore and she said, “What you’re doing is making poetry cool again. Because of you, people are coming in and looking for Emily Dickinson. Or they want to read Shakespeare again.” If my work is a stepping stone for others to want to read other poetry, then that makes me very happy because I think poetry needs more credit. And it’s such a beautiful and expressive form of language.

Apart from being a writer, you’re also an artist, a designer… Do you still get the chance to enjoy your other artistic endeavors, or have you been focusing solely on writing?

I’ve been focusing mainly on writing but I got to do a bit of drawing for “Lullabies” and I really enjoyed that. I had such a great time illustrating.

Are you already working on the next one?

Yeah, I’m working on two books at the moment. One is poetry and prose, and one is a novel which I’m halfway through. I can’t talk too much about it but there will be romance in it. I don’t know if it’s classified as a romance book but it’s about a girl, a protagonist, who does something, and she doesn’t really mean to, but it just goes through that, how that simple thing impacts her life and the life of her friends.

Does it make sense to work on a book of poetry and a novel at the same time?

Initially, I was just going to do the novel. What’s really strange is, while I was writing the novel, while I was writing conversation between my characters, it began inspiring poetry. I’d write poetry about these characters and I’d think, well, this doesn’t really fit into my novel, they’re stand-alone pieces. So, yes, I’ve found that’s what’s happening.

We love how you and your boyfriend Michael Faudet are so supportive of each other. His first book “Dirty Pretty Things” has just come out—have you told him anything to help him prepare for what happens after a book release, or you don’t need to because he’s been there with you the whole time?

He’s been there with me the whole time and he’s worked in advertising for years, so I think he’s a lot more used to that attention. He’s won lots of awards for his advertising, so he’s used to all that adulation. (Laughs)

You are great collaborators, but do you ever get competitive, too?

No, not really. We just support each other. Sometimes he’ll write something and he wants my opinion and then I’ll say, “Why don’t you put this word here?” And he’ll do the same for me. He’s good with titles so I’ll say, “I’m really stuck with this title, what should I call it?” And then we’ll toss ideas back and forth. It’s a really great working relationship.

Do you miss making handmade books? Is that something you would ever do again?

Yes, yes, yes. I wish I had some time. If I could tomorrow, if they said, “You’ve got all the time in the world,” I would sit down and create a handmade book.

You said that poetry comes to you at random times, sometimes when you’re sleeping. What’s the weirdest thing you’ve written your poetry on just to make sure you don’t lose it?

A tissue. I’ve done that before. It’s really hard writing on a tissue, too, because it bleeds. I think I used a felt pen and it rips and it bleeds. But you’ve got to get it down. Sometimes, you know, on a magazine or something that’s just lying around.