Creating for a cause | Lifestyle.INQ ❮ ❯ 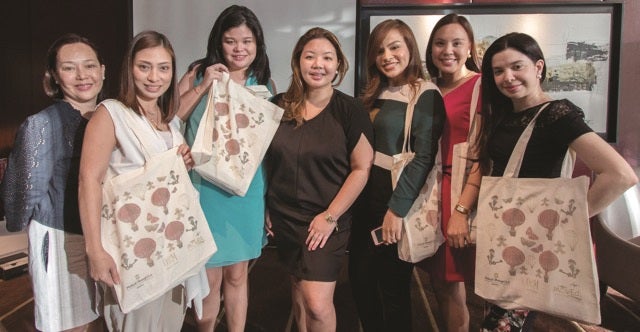 Creating for a cause

Available at the hotel’s reception desk and dining outlets this Christmas season, the tote bag, which measures 14 X 16 inches, costs P500 each. Proceeds from its sale will go to Molding Optimism and Values through Education (MovEd).

Founded by Eduque, the nonprofit organization is an early intervention program that provides funding for young, disadvantaged schoolchildren from poor families in several public schools in Metro Manila and Bicol.

“The P500 donation goes directly to the children to help them catch up,” said Bukay Urra-Lagman, executive director of MovEd, during the tote bag’s launch at Makati Shangri-La. “We hope to raise as much as P100,000 during the entire holiday season.”

“But I have under my own line other products also sold for the benefit of MovEd,” said Morales, who met Eduque, one of Oliver & Maude’s customers, early this year.

To make the effort more personal, Eduque, a graduate of urban studies and political science at Columbia University, did the tote bag’s artwork, which echoes the hotel’s “Timeless Christmas” theme.

Eduque, who has previously collaborated with Morales, is now one of Oliver & Maude’s guest artists.

“I’m not a professional artist,” Eduque said. “I do it only for charity. My first line for Oliver & Maude was composed of doodles.”

This time, she focused on “all aspects of timelessness,” including such images as a red hot-air balloon and green leprechaun.

To underscore the value of time and need to stimulate young minds, Eduque included smaller but more obvious symbols such as clocks, gears and keys to her artwork.

“Once a hot-air balloon floats, its lightness reminds me of our need and desire to dream big,” she said. “It’s okay to dream big. A leprechaun, for me, conveys timelessness because it’s born old and remains that way.”

She also threw butterflies into the mix to denote change. The artwork, which she originally rendered on paper using watercolor and gold ink, has a faded quality that lends a vintage, nostalgic feel.

Dabbling in art and immersing herself in community work are nothing new to the 24-year-old Eduque. She was 15 when she started helping build houses as a Habitat for Humanity volunteer.

She remained connected with Habitat even while studying in New York.

Her interest in the visual arts started a little earlier in high school. “I never had formal training,” Eduque said, “just high school and college art classes. It never entered my mind to make a career out of it. My family has never been known to excel in the arts.”

But if there’s one thing she imbibed from her parents, it’s their involvement in causes that are dear to their hearts. In fact, part of the reason she took up urban studies was to prepare herself in establishing a foundation.

But she didn’t want to put up a foundation without knowing the community she was going to be involved in. “I wanted to know the big picture about the country’s socioeconomic situation,” she pointed out.

Her mother would probably be the last person to encourage her to pursue a full-time career in the arts, but she probably wouldn’t object either, should Eduque pursue it.

“I don’t believe you simply do something out of fun or for the money,” Eduque said. “Everything you do should also involve the heart. My heart should be into where my values could align.”

Apart from her belief in the value of education, Eduque also loves dealing with kids. Such an affinity with children has made her involvement with MovEd all the more meaningful.

“There’s a sense of innocence and naivete that a child has, which reminds me of the purity human beings should all have,” she said.

Admittedly, there’s also pressure on her and younger sister Mikaela, 21, to live up to their illustrious family names.

“People think just because you were born with a silver spoon in your mouth, everything comes easy,” said Eduque. “In fact, the pressure is greater because you’re already born into an established lifestyle… into a pool of expectations and there’s simply no room for you to disappoint.”

With privilege comes responsibility. Her parents, who lead by example, make it easier for Eduque to handle the pressure.

“Perhaps if I saw them as lazy, I would resent or rebel under so much expectations,” she said. “But when your parents really practice what they preach, then you know no other way of doing things. They set the standard.”