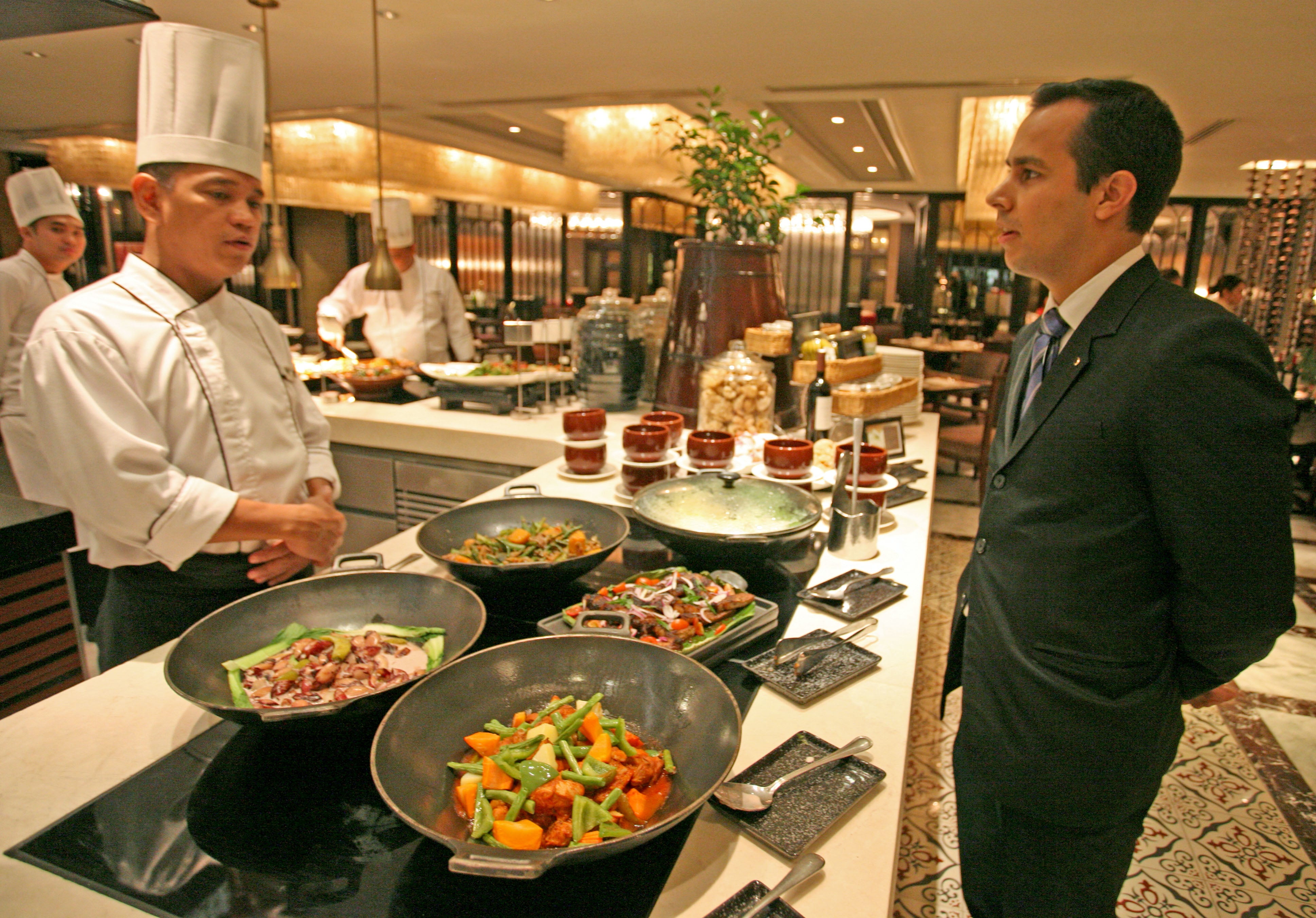 Restaurant manager Tanguy Gras oversees the dishes at an atelier

No typhoon can stop a determined diner.

When “Ruby” struck last weekend, we thought it would be slack hours and a lazy Sunday brunch at Spiral restaurant in Sofitel Philippine Plaza at the CCP Complex, since it was on Roxas Boulevard and people might get discouraged to eat out for fear of storm surges.

As it turned out, diners were flocking half an hour before Spiral’s 21 food ateliers opened, and this despite the P4,200+ tag on the buffet. This was the first in a series of special Sunday brunches (12 noon-3 p.m.) the restaurant is offering for the holidays.

“Gastronomy and wine are pillars of Sofitel,” says Tanguy Gras, who manages the luxury hotel’s dining outlets. “For the holidays, we highlight festive food, like special cheeses, premium wines, the turkey”—of which Spiral has a decadent version, the big bird stuffed with duck which is in turn stuffed with chicken and foie gras.

Spiral, a concept restaurant with 452 indoor and outdoor seating capacity, aims to “bring the authenticity and warmth of the traditional French markets and Asian hawker stalls into a five-star hotel setting.” The dishes are prepared by 60-80 chefs. The result is an astonishing mix of world cuisines a diner would run out of breath just to navigate.

This concept of a series of dining ateliers and cooking stations is “something really unique,” says Gras. It has earned Sofitel’s flagship restaurant a reputation as one of the most dynamic interactive-dining destinations in Asia-Pacific.

“Friends from France who visited me—some also in the restaurant business—were amazed,” says Gras. “They found it only here in Manila. Our biggest come-on is the sheer variety in the choices of food. We serve over 300 dishes every meal, and there’s a chef for every section. Our success is in that you see the food being prepared, as it happens—you call that à la minute. People come here not only to eat but also to be entertained.”

Gras’ favorites from the ateliers include the Fine de Claire oysters, cultured on the French Atlantic coast, small but fleshy and juicy, crisp, slightly nutty, and balanced in saltiness, which he recommends best eaten raw with vinegar or lemon and shallot; the Vietnamese noodle soup; and the Singaporean chili crab, a signature dish.

In his two-and-a-half-year stay in the country, has he taken to rice? “I have no problem with that,” he smilingly says. “My mother is from La Reunion, a French island near Madagascar.”

Does Spiral also offer exotic food to diners? “I just had mangosteen at breakfast,” he says. Balut? “Sometimes, for special occasions. I like it, actually.”

But nothing like crisp-fried scorpion, wormy cheese or kangaroo steak. Arguelles says they regularly hold meetings and briefings for consensus on what’s to be included on the menu, and to consider how many complaints they get.

Because an innocent dish like dinuguan (blood stew) may turn off some Spiral diners, of which she estimates 30-40 percent are foreigners or expats, mostly British and Europeans, with the Filipino-Chinese comprising the bulk overall. Even if the balut (duck embryo) has been turned into a soufflé, they still have to determine: Does it sell?

“Our diners are really open-minded,” says Gras. “Filipinos are easy to please.”

Arguelles, who had worked for seven years in Singapore before returning to the country to take charge of the menus for Sofitel’s various dining outlets, says the level and standard of diners is higher in Singapore as it is more cosmopolitan and has a lot of expats.

“They’re very particular with the quality of ingredients, the temperature of the food,” she says. “Their level [of cuisine appreciation] is elevated already as in New York, because they have a lot of celebrity chefs.

“But in terms of service, we are better. I think we’re already catching up, due to the popularity of these [culinary] TV shows. We’re now open to different cuisines. There’s a boom in the food industry. I’m surprised by the spending power here. Spiral is always full.”

Arguelles oversees over 200 chefs during the Christmas season, banquets and events. She’s particular with the cycles in the menu and sees to the regular coordination of the atelier chefs.

“Para hindi sabay [the foods for the day],” she explains. “Hindi puwede na lahat seafood. And there should be no similarities, as with Filipino and Chinese noodles, or the chop suey [with all its variants].”

She’s especially proud of the French ateliers. “French culture is part of the DNA of the [Sofitel] organization,” she says.

La Patisserie and Chocolaterie, with their extravagant arrays of sweets and pastries, evoke the salons de thés à Paris.

Here also is prepared the similarly noble coq au vin, chicken slow-cooked in red wine and butter, tomato, garlic, herbs, mushroom, carrot, bacon. It is a four-day process of alternating steps of simmering and airing. It is served only at Le Bar on the hotel lobby.

Foie gras is served in slivers on chutney or risotto in a delicate shortcrust pastry, for guests to have a different experience of flavor profiles, says Arguelles.

L’Épicerie is a little store carrying cheeses and charcuterie from France, Italy, Germany and Switzerland. It is also called The Cheese Room as it is more reputed for its artisanal cheeses.

“Even foreigners get awestruck when they see it,” she says. “I think this is the only one of its kind in Asia. It is heavy on French cheeses. They’re not produced in bulk. They really come from the farmers. So you get respect for each cheese, its history, where it comes from, the story of the cheese-maker.”

The Wine Cellar stocks on premium French champagnes as well as wines from Spain, Italy, Chile, Australia, France. Champagnes and sparkling wines, plus cocktails, beverages and cognac, are served at Sunday brunch till 2 p.m.

Arguelles also recommends the teppanyaki and the Indian dishes, among her personal favorites.