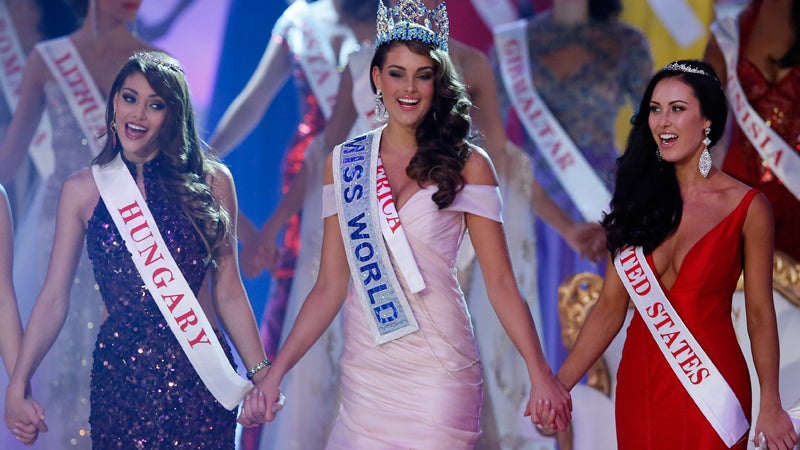 London–Miss South Africa, 22-year-old Rolene Strauss, was crowned Miss World 2014 at the pageant’s final in London on Sunday, with an estimated billion viewers watching on television around the globe.

The medical student clasped her hands together in surprise and was crowned by the outgoing Miss World, Megan Young of the Philippines, before a fireworks finale.

“South Africa this is for you,” Strauss said afterwards. “I think I will brace myself for what’s about to happen. It’s a huge responsibility.”

This year’s event has been rocked by the murder of Miss Honduras, 19-year-old Maria Jose Alvarado, who was shot dead along with her sister last month.

Their bodies were found on the day the beauty queen was due to travel to London.

Police in Honduras accuse her sister’s boyfriend of shooting them after seeing his partner dancing with another man at a party.

Strauss will travel to the violence-hit central American nation to build a school named in the sisters’ honor.

Sunday’s show started with a spectacular choreographed dance routine, with all the contestants shimmering on stage in costumes inspired by their homelands, including Miss Bolivia in a colorful giant feathered headdress.

While beauty remains central to the event, the women taking part are also judged on their brains, skills and involvement in good causes.

In the Beauty with a Purpose round, contestants present a charitable project they have been working on in their homeland.

The 41-year-old Indian actress appeared on stage with her film star husband Abhishek Bachchan, their daughter Aaradhya and her mother.

The prize was for the “Dhoom 2” star’s charitable work since being rocketed to fame by Miss World.

They were joined by Miss Thailand, who won the people’s choice award, voted for by people around the world through a mobile phone app.

Ahead of the pageant at the ExCel center, feminist protesters against it rallied support on Twitter under the hashtag #missworldoldworldmisogyny.

“The sexist idea that women should be judged on the basis of their appearance influences the way that all of us feel about ourselves as women and the way that men view and treat women,” one of the groups backing the protest, the London Feminist Network, argued on its website.

Miss World began in 1951, a year before its chief rival Miss Universe.

As well as Rai, previous finalists include US actress Halle Berry in 1986.

It returns to Bali in Indonesia for the 2015 final.–Robin Millard