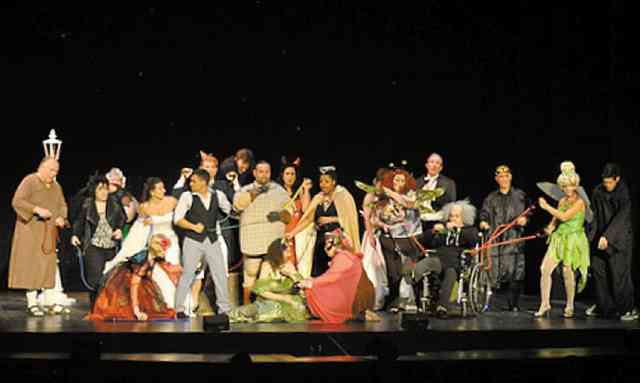 Operas, musicals and a state-of-the-art venue

The play focused on Mabini’s last year in exile in Guam and his bittersweet return to the Philippines. Highlights were a rambunctious all-male production number and the confrontation between Mabini (Roeder Camañag) and a smooth-taking Governor-General Taft (Leo Rialp).

Camañag’s Mabini was almost upstaged by an intransigent, blustering Gen. Ricarte (Poppert Bernades) but he played against type, gave a consistent, convincing performance as the disillusioned hero and was given a standing ovation. The ending was a stunning promenade scene, approximating a stroll at Luneta, the players dressed elegantly, as Mabini finally returned to his country.

For 2015 we will have Puccini’s “La Boheme” on Jan.13; Massenet’s “Werther,” based on a novella by Goethe (“The Sorrows of Young Werther”) about—spoiler alert—a youth who commits suicide out of love, Feb. 10; and “The Enchanted Island” by Handel-Vivaldi- Rameau, March 16.

The shows are long but fascinating. You feel like you’re in the front row of the New York Met. Better, in fact, because during the intervals the stars are interviewed behind the scenes and the camera roves backstage, and the viewer sees at close range the intricate preparations for the next act.

By the way, tickets are priced above the usual—P400 (P320 for seniors). And, what do you know, the theater is always filled to capacity, so get your tickets early.

Roeder Camañag is on a roll. Right after appearing as Mabini in “Ang Huling Lagda…” he went over to the AFP Theater in Camp Aguinaldo to give a felt portrayal as the menacing jeweler Don Simoun (and as Mr. Leeds!) in Gantimpala Theater’s “El Filibusterismo,” and with the ensemble breathing new life to Rizal’s familiar tale of vengeance, morality and a thwarted revolt.

Ballet Manila has done it again, bringing together top-caliber international artists to star in a beloved ballet: Ukraine-born Katharina Markovskaja and Russian-born Chaschegorov, principal dancers of the Bavarian State Ballet, who wowed audiences as Odette/Odile and as Prince Siegfried, respectively, in the evergreen “Swan Lake.”

The opening of The Theater at Solaire in Parañaque City, the latest high-end venue for performances in Metro Manila, was a grand affair, with Gerard Salonga at the podium conducting the ABS-CBN Orchestra. Giving their all was a galaxy of top stars from the opera, ballet, musical theater and showbiz firmament. But the real star of the night was Constellation, a state-of-the-art acoustics system which heightens the viewing and listening pleasure of the audience.

Our singing ambassador-at-large, tenor Rogelio Peñaverde Jr., based in the Big Apple, has been singing lead roles in operas and operetta while promoting Philippine music. He has appeared as Fenton in Verdi’s “Falstaff and as Don Filipo in National Artist Felipe P. de Leon’s “Noli Me Tangere” at the Kennedy Center in Washington DC. He has done solo concerts in New York, and has produced Vivaldi’s “Gloria” with the San Lorenzo Ruiz and Kayumanggi Chorales of New York.