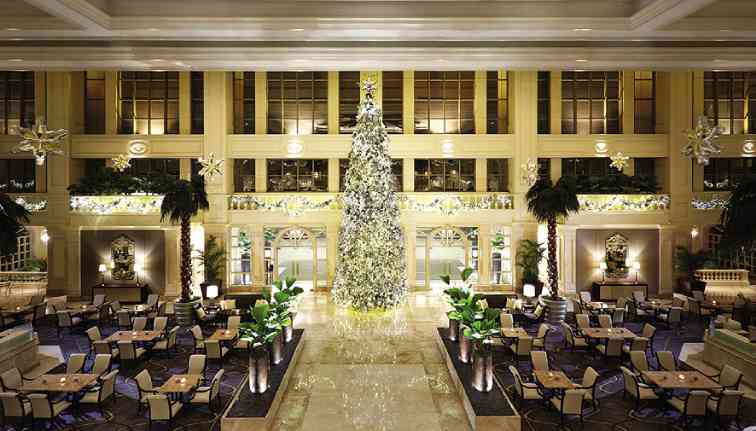 Hotels outdo each other, décor-wise

Hotels outdo each other, décor-wise

With Christmas just over a week away, and if you’re in a design rut and don’t know what to do with the Christmas décor you and your family have amassed through the years, consider checking out the different hotels in the city for ideas.

Luxury hotels and resorts usually choose a theme months in advance and stick to it, resulting in stunning tableaux and vignettes throughout the property.

The look is cohesive, yet each decorated corner can stand individually.

You do not have to buy decorations yearly. All you need is a fresh perspective and an openness to experiment with colors and accents.

This list of hotels is far from complete but it’s enough to make us look forward to next year’s decorations.

The Peninsula Manila chose a green-and-white motif and enhanced it with cut glass, crystals and mirrored surfaces. Since the hotel chain opened its first European property in Paris this year, it decided to celebrate this milestone by choosing a French theme.

“One of the most famous Christmas festivals in France is Lyon’s Fete des Lumieres (Festival of Lights) where for four days buildings, parks, squares and streets are lit up by different artists. That was our inspiration for our Crystal Christmas theme,” said Mariano Garchitorena, the hotel’s director of communications.

The Sofitel Philippine Plaza in Manila has also chosen a French theme. At the lobby is a replica of the Eiffel Tower dotted with fairy lights. Christmas shops line the lobby selling sweets, mulled wine, small wooden toys and Christmas décor of export quality.

Many hotels have Christmas trees and wreaths as major décor. Fairmont Hotel and Raffles Suites and Residences, imported pine trees from the US, and so did Sofitel.

The smell of fresh pine greets you. The trees were trimmed with red and gold balls, like at Fairmont, or predominantly white ornaments (Raffles). To continue this theme of “freshness,” masses of red and ivory potted poinsettias dot the hotels’ halls and public spaces.

Dusit Thani Manila tapped florist Robert Blancaflor who stuck to a palette of vivid green garlands with a combination of matte and shiny gold balls. Touches of white came from the large pillar candles perched on candelabras.

Blancaflor used swags of green garlands trailing down tables and on the shiny floor, making the Dusit lobby all the more dramatic.

I was particularly charmed by the intergalactic theme at New World Hotel Makati. Even before you walk into the lobby, you are greeted at the driveway by oversized star tetrahedrons made of capiz shell.

Inside, three towering metal trees are festooned with more star-shaped ornaments made of twisted wire or capiz. Completing the look are mirrored pieces and textured Christmas balls in gold and white. The base of each tree is ringed with potted ivory colored poinsettias.