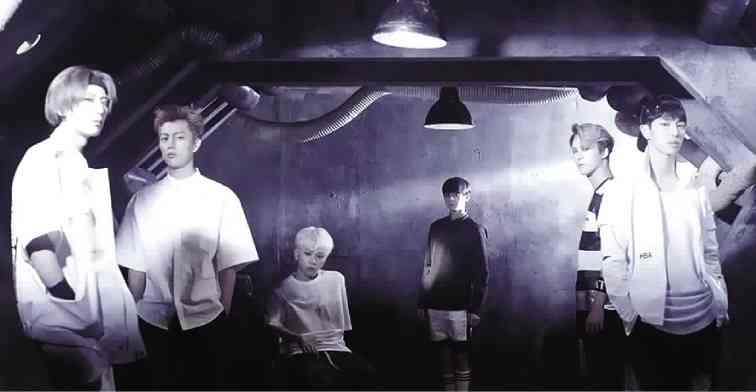 BEAST strikes amean pose in the opening of the music video for “Good Luck.”

Haunting melody, trippy electronic dance music (EDM), and the ever-improving vocal dynamics between members of the band have been cited by Billboard magazine in naming Korean-Pop (K-Pop) idol band Beast’s “Good Luck” as No. 1 on the US music magazine’s annual Top 20 K-Pop songs.

Also in an interview, Billboard calls Beast, which marked its fifth year in 2014, “one of the most consistent male acts in K-Pop today.”

“Emotional piano lines and heartfelt croons evolve into fierce kiss-off lyrics over fizzy electronic production,” Billboard writes. “Meanwhile, ominous cellos, sneering violins and other orchestral elements creep in before they’re trounced by throbbing EDM and trap beat as the guys showcase their singing, belting and rapping skills. There isn’t much more you could ask [for]—or that could fit—in this meticulously put-together tour de force.”

When the record was released last June, Billboard noted its pairing of EDM and classical music.

“The most striking part about ‘Good Luck’ is its production that pairs classical music elements like dramatic, orchestral strings and piano melodies with soaring synths and fizzy electronic pops,” Billboard said.

Placing second and third on the Billboard 2014 list are “Sogyeokdong” by Seo Taiji and IU and “Good Boy” by G-Dragon & Taeyang, respectively.

The inclusion of “Good Boy” instead of Taeyang’s solo effort, “Eyes Nose Lips,” surprised many as the latter record by the Big Bang member was a bigger hit than his pairing with G-Dragon, also of Big Bang.

Beast is no stranger to the Billboard annual listing, having made it to the list before with “Beautiful Night” in 2012, when the listing started, and for “Shadow” in 2013.

A year before the listing began, Beast released “Fiction,” which won commercial and critical acclaim. The record is widely considered the top record of 2011 and one of the most anthemic K-Pop songs in history.

Despite having a successful run in the past years, Beast may consider 2014 as a banner year, especially since it saw its fifth anniversary since debuting in 2009.

Last July, it released its mini-album, “Good Luck,” to roaring acclaim by critics. It topped the charts and won 10 No. 1 trophies on TV music shows.

Ahead of the release of the carrier single, the Beast ballad “No More” with its beautiful music video playing around Beastagram and the social-media phenomenon, got a No. 1 trophy from a major music show.

Last October, to mark its fifth anniversary, the band released a second mini-album, “Time,” of which the carrier single “12:30” was an unconventional ballad.

All of the album’s six tunes landed on the Top 10 of music charts on the first day of release, and “12:30” later won eight No. 1 trophies.

In a review, Billboard noted how in its latest track, Beast “mixed classical musical elements into their EDM beats” as in “Good Luck.”

“But ‘12:30’ also brings an unexpected sonic surprise with its dubstep-y electronic blips and bloops infused into the string-led chorus.”

“If anything,” Billboard added, “Beast’s latest seems to prove that the boy band is just beginning to really get creative with [its] music—particularly exciting as Beast is one of the few acts to write and compose [its] material.”

Also in 2014, Beast released a string of Japanese records that were critical and commercial hits: “Sad Movie,” another innovative tune from Yong Junhyung”; “Adrenaline,” “Kimi Wa Dou?” (How About You?), and the very heartfelt ballad, “More than You Think.”

Despite its consistent success, Beast remains an underrated band. In 2011 when “Fiction” was widely considered the year’s top record, Mama nominated it only for the Best Dance Group award.

Beast won, but it’s the only award it has gotten thus far from Mama.

Many observers have noted Mama gives its major awards only to talents of top entertainment agencies. Beast belongs to a relatively new and maverick agency, Cube.

This year, Beast got Mama nominations for Artist of the Year, Best Album and Best Male Group, but won nothing.

But its steady, even widening fan base in Korea and its growing international renown—as well as the Billboard top listing—should provide Beast some consolation.

As Billboard predicts, going by the group’s dominance in 2014, the idol band is set to “create bigger and better productions, undoubtedly a trend that will continue as Beast moves into the second half of their first decade together stronger than ever.”