5 things you might have not known about Doraemon | Inquirer Lifestyle ❮ ❯ 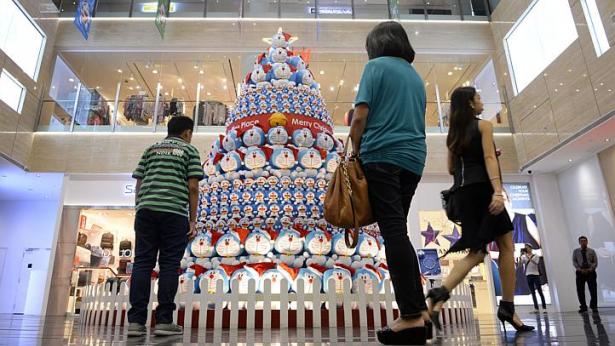 SINGAPORE – Doraemon, the plumped-face blue cat robot from the future, is a beloved manga character many of us grew up with.

We all know how most of the series’ stories go: The lazy and weak-minded Nobita Nobi begs Doraemon for a gadget to rescue him from a sticky situation. But almost inevitably, Nobi finds a way to take things too far and gets into even more trouble. The story usually ends on a happy note, and comes with a subtle moral lesson.

Forty-five years after the character first appeared, he continues to be popular. This month, Straits Times readers voted a Doraemon Christmas tree as their favorite tree in a shopping mall, and a new 3D movie is out in the theaters.

Here are some facts about the resourceful cat you may not have known:

1. What does Doraemon mean?

“Dora” is a play on words. It can mean “stray” in Japanese, and has connotations of being unwanted. It also means “gong”, a reference to Doraemon’s round body, and his favourite food, dorayaki (sweet Japaneses pancakes with a red bean filling).

“Emon” is an archaic suffix for male names.

2. When was Doraemon made?

Unlike Hello Kitty, Doraemon is definitely a cat, but why doesn’t he have ears?

The robot came with cat ears and was painted yellow when it was first manufactured at the factory on Sept 3, 2112, and his production code was MS-903.

The movie 2112: The Birth Of Doraemon (1995) gives a detailed history of his genesis, and his troubles as a defective robot.

In a nutshell, robot mice ate his ears, giving him a phobia of rodents. Sad and tramautised from the ordeal, he sobbed until he turned blue. His voice also turned hoarse from all the weeping.

3. How did Doraemon end up in the present?

He was sent back in time by his owner Sewashi Nobi to help his bumbling grandfather Nobita, who had burdened his descendents with debt due to his bad choices.

In a famous scene from the original manga, which debuted in 1969, the robot appears out of Nobita’s desk drawer.

4. Are there Doraemon gadgets in real life?

An estimated 4,500 gadgets have made their appearance in the thousands of comic books, cartoons and movies based on Doraemon.

While the Anywhere Door, which lets the user travel to any location he or she wants is still out of reach, there was an exhibition in 2010 which showed how modern technology could approximate the marvels that come out of Doraemon’s yogigen-pocket (four dimensional pocket).

They included an invisibility cloak that allows the wearer to become transparent, medical micro robots, and a brain-wave sensor that is reminiscent of Dream TV that the cat used to view others’ dreams.

One gadget that is a reality today is the 3D printer, which appeared in one episode of the comic as a “Mecha-maker”.

5. Who is Doraemon’s creator?

Doraemon is the creation of Hiroshi Fujimoto and Motoo Abiko. The duo were known by their pen name Fujiko Fujio. They drew many manga together from 1951 till 1987 when they split.

The idea for Doraemon came about from a trio of incidents that happened to Fujimoto: He had tripped over his daughter’s toy; he heard a neighbourhood cat fight; and he had been wishing for a machine to help him come up with a new manga concept, according to various accounts.