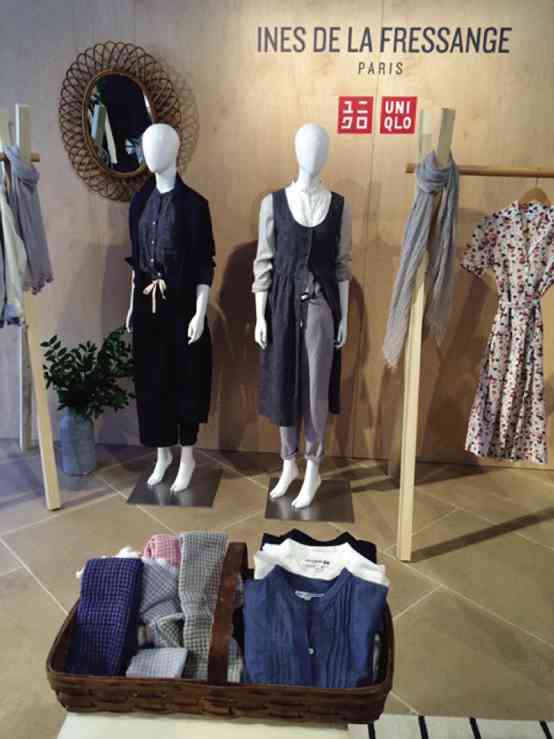 While De la Fressange’s primary source of inspiration was Paris for her first two collections for Uniqlo, this time she channels moods and themes closer to home.

Born and raised in southern France, De la Fressange has produced a spring-summer collection of cotton and chambray dresses and separates in neutral prints and solid shades of blue, beige and gray, said to evoke the look and feel of her native region.

The limited-edition line will be available the world over, including Uniqlo stores in the Philippines, as early as the third week of February.

“Ines and I are like brother and sister,” said Naoki Takizawa, design director of Uniqlo Co. Ltd., and the man responsible for convincing De la Fressange to join the brand. “I’ve known her since I became a designer. She was already the muse of Chanel, while I was working with Issey Miyake.”

It’s important for Uniqlo to work not only with someone with an innate sense of style. Since the brand is beefing up its women’s line, she should also know how to flatter a woman’s body and what works for her busy lifestyle.

“It’s a plus that Ines knew Uniqlo and wore some of our clothes even before we asked her to collaborate with us,” Takizawa added. “What you see in her even in private is a reflection of her lifestyle. And since Ines is also a designer, she’s a total package.”

In keeping with Uniqlo’s holiday theme to “Give Color,” the event’s organizers also went to town showcasing the brand’s best-selling and packable ultra-light down (ULD) nylon jackets, coats and vests in a variety of colors and styles, including an extensive range of options for women and children.

Japanese designer Nigo, the creative director behind Uniqlo’s popular T-shirt line dubbed as UT, also showcased some of his best and most iconic designs, including collaborations with Disney and other designers and artists.

artworks of some of MoMA’s featured artists, particularly mainstays such as Andy Warhol, Keith Haring and Jean-Michel Basquiat, resulted in a separate line of T-shirts, ULD jackets and accessories like canvas totes, scarves, beanies and socks under the SPRZ (pronounced as surprise) NY line.

Uniqlo’s desire to integrate art into various aspects of daily life jives with MoMA’s thrust to promote art beyond the confines of its 53rd Street museum. It also helps that the two establishments are next-door neighbors in midtown Manhattan.

The partnership plans to unveil the reinterpreted works of other artists such as Alexander Rodchenko, Anni Albers and Jennifer Bartlett in the coming months. So far, Uniqlo’s SPRZ line in the Philippines is limited to T-shirts and certain accessories.

The partnership has gone beyond the SPRZ line to include Uniqlo Free Friday Night, a program funded by Uniqlo that allows visitors free entrance to MoMA every Friday from 4-8 p.m.

An average of 7,400 weekly visitors to MoMA avail of the free offer. The best part is they don’t have to buy anything from Uniqlo to get in.

From the moment we met with Uniqlo officials in Manila up to the time we entered its three-level, 8,300-sq m flagship store at the corner of 5th Avenue and 53rd Street in Manhattan (Uniqlo’s biggest store to date), we’ve been repeatedly told in many ways what the brand isn’t.

Unlike some of its equally visible rivals, Uniqlo isn’t a fast-fashion brand. Instead of churning out new looks every week, it produces smart looking but low-key pieces per season— from outerwear to underwear—that can be mixed and matched and worn again, say, next winter.

in Tokyo decades to perfect.

“The way they’re structured, fast-fashion companies think more about collections and outfits,” said Swedish Jorgen Andersson, group officer of Fast Retailing Co., Ltd., and a former manager of one of the world’s biggest fast-fashion brands based in Stockholm.

Certain categories such as jeans and tops are further segmented based on quality and price. Yes, not all pairs of Uniqlo jeans are created equal.

“I was drawn to the brand because I find its approach much more modern,” Andersson said. “By putting quality pieces together, fashion is created by the consumer and not so much by the designer and the brand.”

Patented technologies such as Airism, Heattech and ULD have also become part of the Uniqlo shopper’s lexicon.

These technologies have also become essential to the brand. Without these concrete advances, such marketing catchphrases as “LifeWear” and “Made for All” would be meaningless.

There may be subtle changes in styles and the introduction of new details to keep the public interested, but Uniqlo’s main focus to provide its customers with basic items that respond to their needs regardless of their age, background and fashion sense has remained basically unchanged since the brand’s inception.

“I always make a joke,” said Katsuta, group SVP of Fast Retailing Co., Ltd., and head of R&D of Uniqlo Co. Ltd. “Everybody loves to refer to us as a fast-fashion brand. Actually, we’re kind of slow. If we are to make a really good fabric, it usually takes us a couple of years.”

The bulk of its design team is still based in Tokyo, but smaller design teams are based in Los Angeles, Shanghai and New York, making it a truly multinational brand in tune with the global zeitgeist.

Unknown to many, the 30-year-old company founded by Tadashi Yanai, president and chair of Fast Retailing Co. Ltd., confined itself to men’s clothes during its first 15 years.

When Uniqlo finally decided to venture into women’s wear, the brand at first struggled to find its footing, said Katsuta.

But since Nealz, an American and industry veteran who once worked with some of the biggest clothing brands in Europe and North America, joined Uniqlo more than a year ago, the brand’s women’s wear line has gone from strength to strength.

Collaborations with De la Fressange and other designers finally enabled Uniqlo to secure a place in the hearts and closets of a growing number of women the world over.

In fact, it’s difficult to imagine that Uniqlo used to exclusively cater to men, as its 5th Avenue store (one of three outlets in New York City) devotes bigger floor space to women’s items.

“As you can see, we’ve introduced a range of choices for women based not only on colors, but also on details,” said Katsuta. “Finally, we could introduce lines that are more feminine from hereon.”

Apart from the challenge of doing clothes that appeal to a global market, Nealz and her colleagues must also produce pieces that are timeless—the complete opposite of what fast-fashion brands are in business for.

“One of our goals is to produce easy pieces that you can style up or down, depending on what you want and your personality,” she said.

Like Andersson, Nealz, after working for some of the biggest fast-fashion brands in the world, was also drawn to Uniqlo because of its modern, no-frills approach in appealing to customers.

“The clothes are simple and there’s a kind of practicality about them,” she said. “I also share in Uniqlo’s thrust of putting importance to fabrics and fit. My job, apart from giving women’s wear a more feminine perspective, is to tap into the true essence of Uniqlo pieces and expand on that.”

If global domination can be equated to finding at least one Uniqlo item in every person’s closet the world over, then the brand, at the rate it’s been expanding globally and introducing new forms of clothing technology, is pretty much on its way to achieving its goal.