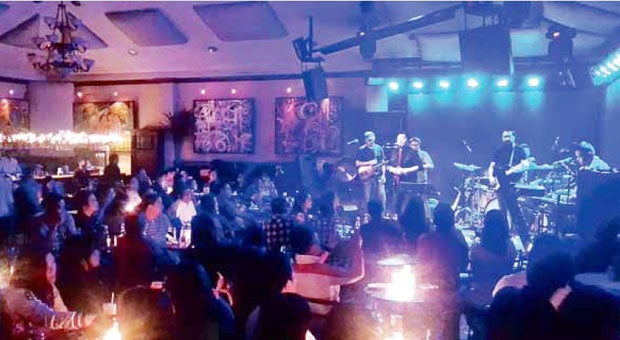 In 2014, the iPhone got bigger. It’s also the year when both the biggest nightclub in Asia and the biggest indoor arena in the world opened in the Philippines.

It’s the year when many Filipinos spent money and time on their “night life.” The most visible proof: full-packed clubs and bars in Metro Manila and its environs on most days of the week.

It’s very much apparent in Quezon City, Makati City, Parañaque City and especially in an area that was once part of a military camp, Fort Bonifacio, now known as Bonifacio Global City (BGC) in Taguig.

The vibrancy of night life in these parts is due to “the emergence of newer and better venues, an improved economy and a [burgeoning] middle class,” says Louie Ysmael, who owns, with several business partners, at least five clubs in BGC, including Valkyrie at The Palace—said to be the biggest nightclub in Asia, with a seating capacity of 2,000.

Ysmael—regarded as Manila’s night life king when he opened Louie Y’s, Stargazer and Euphoria in the 1970s and 1980s, and later Venezia, V-Bar and Nuvo—has teamed up with a younger set of entrepreneurs in running Republiq, Universe, Privé, Aracama, 71 Gramercy and the newly opened Valkyrie.

These are not the usual “dance clubs,” Ysmael tells the Inquirer.

“The clubs we now own are actually large clubs that don’t have dance floors when they are open on a regular basis. Unless Privé, Valkyrie at The Palace or 71 Gramercy are closed for a private function, where dancing will be part of the party, the so-called dance floor is filled with sofas or standing cocktail tables. People in general just dance or move and sway in place, unlike the disco days and before that, when dancing was de rigueur or obligatory,” he says.

Valkyrie, he adds, “has been doing very well, beyond expectations.”

He says his group is opening a “day club” next to Valkyrie, which is just one of six establishments rising in The Palace, a dining, drinking and leisure complex located in Uptown Bonifacio, BGC.

The people who go to his clubs, Ysmael says, “range in age from 18 to their 50s, from the A and B social classes.”

“They are mostly college students, young professionals, celebrities, socialites, models and the occasional politicians. This has been and will probably always be our market,” he says.

Strumm’s on Jupiter Street, Makati, has been successfully operating for the past two decades, with live acts performing Mondays to Saturdays, offering a mixture of pop, rock and jazz covers and originals.

On a recent Tuesday night, during Strumm’s 22nd anniversary, a group of musicians from the Brat Pack and Ian Lofamia Band jammed on blues classics, mesmerized a full-house audience, including businessmen and office workers sitting side by side with magnate Tonyboy Cojuangco, Strumm’s owner Mari Lagdameo and Ysmael himself.

The ’70s Bistro on Anonas Street, Project 2, Quezon City, opened in 1993 by a group of University of the Philippines graduates and social workers primarily as a folk music bar, has weathered changing music trends and continues to attract a regular crowd of professionals and students with its roster of live acts that include veteran rock bands Parokya ni Edgar and Sandwich, as well as young singer-songwriters such as Kai Honasan.

Another longtime music venue, 19 East, on Kilometer 19 East Service Road near the boundary of Parañaque and Muntinlupa, enjoys a loyal clientele who make it a point to watch its gigs

On a Monday night, for instance, the tables were full as pop-R&B band South Border alternated with a jazz act, Akasha, led by drummer Mar Dizon with saxophonist Michael Guevarra, bassist Dave Harder and two musician friends jamming—keyboardist and 19 East owner Wowee Posadas and London-based guitarist Robin Aristorenas, who is home for the holidays.

Posadas, who has expanded his facilities with a second floor for dining and drinking outside the main club, which is nestled in an airy, hilltop garden, believes that the success of 19 East lies in the consistency of established bands and the emergence of new and talented artists.

“My daughter celebrated her birthday here,” Posadas says, “and I invited a band to perform. But my daughter wanted a DJ instead …. I’m worried that, unless a band as good as the Eraserheads comes along, the scene might change,” he says.

In any case, Ysmael thinks it’s good to have young partners for synergy. “They have refreshing and dynamic energy, new ideas and concepts, and a vast network of young partygoers,” he says. “I contribute my name, experience and my own following, which I have developed all these years. It works really well.”

As to whether he and his business associates are making projections on the longevity of their clubs, Ysmael says: “All clubs have a life span, some longer than others …. Universe is a rebirth of Republiq at the old Opus venue and I believe it has been doing quite well. It caters to a younger market.”

He is also optimistic that the Filipinos’ preference for going out with friends will keep them coming to his clubs and others as a lifestyle. “If anybody knows how to party in Asia, it’s the Filipino,” he says.

The Philippine Arena—said to be the biggest of its kind in the whole world, with a seating capacity of 55,000—is presenting American hip hop-R&B artist Chris Brown along with the Philippines’ top rock singer Bamboo and other local acts in a New Year countdown concert on Dec. 31.

The question is, will people come to fill up the humongous venue, considering its location, Ciudad de Victoria in the neighboring towns of Bocaue and Santa Maria in Bulacan?

But that’s another story.

Soaked up on jazz at Rockwell, beer in Eastwood

Get ready to laugh hard in Greenhills: Rex Navarrete at Teatrino; all-star tribute to Fritz Ynfante at Music Museum