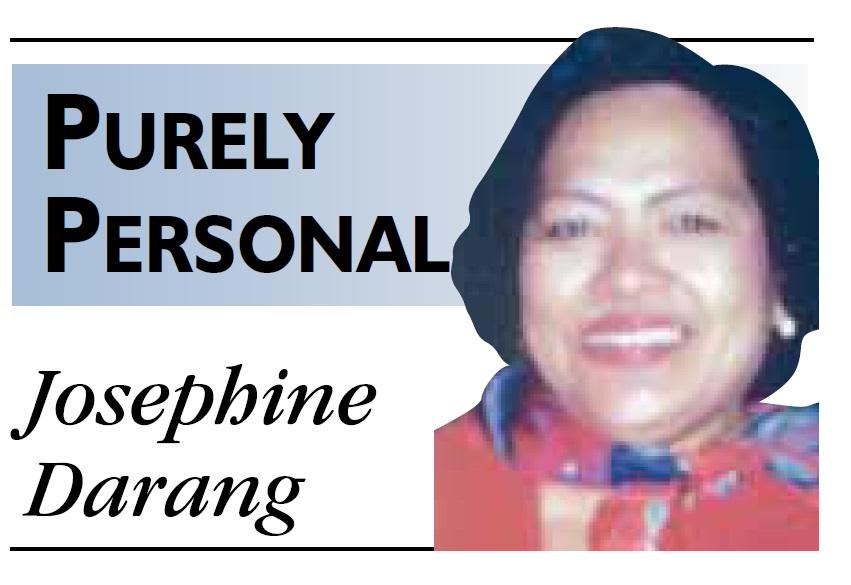 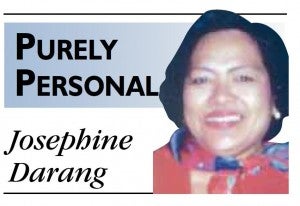 Josephine Darang, who wrote glowingly of miracles interceded for by the Blessed Mother and the saints in her well-read religion column in the Sunday Lifestyle Inquirer “Pure,” died on Saturday at the Philippine General Hospital. She was 68.

“We have lost a thoughtful, quirky and holy companion but gained another one in heaven,” said Leandro Jose Tesorero of the Embassy of Italy.

The embassy official, a friend of Darang, pointed out that she died on the feast of St. John the Evangelist, a patron saint of writers and editors like her.

He added that it was also propitious that Darang should die “within the Christmas season, the third day of Christmas, for she was Christ-centered, and on a Saturday, a day dedicated to Mary and the promise she gave to all the Brown Scapular and Marian devotees.”

Josie, as friends and associates called her, had been at the PGH for two months after she was discovered with a stage 4 cancer of the breast. She had surgery, but since she was a diabetic, her operation took a toll on her condition and, early this week, physicians said her body wasn’t anymore responding to dialysis.

Up to the time of her demise, Catholic priests and nuns would visit Darang in the ICU and even hold Masses and recite prayers for her, said her personal assistant, Noel Mogate.

Among her frequent visitors were fellow journalists such as Ishko Lopez, Rene Bisquera, Dennis Ladaw and Nini Yarte.

For more than two decades, Darang charted the devotional life of the Catholic Church with a spiritual zeal matching that of the heroic saints and martyrs she frequently wrote about in her column.

Because of her devotion to the saints, Darang was able to revive forgotten devotions such as the cult of Saint Philomena, said to have been martyred during the Roman persecutions. Although removed from the liturgical calendar because her existence was thought to be apocryphal, devotion to the saint has continued, especially promoted by writers like Darang who swear to the efficacy of her intercession.

Darang also wrote about religious relics such as the Relic of the True Cross in Tarlac and the Veil of Manopello (or the Veil of Veronica).

Since she was always writing about saints who founded congregations, she also used her column to promote their charities and raise donations for the “works of mercy” of religious orders, many of which labor in very poor mission territories here and abroad.

Priests from poor parishes in the provinces would write to her to raise money for church improvements and she would dutifully write about them in her column. Readers would respond by sending aid to the parish priests.

Born on Sept. 19, 1946, in Laoag, Ilocos Norte, Josie was educated all throughout her life in Catholic schools. From kindergarten to high school, she attended the Holy Spirit Academy in Laoag City; it was run by the Missionary Sisters Servants of the Holy Spirit (S.Sp.S.), the same congregation that runs the College of the Holy Spirit in Mendiola, Manila, near Malacañang.

“Studying under the S.Sp.S. nuns (both German and Filipino) means a strict upbringing in good manners and right conduct; not to mention the ability to use brains,” she wrote. “Also, the importance of God in our lives was inculcated so much in us that when we went out into the world after college, there was still the inner force that kept us from making fools of ourselves.”

Despite her Catholic education, Darang said she lived a “worldly” life when she started working in Manila as a writer and publicist in the 1970s. In fact, she was a regular of Coco Banana, the famous bohemian nightclub on Remedios Street, Malate, run by the late designer Ernest Santiago.

But in the late 1980s she turned her back on worldly life. This came when she became very sick and she considered herself on the brink of death. She was suffering from achalasia which prevented her from imbibing food and water as a result of the swelling of her esophagus.

Darang said she prayed to the Peñafrancia of Paco and had a successful operation under doctor William Olalia of the University of the Santo Tomas Hospital.

From then on, Darang devoted her writing and her life to promoting devotion to the Blessed Mother and to the saints and using her column to raise funds for Catholic charities.

Josephine Darang is survived by her mother, Lourdes Clemente Darang, sister Donna and brother Jose. Her remains lie at the Malate Church until today (Dec. 28) at 9 a.m.; after which they will be brought to Arlington Memorial Chapels on Araneta Avenue, Quezon City, for a one-day vigil. On Monday morning, they will be brought to Laoag. Burial will be announced later.