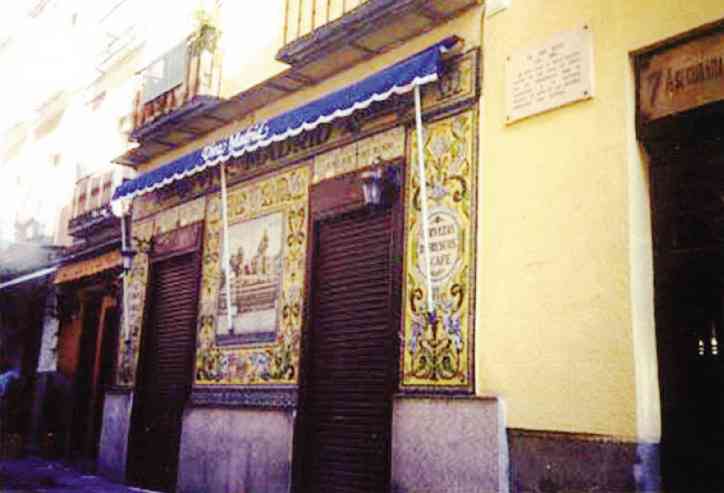 LOS Gabrieles, frequented by the Filipino Propaganda Movement, with murals between the main door

Looking for Jose Rizal in Madrid

During a stopover in Madrid from their studies at Universidad Internacional Menendez Pelayo (UIMP) in Santander, 24 Filipino scholars, including this writer, were toured by UIMP administration and Agencia Española de Cooperacion Internacional (AECI), in cooperation with the Philippine Embassy in Madrid, to retrace Jose Rizal’s footsteps as a young student and later as an expatriate in the Spanish capital in the late 19th century.

After his medical studies at University of Santo Tomas, Rizal left the Philippines on May 3, 1882, and arrived in Madrid in September 1882. He took courses in medicine at Universidad Central de Madrid as well as painting at Real Academia de Bellas Artes de San Fernando in Calle Alcala.

Rizal mentioned that he enrolled at Facultad de Derecho, but shifted to Filosofia y Letras, which he finished with highest honors on June 19, 1885.

Universidad Central de Madrid, now Universidad de Complutense de Madrid, has since moved to its new location at the outskirts of Madrid known as Ciudad Universitaria. It is a city within a city.

However, the old brick-and-plaster building where our national hero finished his medicine course still stands in its old location, and few classes are still being held there.

I visited the old university site during my first sojourn in Spain in 1962-63 while on a nine-month scholarship grant from Ministerio de Asuntos Exteriores in Madrid for my postgraduate studies in Spanish.

Returning to Madrid this time was sheer pleasure and an exhilarating experience as it gave me the opportunity to research and retrace more historical and cultural landmarks associated with Rizal.

According to Gregorio Brilliantes, “from 1882 to 1885 and during his second shortest stay in Madrid, in 1890-91, he lived in at least nine boarding houses, hostels or residences.”
He continues: “One of the reasons for Rizal’s frequent transfer from one boarding house to another and the search for the best possible rooming house was due to the fact that he wanted to look for a cheaper place in order to save, also the proximity of the place to his school, the tranquility of its neighborhood, for nights of study and writing; the state of the house itself and the composition of its tenants.”

Rizal also found it more convenient to stay in the center of Madrid to economize on transportation fares.

The same thing happened in Heidelberg where his three-story apartment   at Lutwigsplatz No. 12 Grebangasse was right across University of Heidelberg.

Rizal during this time continued to be busy with serious pursuits, with literary, artistic and patriotic labors, despite the many attractions, the spunky and joyous sounds of Madrid, because he had a mission to accomplish.

Our walking tour of Rizal’s Madrid began late afternoon near the center of the city, just off Puerta del Sol, the human and geographical hub of the city. Armed with a map of Madrid on which we marked off the streets where he had lived during his student days, we walked the narrow maze of cobblestone streets for several hours.

Time constraints and inclement weather, however, prevented us from continuing with our search for other sites related to Rizal’s life as a university student in Madrid. According to records, the following are the houses where he resided while he was in Madrid.

Amor de Dios 13-15. This is the first place where Rizal lived from Sept. 12, 1882, to May 1883, when he first arrived in Madrid, according to the registration form that he filled up on Sept. 12, 1882. This place is close to Facultad de Medicine and Escuela de Bellas Artes de San Fernando, but quite a distance from Facultad de Filosofia y Letras.

Calle de la Visitacion 8, c/-Fernandez y Gonzales 8, planta 3, puerta num. 4. Rizal transferred to this house in May 1883 and stayed here up to June 17, 1883, when he left for Paris. This place is situated in the old part of Madrid close to Plaza Santa Ana right behind the Teatro Español. The house still stands at the corner of Calle Echegaray which was called Calle del Lobo.”

Calle de San Miguel 7. (now Gran Via 22). Rizal lived in this place which was then a Pension, after his arrival from Paris. Ha had been staying there since Sept. 6, 1883, paying four pesetas a day excluding the cost of kerosene which he had to buy himself in order to have light.

Calle Bano 15. Piso Principal actually called Calle Ventura de la Vega. Rizal lived in this address from autumn of 1883 up to August 1884. It is also near to the Facultdad de Medicina and a walking distance from La Escuela de Bellas Artes de San Fernando but far from the Facultdad de Filosofia y Letras. The place housed the Circulo Hispano which was composed of Filipino students and Spanish sympathizers of the Philippines.

Calle Pizarro 13, 20 (now Calle Pizarro 15). Rizal lived with two classmates here from August 1884 to September 1885. It was near the Facultdad de Filosofia y Letras and the Universided Central de Madrid which was then located in Calle San Bernardo. It was also here where Rizal quietly started writing “Noli Me Tangere.” The building is now part of the Ministerio de Justicia.

Calle de Atochia 43. It was here where La Solidaridad was published. Old copies of paper carried this address. The flat is located on the first floor.

Calle Cedaros 11. Rizal moved to this house, which he shared with Ceferino de Leon and Eduardo de Lete because it was cheaper than at the Calle de Pizarro. He only had the intention of staying in that house for about 15 days, from Oct. 1 to Oct. 15, 1885.”

Calle de Echegaray, 17, now Los Gabrieles. This was also frequented by members of the Filipino Propaganda Movement of 1882. Rizal had described the two murals which are still there today, to his sister in one of his letters.

Other places of interest

Ateneo de Madrid is a private sociocultural club built by a group of liberal intellectuals in 1885 and it occupies one of the oldest buildings along Calle del Prado 21. Unlike its Manila namesake, Ateneo de Madrid is not a Jesuit school as we have been led to think, but an institution with its own library used as forum for liberal ideas in the past century. Rizal described it as “beautiful, vast, extensive and well-decorated.” It was where our hero would research and “regularly attended theatrical presentation, music and poetry recitals and books launchings during his student’s days there.”

Restaurante Ingles, since renamed “Viva Madrid,” is located on Calle Fernandez y Gonzales -7. Rizal took most of his meals during his stay in Madrid. It is still in its original site and has remained incredibly the same as in Rizal’s time. “This is also where they would normally find Graciano Lopez Jaena having his usual copa de vino,” said a guide book. “They would invite him to several glasses of wine so that he could finish his articled for La Solidaridad.”

Hotel Ingles, Calle Echegaray-7. A distinctive landmark is the Hotel Ingles where Rizal delivered his famous speech in the banquet held on June 25, 1884, in honor of Juan Luna and Felix Resurreccion Hidalgo for winning first and third prizes at the Madrid Exposition in 1884 their murals, “Spolarium” and “Virgenes Christianas.”

The Hotel Ingles is still in its original site, but slightly renovated. Nevertheless, it has retained its 19th-century ambience and has at the lobby paintings showing the hotel’s original look, testimonials and markers installed at the right portion of the wall to preserve the historical significance of the place. We slowly made our way to the ground floor lobby where some Rizaliana memorabilia, among them a bronze plaque with following inscriptions:

It was at Hotel Ingles on June 24, 1884 where Rizal delivered his impassioned speech exalting Filipino genius as illustrated by the victories of Luna and Hidalgo. What was touching was that when Pedro Paterno asked Rizal to make the toast, the latter was, in fact, hungry because he didn’t have money.

It was an emotional moment and an exhilarating experience to have travelled all the way to Madrid in order to have a glimpse of this historic landmark. While inside the lobby, time stood still and I felt as if I was being transported back in time.

Highlight of our walking tour was a visit to the Rizal Monument located in a well-lighted and -landscaped 70-meter corner lot donated by the mayor of Madrid on Parque Santander along Avda. de Filipinas in downtown Madrid. The monument, similar to the Rizal Monument at Luneta, has a four-meter high bronze statue sculpted by Filipino artist Florante Caedo. It was unveiled on Dec. 5, 1996 by Philippine Ambassador Isabel Caro Wilson.

We walked farther to the Cortes Espanola, now Congreso de los Diputados, just across the Plaza Cervantes, a park dedicated to the memory of Cervantes, the famous creator of Don Quijote de la Mancha and Sancho Panza. Rizal and his fellow expatriates used to congregate here where they conducted rallies and lobbied for the “Filipinos’ rights to autonomy and for equal rights with Spanish citizens.”

We rushed back to our hotel tired and exhausted but immensely happy that we were able to retrace Rizal’s footsteps in the maze of cobblestone streets where our national hero walked more than a hundred years ago.

Ramon M. Roda is a retired professor of Spanish and Rizal Course at the College of Commerce and Business Administration of the University of Santo Tomas.