Strengthen family ties by cooking and eating together Sinigang, adobo and paksiw are three dishes one would expect to be in every Filipino mother’s arsenal—go-to items tucked firmly in the pocket of the proverbial kitchen apron.

Market research conducted by Knorr, however, discovered that 80 percent of young people aged 23 to 27 lack confidence in their cooking skills. When these young adults eventually become parents, they might still not have the confidence to cook for their own families, especially if they’re working and are pressed for time.

This particular finding led to the creation of Knorr’s new “Sarap ng #LutongNanay” campaign and the launch of actress and celebrity mom Carmina Villaroel as its endorser.

“The aim of this campaign is not for mothers to begin whipping up fancy, complicated dishes. It also isn’t about how many times they cook in a week. We simply want more parents to cook with and for their children,” said Jessica Inocencio, senior brand manager handling Total Knorr. 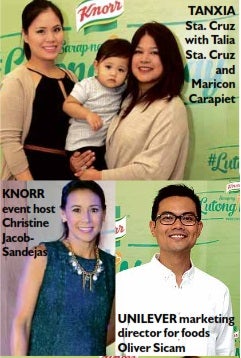 She explained how cooking with one’s family can be a bonding experience. The final product might not be picture-perfect but what matters is that you were able to provide your family with a nourishing meal.

“So many people eat out now and there’s nothing wrong with that; it’s a treat. Only thing is, you’re not exactly sure what goes on behind the restaurant’s kitchen doors. When you cook for your family, you can control what goes into each dish you prepare,” Villaroel told Inquirer Lifestyle.

She then narrated how she began cooking for her family after her husband Zoren Legaspi took up cooking classes.

“He’s the one who’s really interested in cooking, so I thought, I can do that, too. The first dish I cooked for my family was tinolang manok (chicken and papaya in ginger-infused broth). They loved it! My children are really appreciative, and Zoren is very supportive,” said Villaroel. 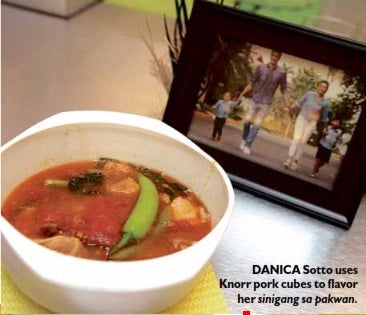 Since then, she has come up with several fool-proof dishes including sinigang na hipon sa sampaloc (shrimp in sour tamarind broth) and sinigang na liempo sa gabi (pork in sour soup with taro)—personal favorites of her twins Cassy and Mavy, respectively.

“I end up having to cook sinigang twice because my kids have different likes. I still find it very fulfilling because I’m able to cook for them,” Villaroel said.

The ties that bind 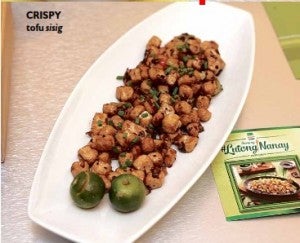 Neuroscientist Stuart Firestein, Ph.D from New York’s Columbia University, has been doing research on mothers who cook for their children for many years. “Flavors that a mother cooks up in her kitchen reach the parts of the brain, heart and soul that other things just can’t reach,” he said in a statement.

“What continues to fascinate me is how the brain instinctively knows that certain flavors and foods have the power to mean more to us than just sustenance. Even over time and distance, when we taste mom’s cooking, it transports us back to a special place and a unique memory,” he added.