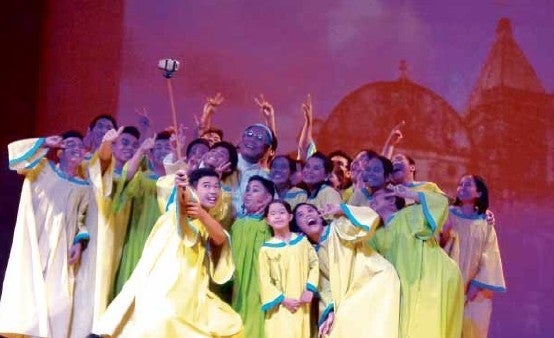 ANGELES CITY, Philippines—After playing many times to a full house in Angeles City, a musical about Pope Francis is moving to Metro Manila to be performed on the national stage for some 1,000 Filipino and Asian bishops.

“I Love Pope Francis” will be staged at the Cultural Center of the Philippines (CCP) in Pasay City on Jan. 17, the musical’s director, Andy Alviz, said.

The play depicts how Francis is bringing the teachings of Jesus Christ to a world mired in poverty and conflicts.

But how did the play get to be booked at the CCP?

Both Alviz and Pampanga Auxiliary Bishop Pablo Virgilio David credited Maria Mercedes Tuason, the Philippine ambassador to the Holy See, for the play’s move to the capital.

Tuason, a member of the Arrastia clan in Lubao town, Pampanga province, was in the audience during the play’s staging at Holy Angel University (HAU) in Angeles City on Dec. 12, 2014.

“We have to bring [the play] to Manila and Rome,” Alviz quoted Tuason as saying after the curtain call. Tuason telephoned CCP president Raul Sunico to help secure a venue and play date, he said.

Sponsored by HAU and San Miguel Corp., “I Love Pope Francis” is produced by Teatru Kapampangan, a collaboration of ArtiStaRita and the all-woman troupe Ima at Arte. They previously teamed up for the Church-themed zarzuela “Tulauk,” “Perry” and “Ciniong.”

ArtiStaRita’s first CD in 2005, which revived old Kapampangan songs, was funded in part by Sir Cameron Mackintosh who produced hit musicals like “Cats,” “Les Miserables,” “The Phantom of the Opera” and “Miss Saigon.” Alviz choreographed the Asia leg of “Miss Saigon.”

Will Pope Francis get to watch the two-act English musical, which has 24 original songs sung live by 5 priests, 20 young people and 30 or so professionals and businessmen?

Alviz replied by crossing his fingers.

Other gifts for Francis

The musical is not the only gift for the Pope coming from Pampanga, where the Augustinian Order began its first mission outside of Manila in 1572.

The other gifts for Francis are the coffee table book “Pisamban Maragul: The Living Church of Angeles City” by the Holy Rosary Parish, a white capiz Christmas lantern hand-painted with a smiling face of Francis by Daisy Flores and a letras y figuras painting by Alvaro Jimenez.

The cookies were originally intended as gifts to wish good health to family members and friends.

“It took me six [wooden] molds before I got the outline resembling the body of the Pope,” Borromeo said, adding that she had to go without the face of Francis.

Chef’s offer to cook for Pope

“His nose is too high that it gets chipped off during the baking,” she said.

International chef Rosauro del Rosario, 50, a native of Pampanga, is awaiting an answer on Friday to his offer to cook for Francis.

Del Rosario cooked for St. John Paul II at Coconut Palace when the Pope visited the Philippines in 1995.

“[But John Paul] only partook of the mushroom soup,” said Del Rosario, whose grandfather Silvino and father Jesus served as top chefs at Clark Air Base.