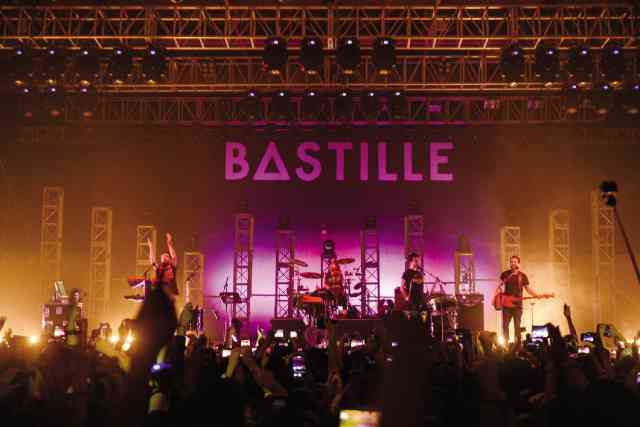 British band Bastille took its Filipino fans on a musical joyride to “Pompeii” and beyond in a fun-filled, high-energy concert, held Jan. 5 at the World Trade Center in Pasay City.

Aside from giving the predominantly teenage and 20-something crowd a massive dose of happy hormones on a Monday night, Bastille’s first-ever Manila show gave us five reasons to love the band and its music even more. Here’s the rundown:

The term “anthemic” may have become overused, given the plethora of fist-pumping songs ruling the airwaves. But there is no better word to describe Bastille’s repertoire, which satisfies the current generation’s penchant for catchy melodies, marching drumbeats and looping “whoa-ohs”—qualities that make a song a certified anthem.

Starting with the midtempo title track from its best-selling debut album “Bad Blood,” the band slowly worked its way through the 19-song setlist, building just enough momentum for the frenetic finale.

Upbeat singles “Laura Palmer,” “Things We Lost in the Fire” and “Icarus” were tempered with slower songs like “Laughter Lines,” “Overjoyed” and the piano ballad “Oblivion,” probably to give fans a chance to catch their breaths after all that jumping. Fans also proved their devotion to the band by singing along to lesser-known tracks like “These Streets.”

Smith introduced a new song, “Blame,” from the band’s upcoming sophomore album, as well as the recently released track “The Driver,” from last year’s “VS (Other People’s Heartache, Pt. III)” mixtape. The latter is also featured in BBC Radio 1’s rescoring of the 2011 Ryan Gosling film “Drive.”

It’s one thing to dance and sing along to Bastille’s songs on the radio; hearing them live and loud is quite another. Accompanied by blinding stage lights and the quartet’s onstage charisma, the music’s raw energy translates well into a live show.

The occasional antics from the band members added a bit of comic relief. During the “serious” song “The Draw” (which Smith referred to as an attempt at “being grungy”), the members put on pink bunny ears that some fans threw onstage. Also, Wood effectively filled the awkward gap during a technical glitch mid-set with a mind-blowing impromptu drum solo.

Smith’s rich, heavily accented vocals were consistently spot-on with each note; the frontman could hit low octaves and soaring falsettos with ease while bouncing up and down and urging the crowd to jump along. Which brings us to the next point.

Ever the reluctant heartthrob, Smith has a good reason for constantly jumping onstage. The 28-year-old frontman sheepishly confessed to a laughing (but completely smitten) crowd that he’s terrible at dancing, and that it’s the only move he knows how to do. How “adorkable” is that?

At one point, Smith commented, “I hate to be the dad here, but you all look very squashed up front. Could you please take a couple of steps back (for safety)?” But the fans closest to the stage refused to budge.

Ultimately, it was the fans at the back who were able to get some serious facetime with the frontman. During the closing song “Flaws,” Smith zipped himself up in a gray hoodie and ran halfway around the venue to mingle with the audience.

Although strong and steady throughout the concert, Smith’s vocals wavered from the mic as squealing teens tried to glomp him, much to the other band members’ bemusement.

It’s no secret that the band likes doing covers of old pop songs, both well-known and obscure, as evidenced by its freely downloadable mixtape series “Other People’s Heartache (OPH), Pts. I and II.” But what we (slightly) older folks love about Bastille is that it makes the early music genres palatable and cool for the selfie generation.

With its signature synth-based melodies, the band’s sound pays homage to the Europop and rock greats of the ’80s and ’90s. Bastille’s reggae-rock singles “Things We Lost in the Fire” and “Bad Blood” carry elements of ’80s punk and new wave (think Sting and the Police).

Meanwhile, the band’s electronica track “Of the Night” is a mash-up of ’90s Eurodance hits “Rhythm is a Dancer” by German group Snap! and “Rhythm of the Night” by Italian band Corona. The song revives the euphoric disco vibe of that era (minus the poufy hair and shoulder pads, of course).

Another better-known mash-up would be “No Angels,” Bastille’s indie-rock rendition of TLC’s hiphop hit “No Scrubs” remixed with The xx’s “Angels,” from the “OPH Pt. 2” album.

It’s amazing to hear younger fans singing along to these songs that were most likely popular when these kids were literally still in diapers.

Predictably, the band capped the night with the high-energy hit “Pompeii.” It was embarrassing (and more than a little annoying) to see that a lot of people completely ignored Smith’s repeated requests to put away their gadgets and just enjoy the song. Then again, we couldn’t really blame fans for wanting to capture and replay such an incredible, adrenaline-filled moment.

Amid swirling white confetti, the crowd heartily sang and jumped along with the vocalist, forming triangles with their fingers to stand for the delta sign in Bastille’s stylized name.

We all went home with the infectious “Eh-eh-o, eh-o” intro still ringing in our ears and a pleasant post-concert high.

Not a bad way to kick off an exciting year in concerts.