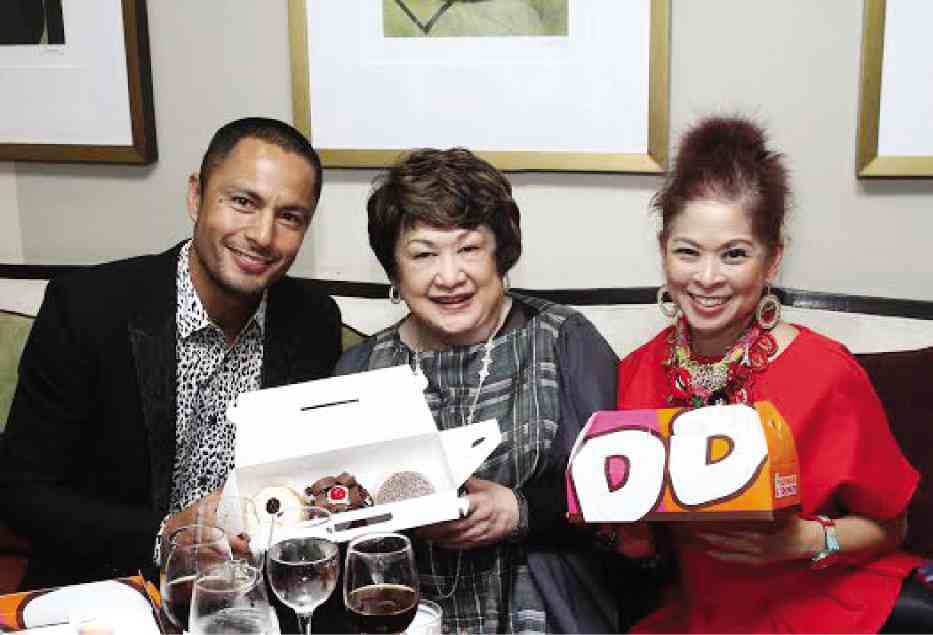 AFTER the private screening, Derek Ramsay with Virgie Ramos and Tessa Valdes, and Dunkin Donuts

Apart from the visit of Pope Francis this week, people are talking about the surprise hit movie “English Only, Please” starring Derek Ramsay and Jennylyn Mercado, and Vice Ganda’s one-on-one with President Aquino. When you hear the staff of the hair salon small-talk about it, then you know people are really interested in the subject.

The President’s love life, or lack of it, has an almost preternatural way of eclipsing everything else in any interview with him, no matter that there are more things to point out in his defy-all-odds governance. So, it wasn’t surprising that many viewers’ takeaway from Vice Ganda’s interview was the President’s zero love life.

To be accurate, his love life hasn’t always been zero. It wasn’t in the past two years. But it came as a surprise to me when, over lunch last November, after the inauguration of the Coca-Cola Femsa plant in Laguna, he told me abruptly, “It’s really Coke Zero.”

He explained that what he had lightheartedly mentioned earlier that morning in his Femsa speech about his love life being Coke Zero was true.

It was true last November, and it is true to this day.

More than, say, the rate of unemployment or the update on the PPP projects, people, almost as a knee-jerk reaction, wonder about his love life and ask why can’t P-Noy have a girlfriend—or a wife?

The answer then and the answer now is, the presidency isn’t conducive to a long-term relationship, to say the least. In P-Noy’s case, add destiny— made more pronounced after his father’s death—to the burden of the presidency. There must be times he must feel that a lasting relationship isn’t for him in this lifetime, but there must also be other times he feels that, yes, he can get married this year. (Before he leaves office—you’ll never know.)

To me, however, as interesting as his love life is his love of music. It is like a coping mechanism where his love life is concerned. It is music which is a constant in his life, whether as private citizen or as President, and which helps him chill at the end of the day. It is his playlist—extensive, varied and beautiful—that helps him cope with the moods of being in love—or falling out of love.

He’s been an audiophile almost all his adult life, and one doesn’t realize just how much of a music enthusiast he is until one sees how much he pays attention to sound equipment and technology, how assiduous he is in selecting his music, and how vast and good his playlist is.

He has songs and music he shares with friends to suit their tastes and moods. Jazz, standards, R&B, ballads, instrumentals, pop, OPM—music across genres and eras, he listens to them. To one like us who’s stuck in ’70s and ’80s music, it is comforting to listen to some of P-Noy’s playlist. As I coped with the loss of my parents last year, he introduced me to Jane Monheit, particularly her version of “Moon River” (I’m also stuck with Audrey Hepburn).

His dream of a post-presidency chill, one imagines, must be to join the backup of Al Jarreau—my guess.

So, to those who keep wondering and fretting about the presidential (non) love-life, “chillax,” he has his music. That’s as good as it gets—for now.

Last Wednesday, we had a movie date we couldn’t stand up: Derek Ramsay.

We’d already seen his “English Only, Please” but, hey, if the invite was to see the movie with Derek himself, who would not want to see it again?

Swatch’s wonder woman Virgie Ramos organized a private screening of the movie for Derek, a Swatch brand icon and her good friend, and for the people who had been clamoring to see the movie—but with Derek.

“English Only, Please” earned for Derek the MMFF Best Actor award, and for his costar Jennylyn Mercado, the Best Actress trophy. It’s about a New York-based Fil-Am (Julian, played by Derek) who’s looking for an English-Filipino translator in Manila to convey his words of spite for his Filipino girlfriend who had dumped him. A very simple story, with nifty characterization, laugh-a-second dialogues, perfect chemistry between Derek and Jennylyn, and award-winning acting.

We had fun watching the movie the first time. The close-ups told the story, made the funny lines even funnier and the poignant moments even more so. The movie is well-written to begin with. Of course, it didn’t hurt that Derek is so good-looking—we would learn later from him that he didn’t even wear makeup—and that Jennylyn has such a luminous face, it radiates.

Waiting for the screening to start, we got to chat with Ramsay Sr., Derek’s dad, who went down memory lane. A Brit, he was a policeman in London when Derek Jr. was born, his second child. The baby was only three weeks old when he was brought by his dad and Filipino mom to live in Manila. After the birth of his third child, Ramsay Sr. decided to pack up his bags and move the family to Manila.

And he said he never regretted the move. His mom, Derek’s grandmother, is now 94 years old and lives in Kent. Mother and son Skype every day to talk and see each other. No wonder, we thought, Derek is so family-anchored.

Unlike other stars, Derek is naturally warm and gracious. He has this habit of rounding up friends—who have no close kin to spend the holidays with—to celebrate Christmas Eve with him, usually in the family home in Tagaytay.

Last Christmas, he had theater actor Jerald Napoles in his home—Napoles is “Tolits” in “Rak of Aegis” (a musical we love) and has a hilarious cameo in “English Only.”

Derek came late to the screening because he was stuck in traffic. When he walked in the cinema, the audience shouted the now-famous line in the movie: “Traffic sa Edsa!”

Derek sat between me and Sea Princess (Tessa Valdes) at the screening. I told him I had already seen the movie, and now I would watch him.

Did he ever expect to win Best Actor? No, he said. But he liked the material the moment he saw it, he said.

As we watched the movie again, sometimes he’d say which lines were improvised (his entire wacky scene with Napoles—“Where do you lift?” “Where’s the light?”).

I passed on to him our colleague Alya Honasan’s message—her favorite scene was him talking about his mom and baring his soul.

Another funny scene had him and Jennylyn arguing before a tricycle driver.

As the scene came on, Derek said, “That’s actually my driver!”

We enjoyed seeing the movie the second time, and casting a side glance at Derek 80 percent of the time (20 percent, we’d eavesdrop on Tita Virgie’s comments—she loved the lighting and believed it was one of Derek’s best-lit movies).

Derek said an idea for a sequel has been broached.

This week will even be better—with Pope Francis.